Despite Almost 40% Of Shiba Inu Holders Being "Out Of The Money", Most Are Still Reluctant To Sell — Here's Why

Whale-level investors have been on an accumulation spree of the dog-themed meme coin Shiba Inu. SHIB has maintained about 7% dominance among the top 1000 Ethereum whale wallets, topping all other tokens as they held more than $1.5 billion worth of SHIB tokens according to WhaleStats which tracks the metric.

However, amidst the descent in the price of SHIB over the last 4 weeks where it has fallen around 6.25%, the value of the whales’ holdings has dropped by more than $200 million, as has the dominance of SHIB among their holdings. At the moment, the total SHIB holding of the class of investors is worth nearly $1.5 billion and SHIB has been surpassed in dominance by the FTX token, the native token of the FTX cryptocurrency exchange ecosystem.

In the broader market as well, data shows that a lot of SHIB holders are currently underwater in their investments. According to the blockchain intelligence platform, IntoTheBlock, around 38% of SHIB holders are “out of the money” going by the price at which they bought into the market. 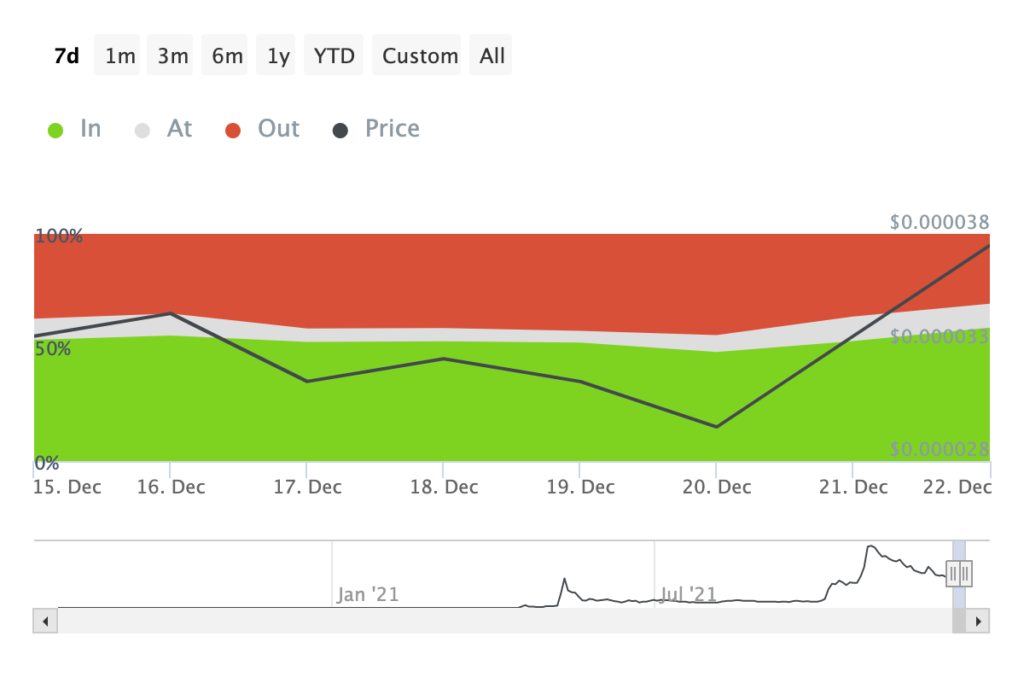 Despite this, market players are disinclined to sell their SHIB holdings. One key market player specifically revealed that despite currently being 35.6% in losses since buying around 30 billion SHIB tokens for circa $1.5M, they were not vending.

This sentiment seems to be shared by a lot of other SHIB holders despite the price being down around 66.9% from its all-time high of around $0.000087 reached in October.

Sentiments guided by other developments in the SHIB ecosystem

The strong holding sentiment among SHIB investors may be a result of the amount of adoption that the meme coin is being opened up to due to the developments happening in the Shiba Inu ecosystem.

Recent announcements from the Shiba Inu Core Developers (SICD) have been driving optimism for the future of SHIB. According to Eric M, a Shiba Inu Core developer, market participants should be on the lookout for Shibarium, Shiba Inu’s layer 2 scaling solution, “soon.”

The L2 solution is billed to make transactions cheaper and faster than they already are on the Ethereum-based blockchain network. It will also play a key role in improving the user experience of Shiba Inu’s own iteration of the metaverse which is in the works according to the pseudonymous creator of the meme coin, Ryoshi.