Bitcoin Price Should Hold on to $31,500 level. Will BTC Ignite a Bullish Rally In Coming Week?

The minimal volatility of cryptocurrency markets is expected to persist. Bitcoin has recently suffered a number of setbacks, notably China’s regulatory crackdown, which was prompted in part by concerns over high energy use.

Also, according to On Chain Analysis ( Glassnode ), Bitcoin bull markets are driven by retail. It’s a bear market warning when they stop buying, and it appears that they haven’t stopped buying.

Bitcoin is currently struggling to stay above $30,000, as bears appear to be attempting to drive prices below the important $30k barrier. It is critical for BTC to maintain its current price of $31,500. Currently, the market attitude is unfavorable.

Furthermore, Bitcoin Price must push higher to the first pivot resistance level of $32,356 on the upside. $32,876 and $33,516 are the second and third resistance levels, respectively. If it succeeds to break through the aforementioned Resistance levels, though, the crucial $34000 level enters the picture.

If BTC can't reclaim orange as support, today's recovery could merely be a relief rally to confirm orange as resistance#Crypto #Bitcoin https://t.co/p5SUY9zMjg pic.twitter.com/n31ps2cFQq 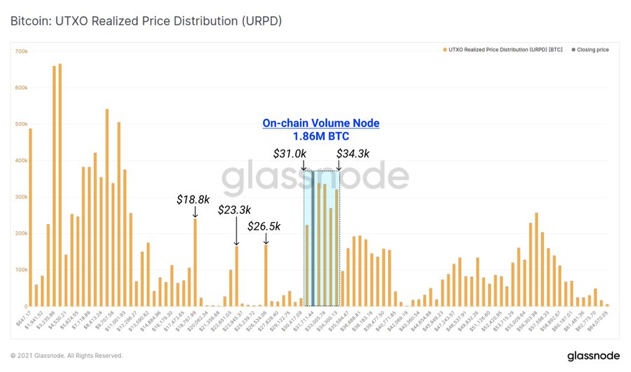 Between the prices of $31k and $34.3k, nearly 1.86 million $BTC were transferred on-chain, accounting for 9.93 percent of the circulating supply, according to on-chain analytical site Glassnode. According to them, it is the greatest realized volume cluster since $12,000. 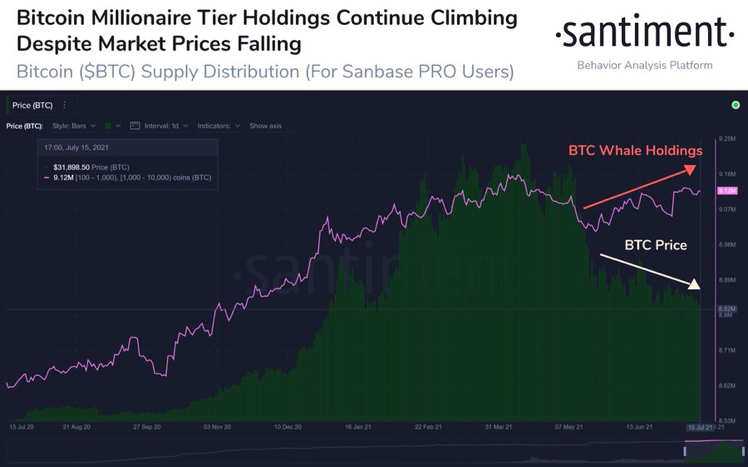 According to santiment, the millionaire tier of $BTC addresses with 100 to 10,000 BTC continues to rise. Since May 21st, the total value of these whales’ holdings has climbed by 100,000 $BTC.