Binance Coin (BNB) Soaring At Breakneck Pace, But A Potential Price Crash Could Be Looming

Binance Coin (BNB), the Binance exchange native token that also drives the Binance Smart Chain, has reached a new high lately. At the moment, BSC is Ethereum’s only competitor among DeFi ventures, with fees that are significantly lower than that of ETH.

In reality, BNB has been the hottest cryptocurrency in 2021 so far. As a result of Ethereum’s high gas fees and sluggish transaction execution, other less decentralized but nevertheless quicker as well as cheaper blockchains, including the likes of Binance Smart Chain (BSC), gained some much-needed traction.

Trading volumes on crypto exchanges have risen in recent months as interest in cryptocurrency, in general, has grown, resulting in increased income via trading fees for various crypto exchanges. If this incredible growth rate persists, then BNB has a strong chance of overtaking ETH in terms of market capitalization and replacing it as the second biggest cryptocurrency right behind the current leader, Bitcoin.

Binance’s initial coin offering (ICO) took place in 2017, and BNB was trading at about $1. Just a few months ago, the price had been approximately $50. It has now experienced a growth rate of over 1,000% in a relatively short amount of time.

The BNB rally has been accelerating at a breakneck pace, with BNB breaking through the $400 barrier on April 6th. BNB has also already surpassed 35% of Ethereum’s market share, implying that the token will need to more than triple in value to overtake its main rival. 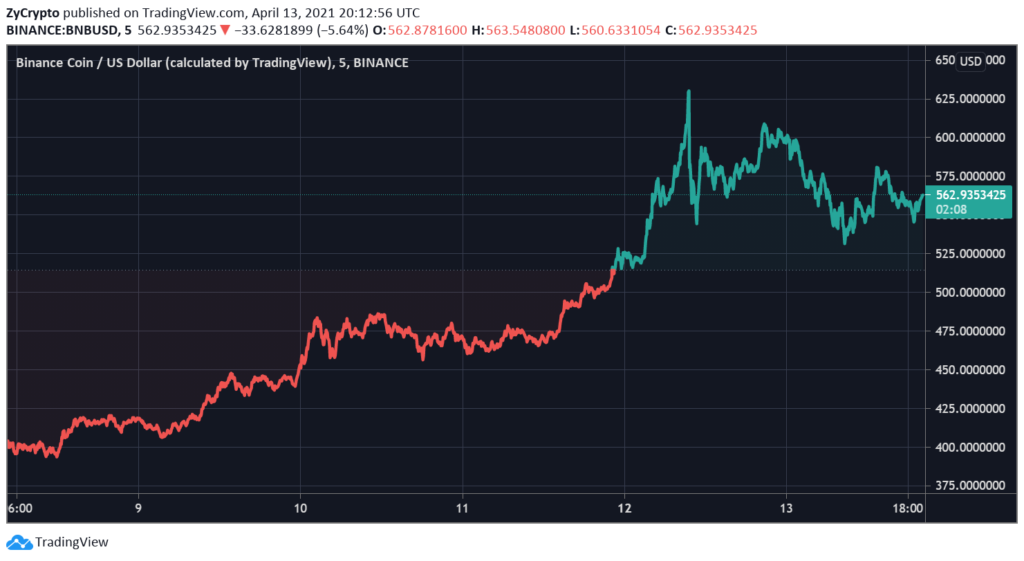 Not Everyone Is Sold On Binance

Because of its low fees, Binance Smart Chain has emerged as a viable Ethereum substitute in the last month, with apps like PancakeSwap challenging Uniswap, the leading DEX.

Messari’s Ryan Watkins, on the other hand, recently took to Twitter to express his dissatisfaction with BSC’s centralization. According to him, the main reason why BSC is quicker and more scalable is not due to any miraculous technical advancement. Instead, he insists it’s the power of centralization.

Binance has enormous scope and power, which it has used to bring in new users into its ecosystem. Binance executes on a regular basis, and that is why BNB is thriving according to most analysts. Still, a crash could occur as is so often the case with cryptocurrencies, and so investors should proceed with caution in a time of such volatility.