Borrowing reached the highest ever level in the post-war period thanks to the virus, and the latest figures regarding Government debt show the grim reality of the nation’s finances following one of the worst economic and human disasters in recent history. Britain’s economy has now recovered to pre-pandemic levels following a swift rebound thanks to vaccines and the easing of longstanding restrictions.

While a rebound is good news, it doesn’t necessarily spell sustained long-term recovery.

According to the Office for Budget Responsibility (OBR), the UK’s GDP is just 0.8 percent below the level it was at in February 2020, right before the pandemic hit Britain.

The Government’s budget deficit – the gap between spending and income – has improved from a record £355 billion in the year to the end of March 2021, when it stood at the highest level ever recorded in peacetime.

Figures published by the Office for National Statistics show borrowing fell to £21.8 billion in September, down from £28.8 billion in the same month a year earlier, as support measures such as furlough for the virus were unwound.

Economists had expected a slightly higher level of borrowing of £22.6 billion in September after the economy began slowing down as a result of petrol shortages and a lack of raw materials that forced factories into cutting output.

It was still the second-highest September borrowing since comparable records began in 1993.

The Institute for Fiscal Studies estimates that borrowing could come in about £55 billion lower than forecast by the OBR in March, at about £180 billion for the current financial year.

However, the Chancellor is facing a large rise in inflation that will boost the cost of servicing the national debt – but this is something the Chancellor seemed to be embracing in his Budget on Wednesday. 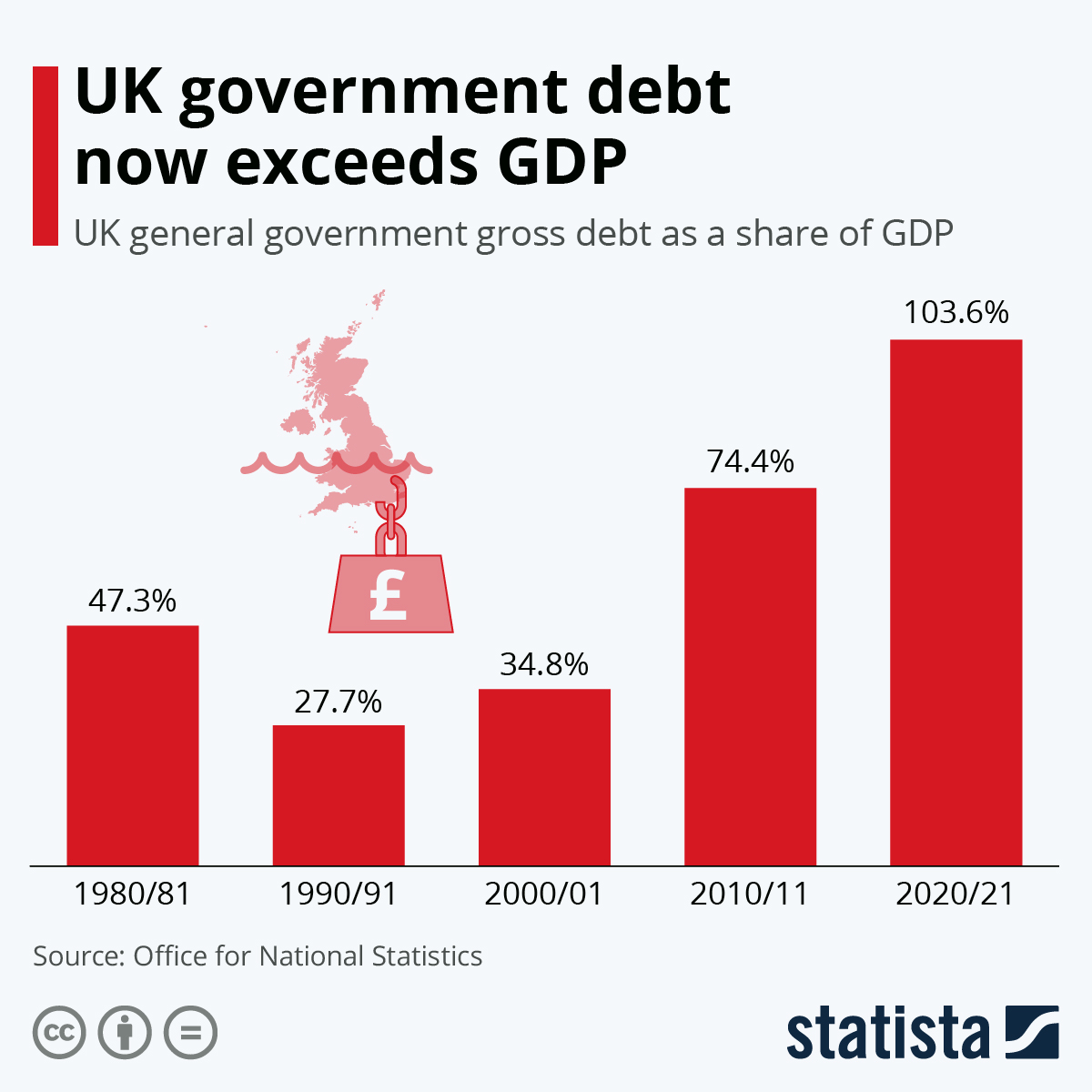 Inflation is expected to peak at five percent – more than double the Bank of England’s target.

Government debt rose from about 80 percent of GDP before the pandemic close to about 96 percent, the highest level since the 1960s.

Despite these increases, a group of 70 leading economists said the cost of paying off the national debt is at the lowest levels since the 1950s.

Mr Sunak insisted during the Budget that the Government’s aim is to keep a lid on inflation before it squeezes the finances of everyday people.

He said: “I understand people are concerned about inflation — but they have a government here ready and willing to act.”

In comparison with other countries, ONS data does show however that the UK is 12.3 percentage points above the EU average on this measure.

This means the UK is in a better position than Cyprus, Belgium, France, Spain, Portugal, Italy and Greece – the latter still struggling with debt at 207.2 percent of its GDP.

Walid Koudmani, market analyst at financial brokerage XTB , told Express.co.uk: “During the budget announcement Chancellor Sunak indicated he was optimistic on unemployment and stated that GDP growth has been revised positively by the OBR from four percent to 6.5 percent while warning that inflation could persist at a rate of over 4 percent.

“In addition, he stressed the importance of preparing for the possibility of a future crisis and the potential need to act to tackle inflation in the short term as it could continue to be an issue for several months.

“Furthermore, the Chancellor said that day-to-day spending would be funded from taxation and not from borrowing, highlighting that underlying public debt as a percentage of gross domestic product must fall.

“Today’s budget announcement could play a key part in reassuring investors and consumers about a wide variety of issues but could also lead to some doubts regarding the feasibility of implementing it.”