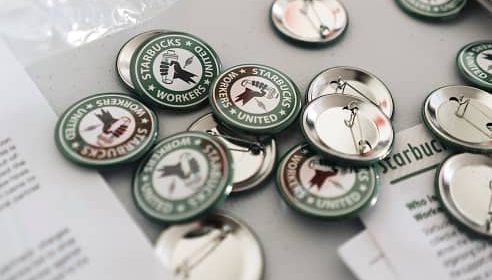 "We see unions as the best way to make Starbucks a place to have a sustainable career and a true partnership," the organizing committees for the Commonwealth Avenue and Harvard Street cafes in Boston wrote in a letter to Starbucks CEO Kevin Johnson.

It comes after a historic win for Starbucks workers last week, when employees at one Buffalo cafe voted to form the first union for baristas who work at a company-owned location under Workers United New York, a branch of the Service Employees International Union. Another Buffalo cafe is waiting to hear the results of its union election due to challenged ballots, while a third voted against unionizing.

Three more Buffalo-area locations have filed for elections, as well as a cafe in Mesa, Arizona. Johnson said on CNBC's "Mad Money with Jim Cramer" on Nov. 7 that he expected a handful more stores to organize.

The union push has faced strong opposition from Starbucks management. In Buffalo and Mesa, the company has sent executives to locations that are seeking to unionize, a move that Starbucks Workers United has called "union busting." The company has denied allegations that it was trying to intimidate workers. Ahead of the ballot count in Buffalo, the coffee chain also sought to open the election up to all 20 locations in the market — a move that typically favors the employer— and delay the count, although the National Labor Relations Board sided with workers.

Starbucks did not immediately respond to a request for comment from CNBC.

Shares of Starbucks were down less than 1% in premarket trading. The stock has risen 7% this year, giving the company a market value of $135 billion.