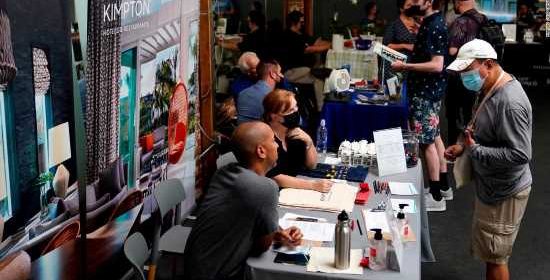 At 184,000 claims, adjusted for seasonal swings, it was the lowest level of initial claims since September 1969, when the figure stood at 182,000.
It was also a lower count than economists had predicted. It’s further proof that America’s jobs recovery is pushing ahead this winter, with employers vying for staff and workers having plenty of jobs to choose from. Companies are still have a hard time keeping up with the buoyant demand for goods and services, not least because they are struggling to find workers.

As of October, the nation had 11 million jobs available and not enough people to fill them.

But according to Thursday’s Labor Department figures, claims actually rose by more than 60,000 to a total of 280,665 last week without the seasonal adjustments.
“Usually, it is not really worth discussing seasonals as the adjustment process is usually well calibrated and does a good job smoothing out the expected wiggles,” said Jefferies Money Market Economist Thomas Simons in a note to clients.
But the pandemic has complicated this a lot. Last summer, when claims were still in the millions, the Labor Department made a change to its adjustment methodology. And it’s still using this new methodology now that claims are back to pre-pandemic levels, Simons said.

On top of that, there is the holiday season: Even though claims have declined steadily since September — dropping to an initial 52-year low in November — the holiday season, starting with Veteran’s Day and ending only with Martin Luther King Day in February, is a period of heightened volatility, according to Mike Englund, chief economist at Action Economics.
In spite of the volatility, Englund thinks the claims data suggest a strong jobs gain in December.
Source: Read Full Article