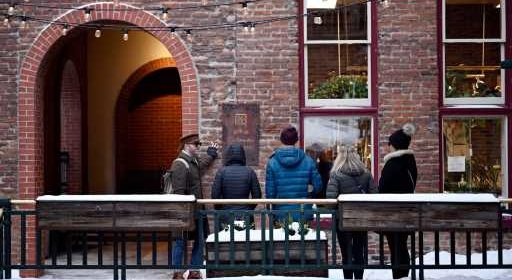 Another chapter came to a close for downtown Denver’s historic Larimer Square when Gusterman Silversmiths, the last remaining original tenant, locked its doors for the final time on March 31.

The business, which was at 1418 Larimer St., is now operating as a private jeweler. First opened in 1964, it touted almost six decades of jewelry design expertise. Mary Eckels, a metal artist, has owned Gusterman Silversmiths since 1978.

“It’s the end of an identity,” she said in a telephone interview. With her lease to expire at the end of March, part of Eckels’ decision was influenced by advice from her eye doctor to reduce stress in her life.

This is just the most recent hit to one of Denver’s most iconic retail districts, as COVID-induced economic troubles and other issues have forced several longtime tenants of the area to either shutter permanently or move locations.

Eckels is taking the big change in stride. With plans to build a new, private workshop, she views her transition as a positive experience.

“I am probably the happiest I’ve ever been in my entire life – and I’ve had some really good times,” Eckels said.

She plans to offer customers the same services they’ve relied on over the years, and will continue working with her three other artists – although not in a shared space all together.

Eckels announced upcoming changes on her business’ Facebook page on March 3, citing that the “new facility will be available by May 2022.”

Larimer Square was the site of many of the city’s firsts: its first block, with its first city hall and residential house – and, eventually, its first designated historic district in 1971. While it’s now home to hot spots for dining, shopping, nightlife and more, the square was initially where General William Larimer and his son settled down to construct a log cabin in 1858, according to the National Trust for Historic Preservation.

Denver preservationist and developer Dana Crawford ensured the area’s longevity when she created and put together Larimer Square in 1965. “It was my idea, and it turned out to be just so much more difficult than I had ever imagined,” she said in a telephone interview. But, “it’s still there.”

The news about the closure of the Gusterman storefront saddens Crawford, adding that she receives a gift made by the business every Christmas.

“Gusterman’s would be just a column by itself of success through all these years in Larimer Square,” she said.

Crawford sold the block to the Hahn Company, a now-defunct shopping center developer, in 1986, and it was eventually acquired by Jeff Hermanson in 1993.

In 2018, the National Trust for Historic Preservation included Larimer Square on its annual list of “America’s 11 Most Endangered Historic Places.” The privately-funded nonprofit organization said it was then “threatened by an inappropriate development proposal that calls for partial demolition of several buildings, the potential construction of two towers, and weakening the groundbreaking ordinance that has long protected the famous square.”

Hermanson and partners at real estate firm Urban Villages offered the plan “to seek amendments to the historic district protections in order to exceed the existing height limits to build two tall buildings” and partially destroy historic buildings in the process, according to organization Historic Denver.

The preservation group, Crawford and others pushed against amending Larimer Square’s legal protections over a months-long advisory committee process, arguing that it would “have far-reaching and dangerous policy consequences for historic buildings and districts citywide.” In 2019, Hermanson and Urban Villages backtracked on the plan to no longer include the demolition of historic structures.

Hermanson went on to sell Larimer Square for $92.49 million to Asana Partners, a real estate investment company headquartered in Charlotte, N.C., in December 2020. It took over ownership of 25 properties totaling about 250,000 square feet and the block’s parking garage.

“We are honored to be the next steward of this iconic portfolio,” said Brian Purcell, managing director at Asana Partners, in a statement announcing the acquisition. “We plan to invest the necessary capital to both restore and preserve the historic nature of these buildings within their existing footprint and improve the spaces to meet the expectations of today’s retail and creative office tenants.”

The firm didn’t immediately respond to a request for further comment on its plans for Larimer Square.

“It’s been a very special, special place, right from the day it opened, because of the people it attracted,” Eckels said. However, the coronavirus pandemic did shift the social dynamics of the square, with several businesses shuttering for good as a result. Euclid Hall Bar and Kitchen, The Market at Larimer Square and TAG Restaurant were among those that closed.

Victoriana Antique & Fine Jewelry, 1417 Larimer St., is now the longest-standing store in Larimer Square, said owner David Prebble in a telephone interview. It was first established in 1977, and he purchased the business in 1984.

Prebble reminisced on his experience with Gusterman Silversmiths in 1968 when, upon graduating from high school, he bought a silver ring from the store for $28 in lieu of a class ring. He described Eckels as “an exquisite craftsman.”

“She’s going to be missed because she was just always a kind-hearted soul – always wanting to do anything for any of her neighbors,” Prebble said.

Bill Moore, a longtime customer at Gusterman, highlighted two sentimental pieces that Eckels made: The 25th and 50th wedding anniversary presents he gifted his wife, Lorna.

Both Moore and his spouse have remained loyal clients of Eckels for 40 years “because of the personal service she provides,” he wrote in an email. “Her decades in Larimer Square have made her a Denver fixture.”

He plans to continue his patronage, adding that “at least the parking will be easier.”

Buckley first joined the community as a pop-up shop in the midst of the coronavirus pandemic during July 2020, occupying a space on the square for six months. “It completely changed my life,” she said. Buckley secured a permanent spot in February 2021, but plans to “unfortunately” vacate in the next few weeks.

She pointed to Eckels’ kindness. “It’s just so sad to see her go.”