Fifteen women who received Johnson & Johnson’s COVID-19 vaccine have developed a rare type of blood clot in their brains, officials disclosed in slides that are going to be presented at a Centers for Disease Control and Prevention meeting on Friday afternoon. Three of the clots were fatal, according to the slides.

Officials had previously disclosed that a 45-year-old Virginia woman died in March after receiving a Johnson & Johnson vaccine. The CDC and public health officials are currently investigating the death of a woman from Oregon who was in her 50s. Details on the third clot death after vaccination have not yet been shared.

Seven of the clot patients remain hospitalized (four of them in intensive care), while five others have been discharged home.

An independent expert panel is meeting today to assess the risk of blood clots after the shot, and whether J&J’s vaccine should be available in the US. It comes 10 days after the CDC and FDA paused distribution of J&J’s shot following initial reports of six rare blood clot cases, all in women under 60.

On the call today, advisors are reviewing slides that suggest the risk of clotting is highest for women between the ages of 30 and 39. There are no reports of these rare clots in men. 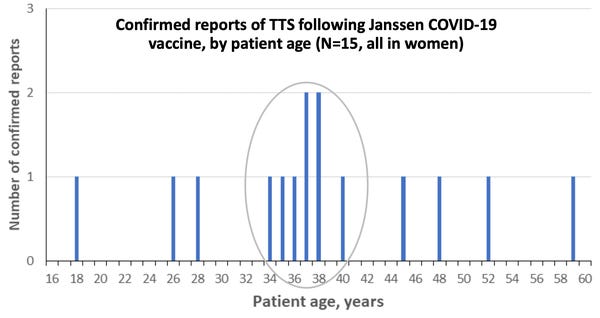 Health experts are eager to continue using the shot, which is the only one dose vaccine authorized for use in the US. As such, it’s possible that the vaccine will be unpaused with a warning to certain groups, like younger women.

However, advisors say it’s been difficult to make a clear call given the lack of data.

“It affects people that are younger in age, and seems to affect women more than men — so far,” Dr. Michael Streiff, medical director at The Johns Hopkins Anticoagulation Management Service and Hemostatic Disorder Stewardship Program said during his presentation at the meeting.

Women under 50 had a seven in a million chance of developing a blood clot, according to the data to be presented to the CDC panel, while the risk was less than one per million for women over 50 and men.

The panel of experts had met last week to assess the situation, but ultimately decided they wanted to wait and see if more of these unusual cases surfaced, as millions of Americans had only just gotten the J&J shot. 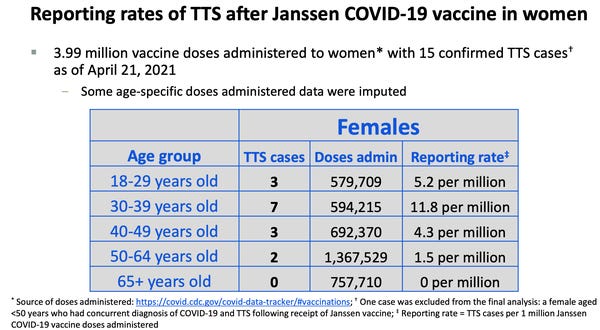 These cases of cerebral venous sinus thrombosis (CVST) in women have popped up anywhere between six and 13 days post-immunization, meaning that there was a good chance that people who were injected before the vaccine was paused last week could still develop clots.

It’s still unclear what might be causing the clots, but one of the leading hypothesis about what’s going on is that these patients are having a rare, autoimmune reaction to the vaccine, similar to what happens to some people who take the blood thinner heparin (autoimmune heparin induced thrombocyotpenia).

Autoimmune heparin-induced thrombocytopenia is extraordinarily rare, Streiff said. “I couldn’t give you a number, I can just tell you from my experience treating these patients, I’ve just never seen it,” he said.

This type of clotting issue doesn’t generally affect one gender more than the other, Streiff added. 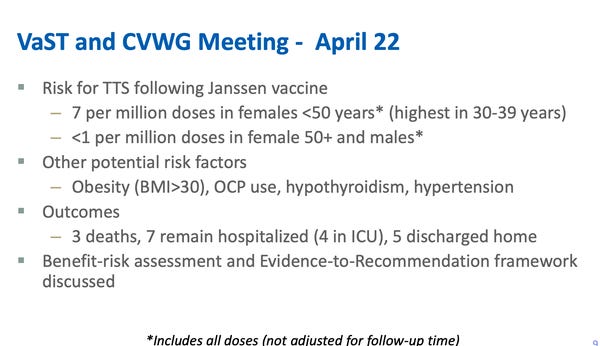 Advisors are leaning toward reintroducing the drug with a new warning label attached, but wanted to get a sense how rare or common these clots were before making a decision.

“Is this a needle in a haystack or the tip of an iceberg?” committee member Dr. Sandra Fryhofer said during the April 16 meeting.

There are several widely used medications that carry a rare risk of blood clots, like contraceptive birth control. But the J&J situation is unusual because not only did patients develop a rare form of blood clot in the brain (CVST), but they also experienced low levels of the platelets that form blood clots.

Health officials have cautioned that giving the common treatment for busting blood clots, heparin, is dangerous in this situation.

Should the advisory committee make a decision to continue using J&J’s vaccine on Friday evening, the shot could be back in wide circulation within days.