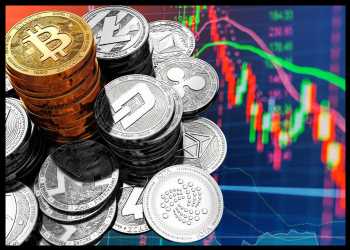 Stock markets in Asia and Europe traded mostly in the red whilst Wall Street futures portend marginal gains on opening.

The Dollar strengthened marginally against major currencies, with the Dollar Index (DXY), a measure of the Dollar’s relative strength rising to 105.15, versus 105.10 a day earlier.

4th ranked BNB (BNB) added around 0.80 percent. Meanwhile, Changpeng Zhao, the CEO of Binance CEO has in a tweet stated that the exchange has no outstanding loans.

7th ranked XRP (XRP) is trading with overnight gains of more than 1.4 percent.

8th ranked Dogecoin (DOGE) edged up 0.2 percent but is still 8 percent lower on a weekly basis.

9th ranked Cardano (ADA) edged 0.1 percent lower and is the only crypto among the top 10 to trade on an overnight negative basis.

38th ranked EOS (EOS) is the biggest gainer among the top 100 with an overnight rally of 5.4 percent.81st ranked Nexo (NEXO) also added 5.3 percent.

41st ranked Trust Wallet Token (TWT) is the biggest gainer on a weekly as well as year-to-date basis.

50th ranked Axie Infinity (AXS) is the greatest laggard among the top 100 with an overnight decline of 6.5 percent.

Meanwhile, The New York Times has reported that Federal prosecutors are investigating whether Sam Bankman-Fried and his hedge fund orchestrated trades in a way that led to the collapse of the two interlinked currencies viz TerraUSD and Luna, in May. Prosecutors in Manhattan are examining the possibility that Mr. Bankman-Fried steered the prices of the two cryptocurrencies to benefit the entities he controlled.

Do Kwon, the CEO of TerraForm Labs has in a tweet responded to the report. “I think the time has come for @GenesisTrading to reveal if they provided the $1B UST shortly before the crash to SBF or Alameda – the purchase from LFG was represented as stemming from “interest to participate in The Terra Defi ecosystem” – not to provide ammo for a peg attack, the tweet noted.

The CNBC All-America Economic Survey released recently showed that only 8 percent of Americans surveyed have a positive view of cryptocurrencies now, versus 19 percent in March of 2022. Those having a negative view increased to 43 percent from 25 percent earlier. The neutral segment dropped to 18 percent, from 31 percent earlier.