Wildfires Are Intensifying. Here’s Why, and What Can Be Done. 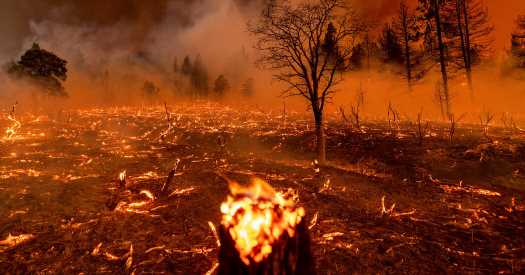 By nearly every metric, the wildfires in the Western United States are worsening. They are growing larger, spreading faster and reaching higher, scaling mountain elevations that previously were too wet and cool to have supported fires this fierce.

They are also getting more intense, killing a greater number of trees and eliminating entire patches of forest.

“Ten years ago, we weren’t really seeing fires move like that,” said Lenya Quinn-Davidson, a fire adviser for the University of California Cooperative Extension, referring to 2021’s Bootleg Fire, which began July 6 and at one point consumed more than fifty thousand acres in a single day.

Here’s what is driving these changes and what can be done about it.

Why are wildfires worsening?

Wildfires require a spark and fuel. In the United States, half of wildfires are initiated by lighting. The other half are human-caused — frequently started by power lines, cigarettes, cars, camp fires or arson.

In recent years, there’s been an abundance of very dry fuel. Drought and high heat can kill trees and dry out dead grass, pine needles, and any other material on the bottom of the forest floor that act as kindling when a fire sweeps through a forest.

Wildfire experts see the signature of climate change in the dryness, high heat and longer fire season that have made these fires more extreme. “We wouldn’t be seeing this giant ramp up in fire activity as fast as it is happening without climate change,” said Park Williams, a climate scientist at UCLA. “There’s just no way.”

These conditions have been exacerbated by fire-suppression policies. Before the modern settlement of the American West, forested land in the region burned naturally from lightning or else was intentionally burned by native communities as a form of forest maintenance. But for the past hundred years, most Western states have suppressed fires. That has led to increasingly dense forests and ample brush on the forest floors.

So what exactly is an “extreme” fire?

Al Lawson, an incident commander for the Bootleg Fire in Oregon, described its behavior as “among the most extreme you can find.” But what does that mean?

Experts think about wildfires according to metrics including intensity, rate of spread, and severity.

Fire intensity refers to its power, or the energy released from its blaze. Satellites measure the energy and temperature of fires, and research has shown that the power of these blazes has been increasing.

The rate of spread is one of the most important factors, because it suggests that a fire may be less predictable. Though the size, or acreage, of a fire is important, Ms. Quinn-Davidson said that it’s more important to watch how quickly it is moving.

Severity refers to the consequences of a fire, for instance, how many trees are killed. If a fire is tall and burning to the tops of trees and killing them, it could be more challenging to control.

How bad is breathing the smoke?

Breathing in wildfire smoke is risky.

Like air pollution, wildfire smoke — and particularly the concentration of PM 2.5, or particles smaller than 2.5 microns — can affect the respiratory and cardiovascular systems, said Colleen Reid, an environmental epidemiologist and health geographer at the University of Colorado Boulder.

For people who are healthy, the smoke can cause a sore throat, coughing, shortness of breath or decreased lung function. Those already suffering from cardiovascular or respiratory illnesses are at risk of flare-ups and should take extra precautions even when air quality is considered moderate.

Scientists are still studying the chemical composition of wildfire smoke, which depends on what’s being burned.

Trees and biomass, for instance, will produce a combination of carbon dioxide, methane, and nitrous oxides, whereas burning houses or cars could produce a whole range of compounds, including heavy metals.

Dr. Reid said a first step toward protection is to monitor the air quality where you live, using resources like this map from the Environmental Protection Agency or The New York Times’s tracker.

On days when air quality is particularly bad, stay indoors, keep windows and doors closed and use HEPA filters if possible. If you don’t have access to a HEPA filter, there’s evidence that attaching a quality filter to a box fan can be protective. Outdoors wear a form-fitting N95 mask.

What can I do to protect my home?

Between 60 to 90 percent of homes lost to wildfire are due to embers carried by wind ahead of a fire. If an ember lands on a house, or on mulch beneath a window, or enters an attic through a vent, it can ignite, setting the house on fire.

In California, homes built in the past decade in what’s called the wildland-urban interface — the areas that lie between, say, forests and towns or cities — have been required to have fire-safe features like noncombustible siding and double-sided tempered windows.

But for any home, experts say that even taking small steps, such as keeping gutters and roofs free of leaves and debris, can prove remarkably effective. As a next step, replacing things like vents with a finer mesh screen or replacing siding and roofing with more fire-resistant materials is valuable.

“We have good science that shows that homes that have been retrofitted or built in this way are more likely to survive wildfires,” said Susie Kocher, a forestry adviser with the University of California Cooperative Extension.

Landscaping changes can make a difference, too. Fire experts think in terms of the 0-5 Zone, which refers to the five-foot perimeter around a house. That zone should be kept clear of debris, firewood, plants or mulch. “It looks nice to put a shrub under our window, and that’s exactly the wrong thing,” Ms. Kocher said.

Can better policies fix this?

Experts agree that prescribed burns — intentionally set fires that periodically clear underbrush or other fuels — are a key to reducing the severity of wildfires in the future. State and federal agencies have already committed to conducting more prescribed burns.

But experts also stress that there needs to be more federal and state legislation that prioritizes this technique. There are currently bills in the U.S. Senate and the California Assembly to provide more funding and training for prescribed burns.

Another important step is taking care of the landscape to remove dead trees and other fuel. After a huge die-off in the Sierra Nevadas in the 2010s, an estimated 150 million trees fell, but only 1 percent of those trees have been removed, creating more fuel for future fires.

But a long-term solution requires major changes, experts say. Importantly, the mind-set needs to shift from fighting fires toward mitigating the risk of extreme events that are causing them to worsen. “. We’ve treated fire for so long it as if it’s something we can fight. We don’t fight hurricanes or earthquakes or floods,” said Ms. Quinn-Davidson. “We need some radical shifts in the way that we do things in order to adapt, but, yes, I think we can.”