When it comes to COVID-19, we cannot run a risk-free society

It took us 233 years, but we have managed to turn Australia back into a penal colony.

This nation is all but shut to international arrivals and its citizens cannot leave without government permission. The fiat circumscribing overseas travel is, like all things in this pandemic, inconsistently applied, subject to arbitrary mood shifts and, of course, nowhere near tough enough for some. 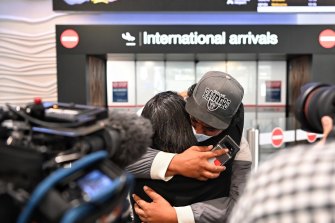 Australia’s governments have been remarkably successful at locking coronavirus out of the country and preventing its spread inside our borders. For this, they deserve credit, and some have already been richly rewarded at the ballot box.

But our safety is a chimera, a short-term fix. We have slammed the jail doors and are safe inside. Excellent. So now what?

The world is awash with COVID-19 and it will become an endemic disease that circulates forever around the globe. So, unless we intend to make our prison island permanent, we need an exit strategy. That will demand accepting risk and managing it, not building our society on the notion that COVID-19 is the only disease that Australians aren’t allowed to catch.

And what have we built in our splendid isolation?

Behind the prison walls, state governments have granted themselves insidious emergency powers allowing the imposition of draconian laws that would once have been considered unimaginable. The prevailing view of premiers on internal border closures would do an old East German cabinet proud, with Gladys Berejiklian the lone voice of moderation.

The longer extreme powers linger, the harder it will be to unwind them. Governments and the police will always find a reason to extend their control and it will always be pitched as for our own good.

And, mostly, we’re OK with it.

The true nature of the Australian character has been revealed. Far from being the hardy individualists and anti-establishment stirrers of folklore, it turns out our national symbols should be the shackle and the gag. We adore being bossed about by governments, mostly don’t complain and love dobbing on those who don’t comply. We are deeply suspicious of outsiders, even those from other states.

When this pandemic began, closure of borders and imposition of sweeping health regulations were designed to buy time to fortify the health system for the expected surge of the disease. The original position of national cabinet was that COVID-19 be suppressed but not eliminated. Now elimination is the goal and that is incompatible with reconnecting with the world. 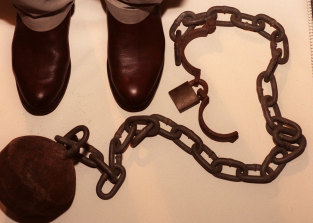 Ball and chain at Hyde Park Barracks – a penal colony once more?Credit:Steven Siewert

The one tool that everyone agrees works in eliminating the disease is lockdowns, the 21st century equivalent of ships surgery. If it was a drug, it would never be approved because its side effects include poverty, unemployment, depression, massive social dislocation, a loss of education, a transfer of risk from the old to the young and a transfer of wealth from the young to the old as future generations pick up the multibillion-dollar tab.

The hope for freedom was a vaccine. This time last year, there were serious concerns that one could not be developed for a coronavirus. Now there are several which will, at minimum, prevent most from dying or getting seriously ill.

But having secured one, AstraZeneca, which we can produce domestically, and which can protect the most vulnerable, our health gurus deemed it unsafe for those under 50. They arrived at this conclusion by measuring the vanishingly small chance of dying from blood clots against the even smaller immediate threat of death from coronavirus in a nation that had, temporarily, locked it out.

This astoundingly short-sighted decision has done immense damage to the vaccine rollout. It sent the message that AstraZeneca was not safe for anyone under 50 and sewed doubt in the minds of those over 50.

Throughout this crisis, Australia’s politicians have made a virtue of basing every decision on medical advice. They did this because it is always wise to consult experts and politically astute to have someone else to blame. But they have abdicated their primary responsibility of weighing advice, considering all consequences and managing risks.

The overprescribing of lockdowns and the dumb advice on AstraZeneca shows it is time for Australia’s politicians to step up and take responsibility for making some hard calls.

There is enough vaccine to inoculate all those most threatened by the disease by the end of the year. Once that is achieved, we should begin the process of reopening international borders and allowing our people to come and go freely with a mix of hotel and home quarantine.

That means the disease will begin to circulate here. Some people will get sick. Some people will die. Each death will be a tragedy, but we cannot run a risk-free society, and this disease, like so many, is with us forever.

Get our Coronavirus Update newsletter

Stay across the news you need to know related to the pandemic. Get it every Monday.