What will Victoria’s weather be like on Christmas Day?

It’s shaping up to be classic Christmas day weather, with temperatures ranging from pleasantly warm to swelteringly hot depending on where you are in Victoria.

The Bureau of Meteorology on Saturday released its first-look forecast for Christmas Day, with temperatures generally expected in the high 20s and 30s across the state. 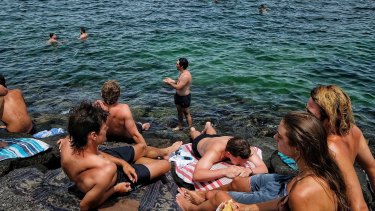 Victorians are in for a hot and relatively calm Christmas Day. Credit:Luis Ascui

Melbourne was slated to reach a maximum temperature of 29 degrees with a low of 15. Conditions were set to be partly cloudy, with a slight chance of a shower, and some light winds getting up to 30km/h in the morning.

Forecasters also expected it to be partly cloudy at Geelong and on the Surf Coast, where temperatures were expected to reach 27 degrees, and winds were forecast to get to 30km/h.

The Mornington Peninsula should reach a top of 26 degrees, with a slight chance of a shower there too, and winds topping 25km/h on Christmas morning.

Mildura was expected to swelter through a hot 39 degrees on Christmas Day, while forecasters predicted Swan Hill would not be far behind at 38 degrees. Shepparton was expected to see tops of 36 degrees, while Albury-Wodonga and Bendigo were set to both reach 35.

The bureau will keep updating the forecast as it gets closer to Christmas Day, but meteorologist Miriam Bradbury said the initial outlook offered “a really good early indication of what to expect”.

“It looks at this point like a fairly settled night.”

Ms Bradbury also warned Victorians to keep an eye on the weather into Saturday evening.

The bureau issued a severe thunderstorm warning for damaging winds and large hailstones on Saturday afternoon, with the state’s northeast and the east, west, and south Gippsland districts likely to be affected.

“We do expect to see that thunderstorm activity ease later [on Saturday] evening going into the overnight period,” Ms Bradbury said.

“But [Sunday] does look like a pretty unstable as well … we’re expecting to see thunderstorm activity possible pretty much anywhere across the state, but more likely across those eastern parts once again.”

A severe weather warning for damaging winds was also in place for parts of the central, north central, northeast, and east, west and south Gippsland districts for Sunday.

A total fire ban was also in place for the Mallee and Wimmera regions on Sunday. Vic Emergency sent out a number of alerts about grass fires across the state on Saturday, including at Terrappee in the northwest, and Katunga in the Goulburn Valley.

Authorities also remained on high alert about the risk of thunderstorm asthma, with much of the state falling under an either “severe” or “moderate” risk category on Saturday.

Essentially, the entire state was expected to be affected on Sunday, with the east at severe risk and the rest of Victoria, at moderate risk.