WA’s first purpose-built quarantine hub is expected to open by the end of March after the federal and state governments signed off on an agreement to build the 1000-bed facility on Wednesday.

The centre will be built on vacant land at Jandakot Airport in Perth’s south at an estimated cost of $400 million. 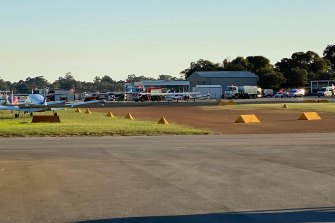 The Commonwealth will fund the build with the state government to pick up the tab for its ongoing operational costs.

Federal Finance Minister Simon Birmingham said the WA site would be used for future emergencies or disasters, as well as continued management of the COVID-19 pandemic.

“The project will also create jobs in the state, support economic recovery and provide an enduring asset to enhance the state’s medium and long-term capability to respond to future natural disasters or future health crises in the years to come,” he said.

The first 500 beds at the facility are expected to open by April 2022 with similar facilities being planned for Victoria and Queensland.

The federal government has begun construction at its 1000-bed Melbourne facility, due to open by the end of the year. A proposed 1500-bed facility on defence land in Brisbane could be up and running at a similar time to Perth’s hub.

Under Australia’s COVID-exit roadmap, the number of people arriving from overseas will increase once the country reaches 70 per cent vaccination rates in people aged 16 and above.

Once 80 per cent vaccination is achieved – projected to be around December – caps on returning vaccinated Australians will be abolished and caps on student, economic and humanitarian visas will be increased.

A gradual reopening of inward and outward international travel will also resume with safe countries with quarantine requirements.

International borders will reopen in the final stage of the four-phase national plan, with quarantine to remain in place for high-risk travellers to minimise cases within the community.