The Walt Disney World Resort is adding two 75-megawatt solar arrays to its renewable energy portfolio that, combined with existing infrastructure, will provide 40% of the park’s electricity.

The announcement comes at a time when energy prices across the country, coupled with record-high inflation, are soaring and climate change is pressuring consumers to reduce emissions.

“This latest step will help us further accomplish our goal of net zero emissions by 2030,” Jeff Vahle, president of the Walt Disney World Resort, told ABC News. “Our commitment to the environment goes beyond imagining a brighter, more sustainable future by putting possibility into practice to ensure a happier, healthier planet for all.”

The Walt Disney World Resort currently has two solar arrays, including one shaped like a giant Mickey, that generate a total of 55-megawatts of solar power and provide 10% of the park’s energy.

MORE: Extraordinary Earth: Ways to protect the environment from home

The two new solar installations won’t be located on park property; they will be built in Gilchrist and Polk Counties, covering more than 1,000 acres. Both are expected to come online by early 2023. By placing the solar facilities elsewhere in Florida, the Walt Disney World Resort will not need to rely on sunny skies in one area for reliable solar energy. The addition will also make Disney World the largest commercial consumer of solar in the state of Florida. 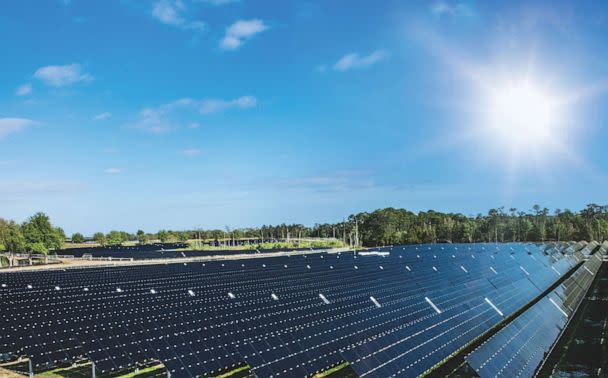 The two new solar arrays will be capable of producing more than 375,000 megawatt hours of energy in its first year, which is the equivalent of removing 29,500 vehicles from the road annually.

The Walt Disney Co. is the parent company of ABC News and "Good Morning America."

Walt Disney World Resort to be powered up to 40% by the sun originally appeared on goodmorningamerica.com