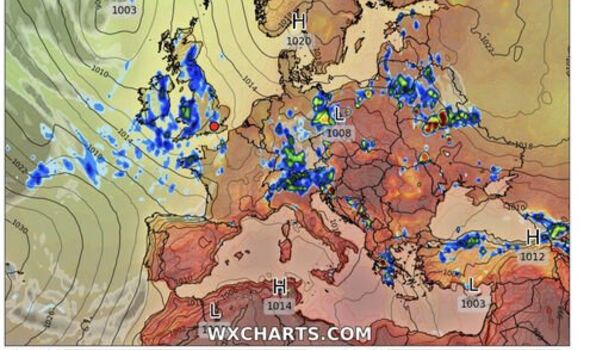 The giant area of low pressure, already the culprit of thundery downpours this week, will split spawning two mini-cyclones.

This pair of spinning storm cells will straddle the UK kickstarting an onslaught of torrential rain and winds as warnings are raised for flash floods and weather damage.

Warm, moist air from the Atlantic will rise over Britain building atmospheric instability and threatening tornado activity in parts.

Jim Dale, meteorologist for British Weather Services, said: “The low-pressure system which has already brought some eruptions of thunder this week will break into two separate systems with one moving to the north and the other to the south of the UK.”

“This will bring some very volatile weather conditions through the week with the risk of thunder, lightning and even the risk of tornado activity.”

“This level of instability can lead to flash flooding, and while winds won’t be the main issue, with the threat of tornadoes in parts of the country, it won’t come as a surprise to see some damage from the weather by the end of the week.” 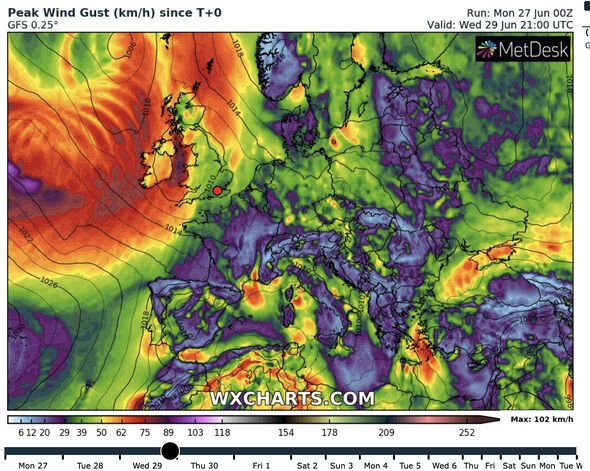 Britain’s weather will be put through the washing machine until the weekend when low pressure will weaken allowing high pressure to re-establish.

Mr Dale, an expert in weather impacts and safety, said: “Warmth and humidity will cause air to rise higher into the atmosphere, and that leads to large cumulous clouds which sets up the right conditions for thunder, lightning and tornado activity.

“It leads to an unstable atmosphere of the kind we expect this week which will bring some initial dramatic weather events before turning calmer.”

Soaring temperatures over the past couple of weeks will fall through the coming days settling closer to average.

Southern Britain may see highs of 25C while Scotland and the north will hover in the mid-teens dropping to single figures overnight.

Wind and rain will lash north-western regions in the run-up to mid-week while the southeast dodges the downpours, according to the Met Office.

Showers will continue largely in the west until the weekend as the north braces for the threat of strong winds. 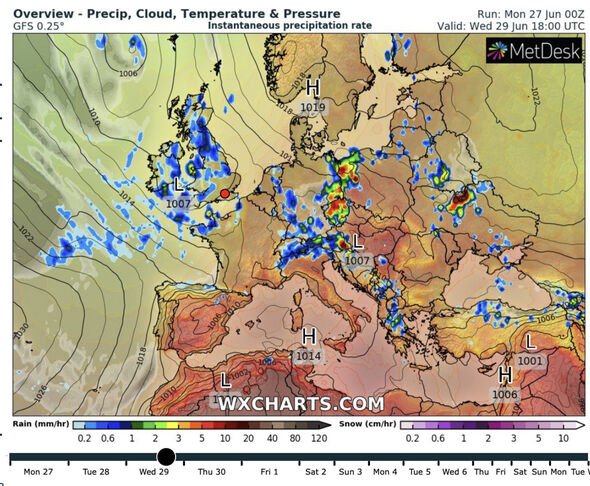 Britain’s weather will this week fall to the control of low-pressure–known to meteorologists as cyclonic weather patterns.

Met Office meteorologist Alex Deakin said: “The week will be dominated by low pressure to the west which means there will be showers.”

“These will be focussed on the west with the driest weather to the east.”

“But where the sun is out it will feel pretty warm because those winds are not bringing cold air with them, but the highest temperatures are more likely in the east.”

“There is the risk of thunderstorms on Thursday.”

Weathertrending’s John Hammond said: “For much of the week ahead, low-pressure area will ensure a showery outlook.”

“Furthest from the low pressure’s centre, some eastern areas of the country look set to see the best of some lengthier drier, brighter spells, especially early in the week.”