Wendy Evans was lucky enough to visit her mother’s nursing home on Boxing Day, just before it was locked down due a positive coronavirus case.

But when it opens again to visitors this week, the Melbourne mother will feel slightly uneasy going into the facility because she hasn’t been able to find a rapid antigen test anywhere. 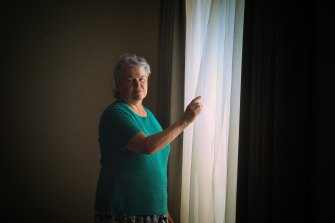 Wendy Evans hasn’t been able to find a rapid antigen test before visiting her mother in a Melbourne nursing home. Credit:Luis Enrique Ascui

While it’s not a strict requirement, it’s been strongly recommended by the aged care facility for visitors, and it’s something Ms Evans would like to do before seeing her 95-year-old mother, Dorothy.

“I’m feeling very frustrated, very angry,” she said on Wednesday. “Give us free RATs and let’s get on with it.”

After two years of upheaval in Australia’s aged care sector, with facilities going in and out of lockdown and several suffering deadly outbreaks and staffing issues, the recent surge in demand for rapid antigen tests has been an added stress for those trying to visit loved ones.

The federal government announced at the end of December that it would provide rapid antigen test kits to residential aged care facilities to support the testing of staff and for regular visitors. The first deliveries to facilities started several days ago.

In the meantime, rapid antigen tests have been hard to find at pharmacies and supermarkets, with widespread shortages placing pressure on the federal government to make the tests freely available to everyone.

Prime Minister Scott Morrison announced on Wednesday about 6.6 million Australians would be eligible for 10 free rapid antigen tests over three months to be collected from pharmacies, besides the free tests also available at testing clinics if they had symptoms or were deemed close contacts.

But rapid tests will not be universally free in Australia.

Visitor arrangements in aged care facilities must comply with state and territory directions, and guidance from both the NSW and Victorian health departments advises residential aged care operators should consider screening visitors on entry via rapid antigen testing.

An industry code for visiting residential aged care homes during the pandemic, developed and endorsed by peak organisations for aged care providers, consumers and carers, says regardless of an outbreak status, residents should always be allowed at least one “essential” visitor. 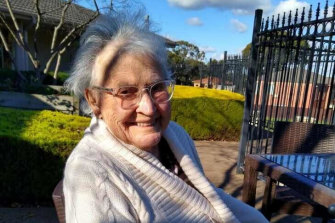 Ian Yates, the chief executive of the Council on the Ageing, said most providers would require those essential visitors to be fully vaccinated, and many would like them to have a rapid antigen test as added protection.

“So the unavailability of RATs, or easily accessible PCR tests, has proved a problem in terms of the provider wanting it for infection-control purposes but it not being available. So getting them out to aged care I think is a priority … for the protection of residents, it’s really important those RATs are in good supply and they should be free,” he said.

While Ms Evans praised the staff at the aged care facility where her mother lives in Melbourne’s north, she said Dorothy, who had dementia, had deteriorated in the past two years as their visits became sporadic due to changing COVID-19 restrictions.

“It’s been really stressful,” she said. “And I suppose the frustration with the rapid tests is I’m more than happy to have one, but I just think it’s ridiculous that we get expected to buy them.”

Ms Evans and her husband normally visit several times a week, making it financially unsustainable to test each time in the long term.

“It’s made me really angry,” she said. “It’s made me angry that rapid tests have been discussed for a long time … we’ve done all the right things. Mum’s 95 and she is not going to live much longer.”

Lisa Cohen’s mother, who also has dementia, is in a nursing home on Sydney’s north shore. She praised the facility, but said it had been a gruelling two years for residents of the home.

“The home Mum is in is beautiful, and they really look after them and they have lovely people but this has just been so heartbreaking to watch these people missing out on visits from their family.”

Ms Cohen said the home was in lockdown because of a staff member infection, but when it opened, visitors would be required to show a negative rapid test result to be allowed in.

While her sister was able to find some rapid tests on Tuesday, Ms Cohen said it wasn’t sustainable to be buying them in the long term if they wanted to visit their mother several times a week.

“I’ll do it because I want to see her but what about people who can’t? It’s a lot of money,” she said.

”There is this one particular fellow who goes and visits his wife every day and you see him sitting in the garden with her. He catches the bus, so he doesn’t drive. How’s he supposed to get hold of these RATs? And the cost — if you’re on a pension, you can’t afford to do that. So that would be really distressing.”

The federal government announced at the end of last year it would provide access to rapid antigen test kits to Commonwealth-subsidised residential aged care facilities to support the testing of regular visitors when they arrived.

Deliveries commenced for NSW on New Year’s Eve, for Victoria on Monday, and Queensland from Tuesday, according to a COVID-19 update published by the Department of Health this week.

The federal Department of Health has been contacted for comment.

Aged care provider Arcare, which operates facilities in NSW, Victoria and Queensland, said not all their sites had received their rapid tests from the federal government on time, with some states seeing a backlog of a week. The supply only lasted a few days, and restocking had not been easy, a spokeswoman said.

“In Queensland, it’s impossible but in other states some (not all) sites could purchase from the local chemist if available.”