Antonio Guterres warned there was still more to do to ensure full access to food – despite last month’s UN-brokered export deal. 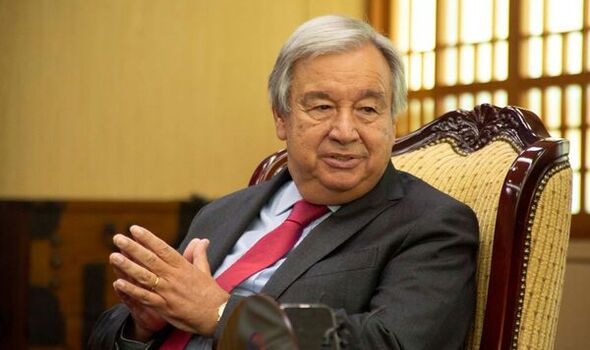 Speaking in the Ukraine port Odesa yesterday, he said: “This is an agreement between two parties locked in bitter conflict.

“It is unprecedented in scope and scale. But there is still a long way to go on many fronts.”

At the end of July, the UN and Turkey brokered a deal clearing the way for Ukraine to export 22 million tons of corn and other grain stuck in three of its Black Sea ports since the invasion.

The blockage has driven up prices and heightened fears of famine, especially in Africa.

A further 10 cargo ships are now loaded with grain to be shipped, Ukraine’s Infrastructure

Minister Oleksandr Kubrakov said – adding: “[They will] leave Odesa, Chornomorsk and Pivdennyi. We also have more than 40 applications for shipping to Ukrainian ports.”

He said 25 ships had already been dispatched holding 630,000 tons of agricultural products.

Mr Guterres stressed during discussions that any damage to Europe’s biggest nuclear plant, Zaporizhzhia, in southern Ukraine – occupied now by Russia – would be “suicide”.

Mr Erdogan added that he will soon discuss the looming risk of “another Chernobyl” with Putin.