The wives of two of the last remaining Ukrainian fighters holed up in Mariupol’s steelworks have tearfully pleaded with Pope Francis to help rescue their husbands.

Kateryna Prokopenko, 27, and Yuliya Fedosiuk, 29, told the Catholic leader he was their ‘last hope’, begging him: ‘Please don’t let them die.’

Denis Prokopenko is Lieutenant Colonel in the National Guard of Ukraine and a commander in the Azov Regiment, while Arseniy Fedosiuk is an Azov sergeant.

Their wives spoke to the Pope for five minutes at the end of his general audience in St. Peter’s Square today.

They also asked him to intervene directly with Vladimir Putin to let them go because ‘Russian captivity is not an option’.

‘You are our last hope, I hope you can save their lives, please don’t let them die,’ Prokopenko could be heard telling the pope on a video released by the Vatican. 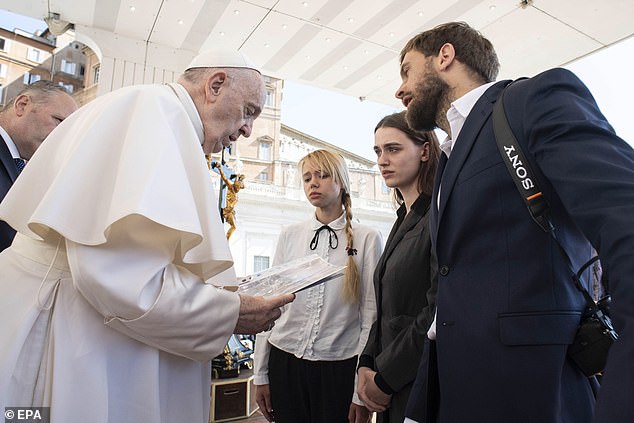 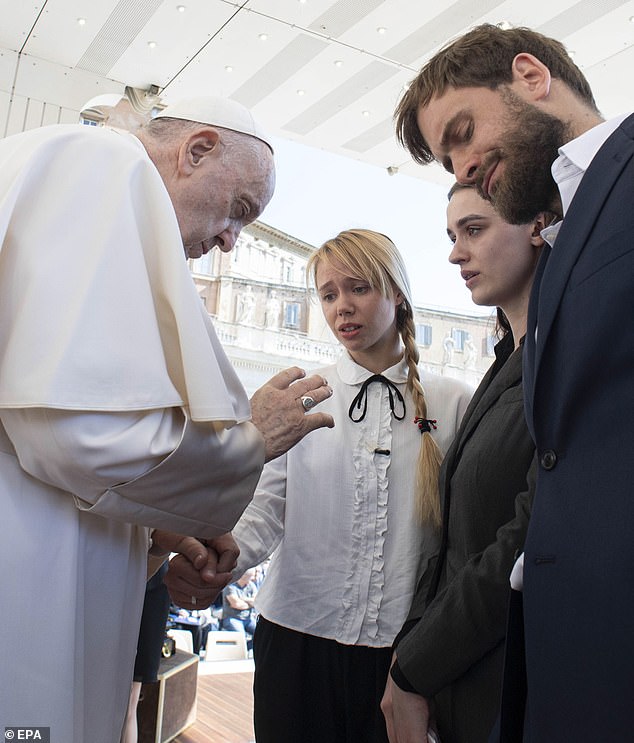 The women told reporters afterwards that they described to the pope scenes of injured soldiers, rotting flesh, unburied bodies and lack of food, water and medicine at the steelworks.

They said they last spoke to their husbands on Tuesday.

‘Our soldiers are waiting to be evacuated to a third country, to lay down their arms in case of evacuation,’ Fedosiuk said.

‘They will not go to Russian captivity because they will be tortured and killed,’ Fedusiuk told Francis, according to a video of the encounter shot by another member of their entourage, Pyotr Verzilov, a prominent member of the Russian protest group Pussy Riot who is working on a documentary about Ukraine.

The pope said he would do everything possible and would pray for them. 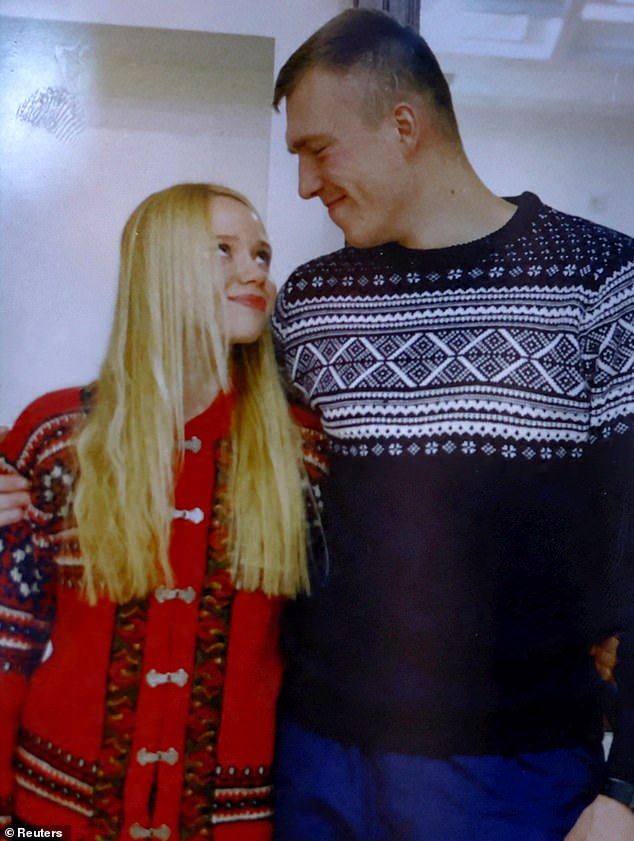 Prokopenko’s husband, Denis Prokopenko, is the commander of the Azov Regiment in the Azovstal mill (pictured before the war) 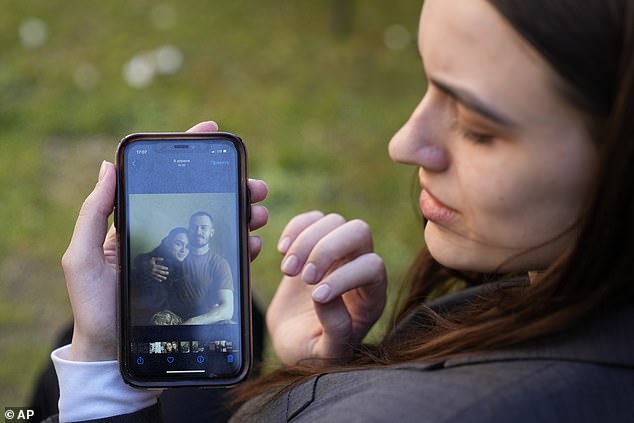 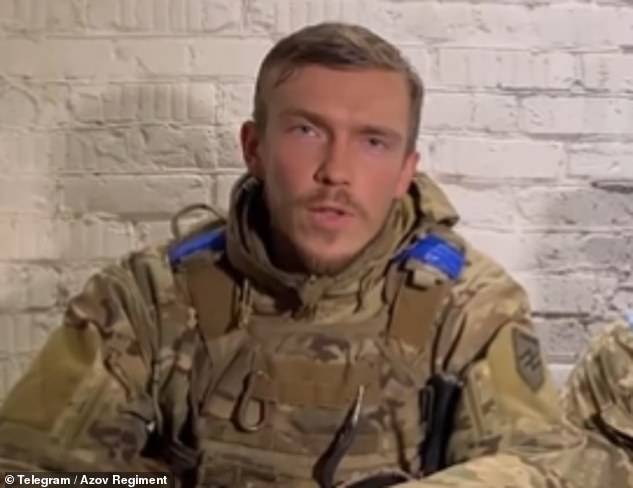 Fedosiuk said they asked him to come to Ukraine and to talk to Putin and tell him to ‘let them go’.

The women mentioned Switzerland and Turkey as possibilities but gave no details.

The pair have been in Italy for over two weeks seeking to rally international support for a diplomatic resolution to the standoff at the plant.

Francis, who has been hobbled by knee trouble that makes walking and standing painful, stood up to greet the women, a gesture he didn’t extend to others who lined up to see him Wednesday at the end of the audience.

He held their hands as they wept, blessed them and said he had spoken about the plight of the soldiers with Cardinal Konrad Krajewski, whom he has dispatched to Ukraine.

Verzilov told Francis that time was running out for the troops in the Azovstal mill.

‘We feel that if some emergency intervention does not happen in the next few days it will end in a big tragedy,’ Verzilov told The Associated Press afterward. He said Francis said he was aware of the standoff. ‘He understands how tragic it is and will do what he can.’

Scores of civilians have been evacuated from the steelworks in recent days, but an aide to Mariupol’s mayor, Petro Andryushchenko, said at least 100 still remained inside.

Francis said in an interview published on May 3 that he asked for a meeting in Moscow with Putin to try to stop the war in Ukraine but had not received a reply.

Fedosiuk called for countries to form a ‘a strong diplomatic coalition to push Putin to let them go safely to a third country’.

Fedosiuk added that the last time she spoke to her husband, he asked her to find a article on the internet about how to live without water for the longest possible time. 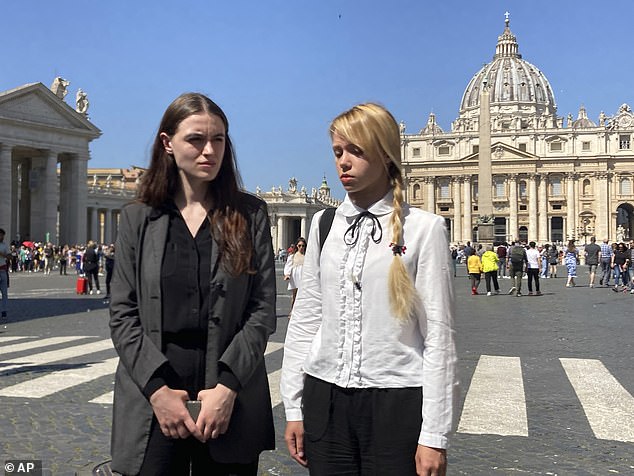 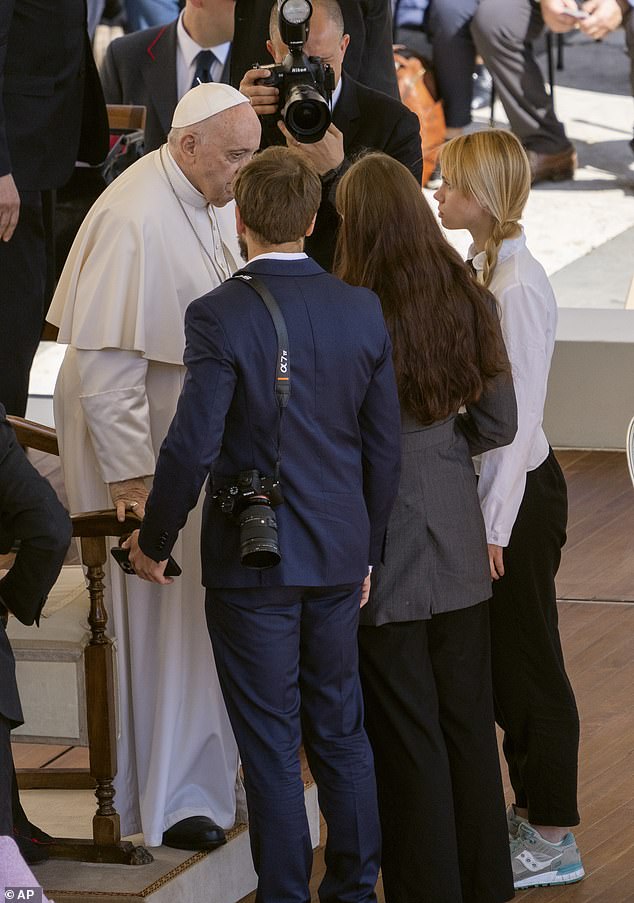 The wives spoke to the Pope for five minutes at the end of his general audience in St. Peter’s Square today 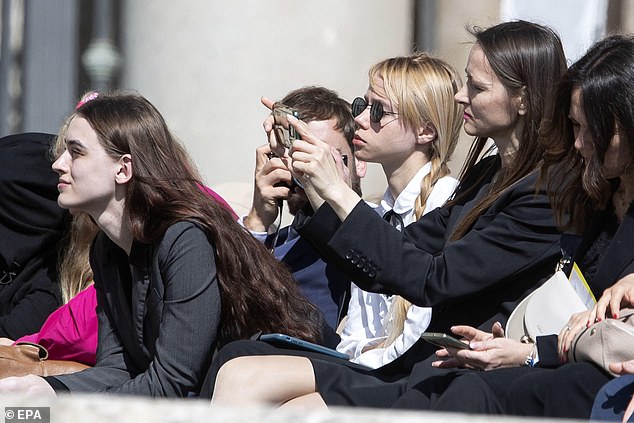 The Azov Regiment said in a social media post on Tuesday that in the past 24 hours, 34 Russian aircraft had flown over the plant including eight sorties by strategic bombers.

It said the plant had come under fire from the Russian navy and from tanks, artillery and rockets. Reuters was unable to verify the situation.

Azovstal is a four-square-mile industrial complex at the heart of Mariupol where the city’s final Ukrainian defenders are holed up.

It is built on top of a nuclear-proof network of tunnels which fighters are using as a base to repel Russian forces that surrounded the complex more than two weeks ago.

Hundreds of civilians had also fled there for safety during the siege of the wider city, and ended up trapped alongside the troops as Russia attacked.

After days of appeals to get them out, a final evacuation took place on Saturday when around 300 were rescued by Red Cross and UN workers. 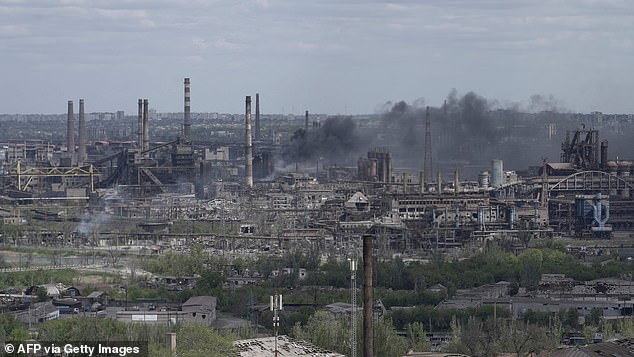 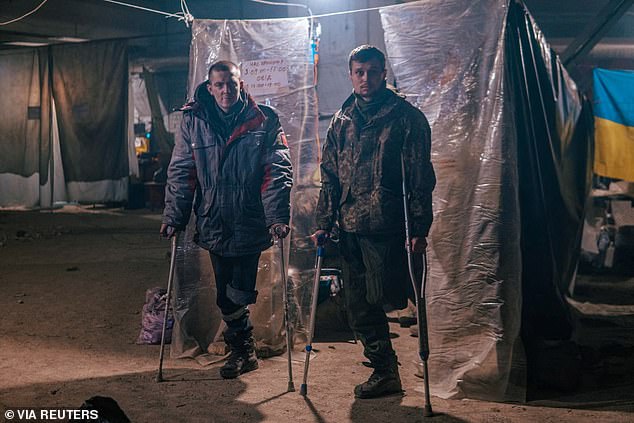 President Volodymyr Zelensky said late Saturday that all civilians, children and elderly were now out of Azovstal and he was working on evacuating the wounded and medics as well as opening humanitarian corridors in the wider city.

Fighting has since resumed in the wake of the evacuation, with fierce battles reported Monday along a bridge that was used to evacuate the civilians just two days beforehand. Ukraine said it repelled the attack.

Captain Svyatoslav Palamar, deputy commander of the Azov battalion, said late Monday wounded soldiers are inside the plant and called for them to be given safe passage out.

Russian commanders are said to be desperate to capture Azovstal because it would given them full control over Mariupol – a key port city that has been besieged since the early days of the war.

British intelligence also believes commanders want to take out Azovstal so they can move troops further north, to join the battle for Donbas. 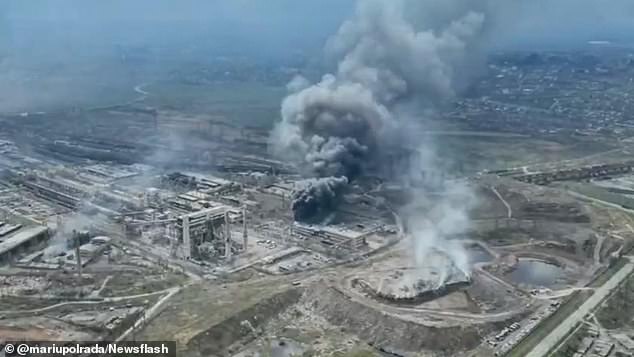 Russia has been making slow gains in the region in recent weeks, but has yet to achieve a major breakthrough of Ukrainian lines.

A sister plant of the Azovstal mill in the southern city of Zaporizhzhia has highlighted how the Mariupol facility has proven key to the Ukrainian resistance to the numerically superior Russian force.

‘We can stay in the shelters for a long time,’ said Zaporizhstal employee Ihor Buhlayev, 20, in his hooded silver safety gear as molten metal flowed and sparked behind him. ‘I think it will give us the chance to survive.’

One other rallying point for Ukrainians has become the Eurovision song contest, the world’s biggest live music event which takes place this weekend.

Ukraine’s rap folk band Kalush Orchestra is the favourite to win the camp celebration, and they progressed through Tuesday night’s semi-final to ensure they participate in Saturday’s grand final.