Ukrainian forces retake areas near Kyiv amid fear of traps

Ukrainian troops moved cautiously to retake territory north of the country’s capital on Saturday, using cables to pull the bodies of civilians off the streets in one town out of fear that Russian forces might have booby-trapped them before leaving.

Ukrainian President Volodymyr Zelenskyy warned in his nightly video address hours earlier that departing Russian troops were creating a “catastrophic” situation for civilians by leaving mines around homes, abandoned equipment and “even the bodies of those killed.” His claims could not be independently verified.

Associated Press journalists in Bucha, a suburb northwest of Kyiv, watched Saturday as Ukrainian soldiers backed by a column of tanks and other armored vehicles used cables to drag bodies off of a street from a distance, fearing they might have been rigged to explode. Locals said the dead — the AP counted at least six — were civilians who were killed by departing Russian soldiers without provocation.

“Those people were just walking, and they shot them without any reason. Bang,” said a Bucha resident who declined to give his name citing safety reasons. “In the next neighborhood, Stekolka, it was even worse. They would shoot without asking any question.”

Ukraine and its Western allies reported mounting evidence of Russia withdrawing its forces from around Kyiv and building its troop strength in eastern Ukraine.

The visible shift did not mean the country faced a reprieve from more than five weeks of war or that the more than 4 million refugees who have fled Ukraine will return soon. Zelenskyy said he expects departed towns to endure missile strikes and rocket strikes from afar and for the battle in the east to be intense.

“It’s still not possible to return to normal life, as it used to be, even at the territories that we are taking back after the fighting,” the president said. Moscow’s focus on eastern Ukraine also kept the besieged southeastern city of Mariupol in the crosshairs. The port city on the Sea of Azov is located in the mostly Russian-speaking Donbas region, where Russia-backed separatists have fought Ukrainian troops for eight years. Military analysts think Russian President Vladimir Putin is determined to capture the region after his forces failed to secure Kyiv and other major cities.

The International Committee of the Red Cross planned to try Saturday to get into Mariupol to evacuate residents after canceling the operation Friday when it did not receive assurances the route was safe. City authorities said the Russians blocked access to the city. There was no word as of late Saturday whether the Red Cross managed to reach Mariupol.

An adviser to Zelenskyy, Oleksiy Arestovych, said in an interview with Russian lawyer and activist Mark Feygin that Russia and Ukraine had reached an agreement to allow 45 buses to drive to Mariupol to evacuate residents “in coming days.”

The Mariupol city council said earlier Saturday that 10 empty buses were headed to Berdyansk, a city 84 kilometers (52.2 miles) west of Mariupol, to pick up people who managed to get there on their own. About 2,000 made it out of Mariupol on Friday, some on buses and some in their own vehicles, city officials said. 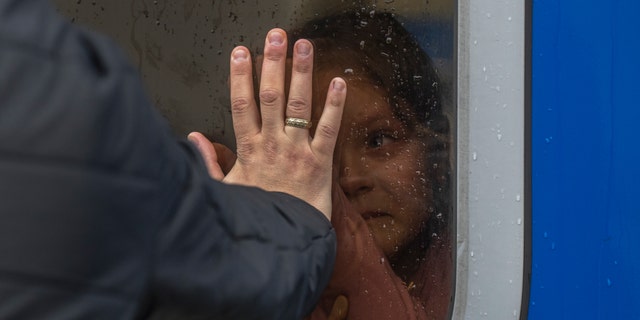 A girl inside a train reacts as she says goodbye to relatives at the train station in Odesa, before she and members of her family escape the war in Ukraine to Poland, on Saturday, April 2, 2022.
(AP Photo/Petros Giannakouris) 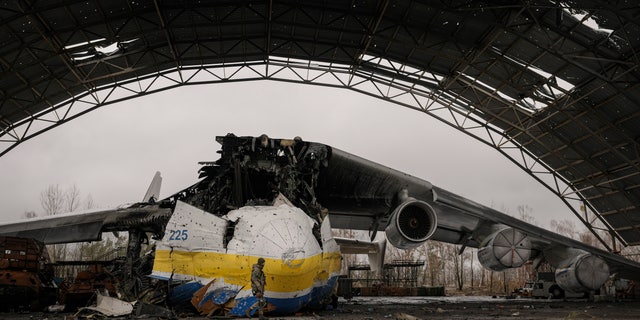 A Ukrainian serviceman walks by an Antonov An-225 Mriya aircraft destroyed during fighting between Russian and Ukrainian forces on the Antonov airport in Hostomel, Ukraine, Saturday, April 2, 2022.
(AP Photo/Vadim Ghirda)

Among those escaping the city was Tamila Mazurenko, who said she fled Mariupol on Monday, made it to Berdyansk that night then took a bus to Zaporizhzhia. Mazurenko said she waited for a bus until Friday, spending one night sleeping in a field.

“I have only one question: Why?” she said of her city’s ordeal. “We only lived as normal people. And our normal life was destroyed. And we lost everything. I don’t have any job, I can’t find my son.”

Mariupol, which has been surrounded by Russian forces for more than a month, has suffered some of the war’s worst attacks, including on a maternity hospital and a theater that was sheltering civilians. Around 100,000 people are believed to remain in the city, down from a prewar population of 430,000, and they are facing dire shortages of water, food, fuel and medicine.

The city’s capture would give Moscow an unbroken land bridge from Russia to Crimea, which it seized from Ukraine in 2014. But its resistance has also has taken on symbolic significance during Russia’s invasion, said Volodymyr Fesenko, head of the Ukrainian think-tank Penta.

“Mariupol has become a symbol of Ukrainian resistance, and without its conquest, Putin cannot sit down at the negotiating table,” Fesenko said.

About 500 refugees from eastern Ukraine, including 99 children and 12 people with disabilities, arrived in the Russian city of Kazan by train overnight. Asked if he saw a chance to return home, Mariupol resident Artur Kirillov answered, “That’s unlikely, there is no city anymore.” 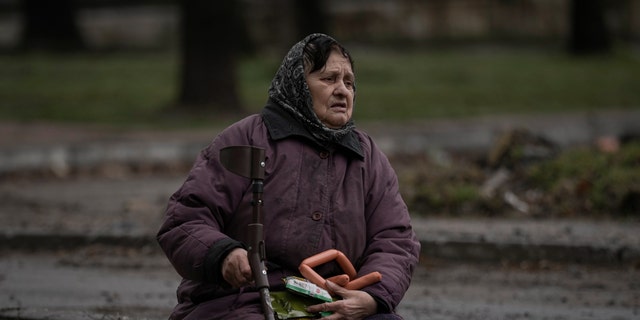 A woman holds food items she received after a convoy of military and aid vehicles arrived in the formerly Russian-occupied Kyiv suburb of Bucha, Ukraine, Saturday, April 2, 2022.
(AP Photo/Vadim Ghirda)

In towns and cities surrounding Kyiv, signs of fierce fighting were everywhere in the wake of the Russian redeployment. Destroyed armored vehicles from both armies are left in streets and fields along with scattered military gear.

Ukrainian troops were stationed at the entrance to Antonov Airport in suburb of Hostomel, demonstrating control of the runway that Russia tried to storm in the first days of the war.

Inside the compound, the Mriya, one of the biggest planes ever built, lay wrecked underneath a hangar pock-marked with holes from the February Russian attack.

“The Russians couldn’t make one like it so they destroyed it,” said Oleksandr Merkushev, mayor of the Kyiv suburb of Irpin.

Irpin has seen some of the fiercest battles of the war, and Merkushev said the Russian troops “left behind them many bodies, many destroyed buildings and they mined many places.”

A prominent Ukrainian photojournalist who went missing last month in a combat zone near the capital was found dead Friday in the Huta Mezhyhirska village north of Kyiv, the country’s prosecutor general’s office announced. Maks Levin, 40, worked as a photojournalist and videographer for many Ukrainian and international publications. 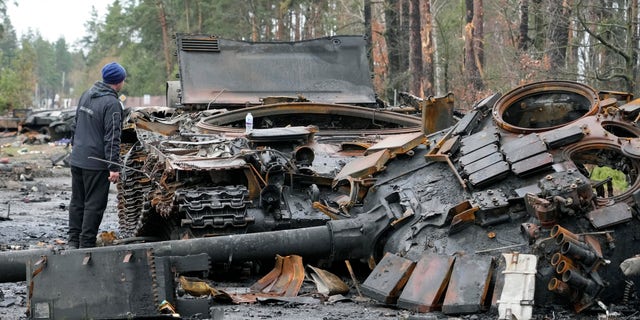 The prosecutor general’s office attributed his death to two gunshots allegedly fired by the Russian military, and it said an investigation was underway.

Elsewhere, at least three Russian ballistic missiles were fired late Friday at the Odesa region on the Black Sea, regional leader Maksim Marchenko said. The Ukrainian military said the Iskander missiles did not hit the critical infrastructure they targeted in Odesa, Ukraine’s largest port and the headquarters of its navy.

Ukraine’s state nuclear agency reported a series of blasts Saturday that injured four people in Enerhodar, a city in southeastern Ukraine that has been under Russian control since early March along with the nearby Zaporizhzhia Nuclear Power Plant. Ukraine’s human rights ombudsman said on Telegram that the four were badly burned when Russian troops fired light and noise grenades and mortars at a pro-Ukraine demonstration.

The head of Ukraine’s delegation in talks with Russia said Moscow’s negotiators informally agreed to most of a draft proposal discussed during face-to-face talks in Istanbul this week, but no written confirmation has been provided. However, Davyd Arakhamia said on Ukrainian TV that he hopes that draft is developed enough so that the two countries’ presidents can meet to discuss it.

On Friday, the Kremlin accused Ukraine of launching a helicopter attack on a fuel depot on Russian soil.

Ukraine denied responsibility for the fiery blast at the civilian oil storage facility on the outskirts of the city of Belgorod, about 25 kilometers (16 miles) from the Ukraine border. If Moscow’s claim is confirmed, it would be the war’s first known attack in which Ukrainian aircraft penetrated Russian airspace.