BBC Weather: UK temperatures to climb over the weekend

Brian Gaze from Weather Outlook predicted south east England, including London, will bask in glorious highs of at least 21C over a period of 11 days between Bank Holiday Monday, which falls on June 31, and Thursday, June 10. He also said southern areas could even see highs of 27C during the first part of June as high pressure from continental Europe looks likely to arrive. Mr Gaze told Express.co.uk: “The probability of 21C being reached in London or south east England on each of the days between June 31 to 10 is greater than 50 percent.

“Therefore, it would be a big change in the weather after what we have had to contend with in recent weeks!

“Unfortunately, there is a greater chance of things remaining more changeable and cooler the further north west in the UK you head.

“At the moment I think it is unlikely that we will see 30C being hit during the first third of June, but 27C in the southern half of the UK would not surprise me.

“Given the long run of low temperatures that would certainly feel hot to many people. 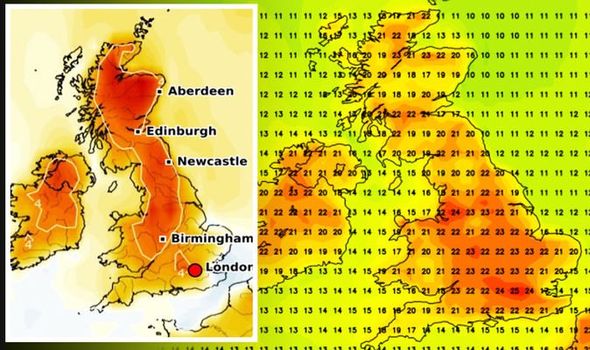 “The source of the warmth depends on where high pressure becomes centred, but either from continental Europe or the southwest.”

Despite Mr Gaze’s warning of north west regions being cooler during the first part of June, the latest maps from Netweather show temperatures still soaring to 22C in Liverpool and Manchester on Tuesday, June 1.

Birmingham and Bristol in the west could also see highs of 22C on the same day.

Terry Scholey, a forecaster at Netweather, also expected May to end on a “much warmer note” following a wet and windy month. 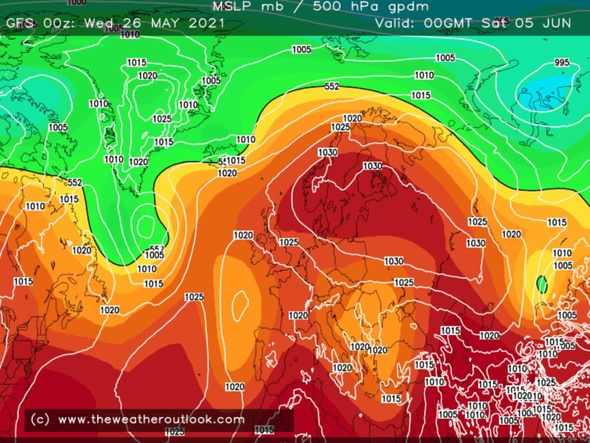 He added temperatures could even climb to 20C in the south as early as tomorrow as high pressure starts to dominate.

“The very cool, wet May has already been well documented, but it looks as though the end of the month, which comprises the late spring bank holiday, will end on a finer, drier, much warmer note.

“It’ll take a few days, though, for temperatures to recover, and cloud amounts will vary for a time, but the change will be welcomed by farmers and growers who were ‘screaming’ for rain only just a month ago. 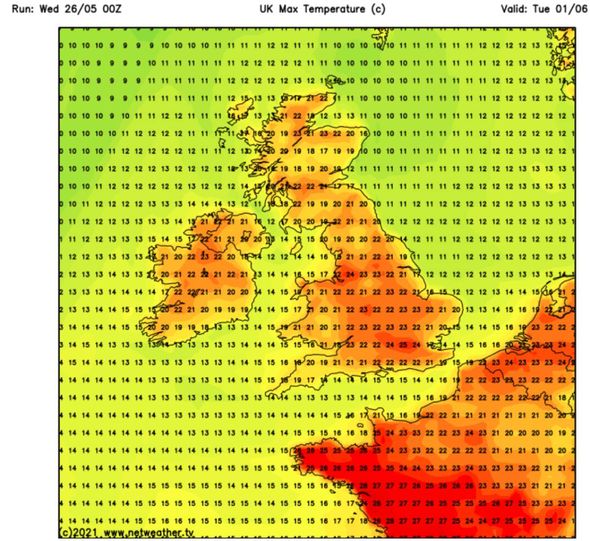 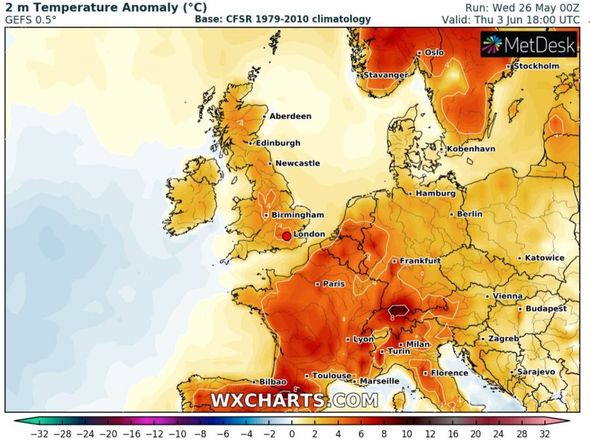 “A steady rise in pressure brings an improvement by Thursday to finer, drier weather as we approach the bank holiday.

“The very low cloud and mist across some northern and eastern areas will lift and clear through the morning, leaving most parts with warm sunny spells in mostly light breezes.

“As a result, temperatures respond reaching 19 or 20C where you see the best of the sunshine in the South, but 15 to 18C more generally, although some North Sea coasts may struggle to get above a chilly 12 or 13C.”

The Met Office’s long-range forecast between Sunday, May 30, and Tuesday, June 8, added the hot weather could be disrupted by brief spells of rain, but overall temperatures will be “above average”. 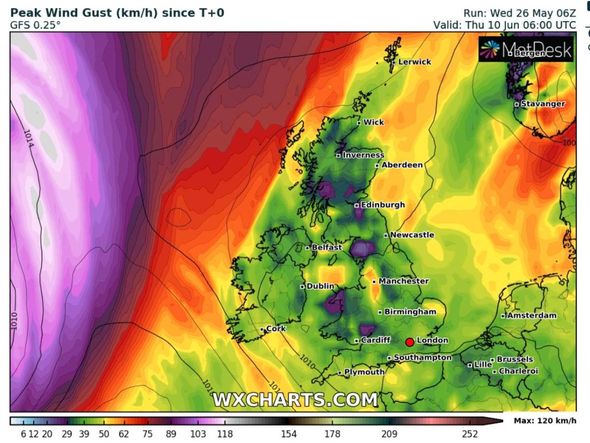 The forecast said: “High pressure will initially be dominant over the UK, with many areas experiencing warm, dry and sunny weather on Sunday and Monday.

“However, outbreaks of rain are signalled to gradually move in from the northwest on Monday, marking a change to more unsettled conditions.

“There will be some drier and brighter intervals but in general temperatures will be slightly below average during this unsettled period.

“By the end of the period, more settled conditions are expected to return and temperatures should recover to back average.”