Surviving victims of the Tasmanian jumping castle tragedy face ‘very slow and long recoveries’ after suffering many injuries, including blunt for trauma and multiple broken bones.

Two children are still fighting for life in hospital after falling 10 metres from a jumping castle blown into the air by a freak gust of wind during an end-of-year celebration at Hillcrest Primary School, in Devonport.

Doctors have been working around the clock to keep the pair alive since the tragedy on Thursday, which claimed the lives of six of their classmates.

Both remain in critical but stable conditions as they recover from blunt force trauma, multiple broken bones, and internal injuries.

‘The list of injuries on these kids is a mile long,’ a well-placed source told the Herald Sun. ‘They face a very long and slow recovery.’ 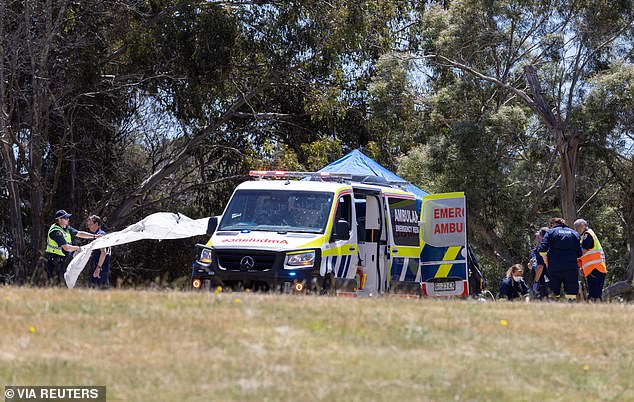 Two children are still fighting for life after falling from an airborne jumping castle at Hillcrest Primary School, in Devonport, last Thursday. Emergency services workers are pictured at the scene on the tragedy

On Monday, their classmate Beau Medcraft, who narrowly escaped death after being thrown off the airborne inflatable, returned to the scene of the horror incident for the first time to pay respect to his peers.

The 12-year-old laid gaming controllers as a tribute for his dead friends at the growing memorial outside the school’s front gates.

With both arms in casts and his shoulder in a sling, Beau placed four Xbox controllers among the sea of flowers and cards left by families and members of the local community.

He then broke down as he hugged his parents, who embraced the young boy at the tribute.

Beau, along with 39 other witnesses, will be interviewed by Tasmania police and specialist child interviewers from NSW as part of Coronial investigations into the tragedy. 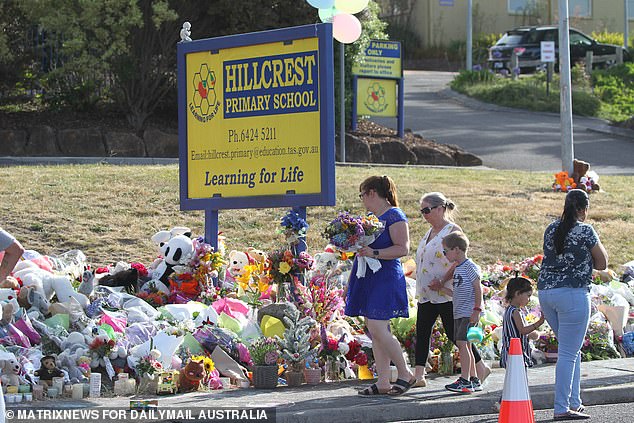 A source says the two surviving victims suffered a long list of injuries and face a ‘very slow’ recovery. Pictured: Visitors leave flowers, toys and stuffed animals at a memorial out the front of the school on Friday

He was among a stream of mourners who visited the site on Monday to honour the six primary school graduates who were due to start high school next year.

A representative of Tasmanian Governor Barbara Baker left a card alongside the floral tributes, reading: ‘I join with the Tasmanian community in feelings of great sorrow of the tragedy that has happened at Hillcrest Primary School’.

‘Addison had such a great life ahead of her but that has been taken away,’ grandfather Mr Deacon said.

‘We are just so proud of her. She is a beautiful granddaughter, we have looked after her since she was a baby.’

The grandfather of Zane Mellor, 12, shared an emotional moment at the site of the tragedy on Sunday, embracing a tree before sitting and crying beneath it. 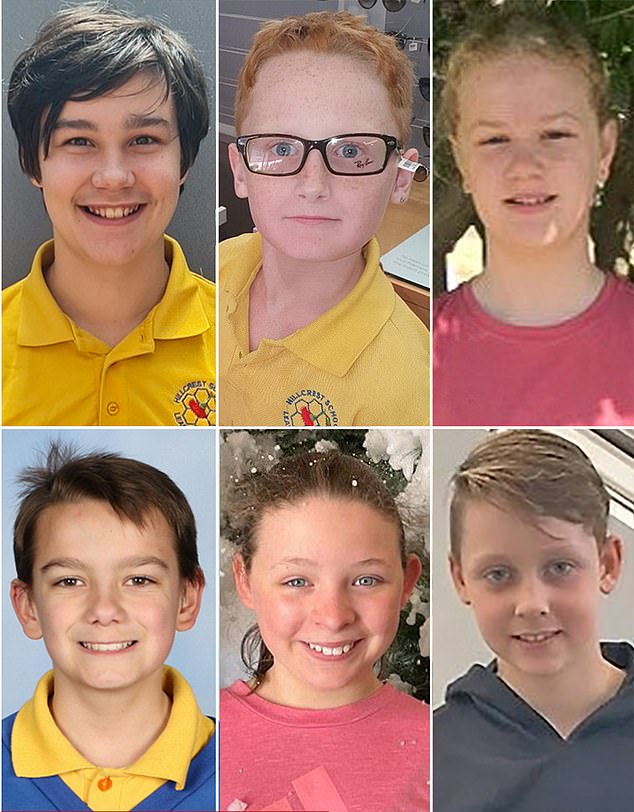 He walked into the grounds behind the memorial, with a counsellor telling the Daily Telegraph he was ‘looking for answers’.

‘I saw a granddad who was wanting some closure, he wanted to know,’ Tasmanian rural health counsellor Bradley Carter said.

‘It was lovely to be with him at that moment. He is not blaming anyone, he is just looking for answers.

‘He doesn’t want jumping castles banned, but he just wants to make them safer so kids can enjoy it and know they will come home.’

The 11-year-old became the sixth child to die, with her relatives saying it had completely destroyed their family.

‘It is just such a tough time,’ relative Karen Wallace said. ‘We don’t even want to celebrate Christmas.’ 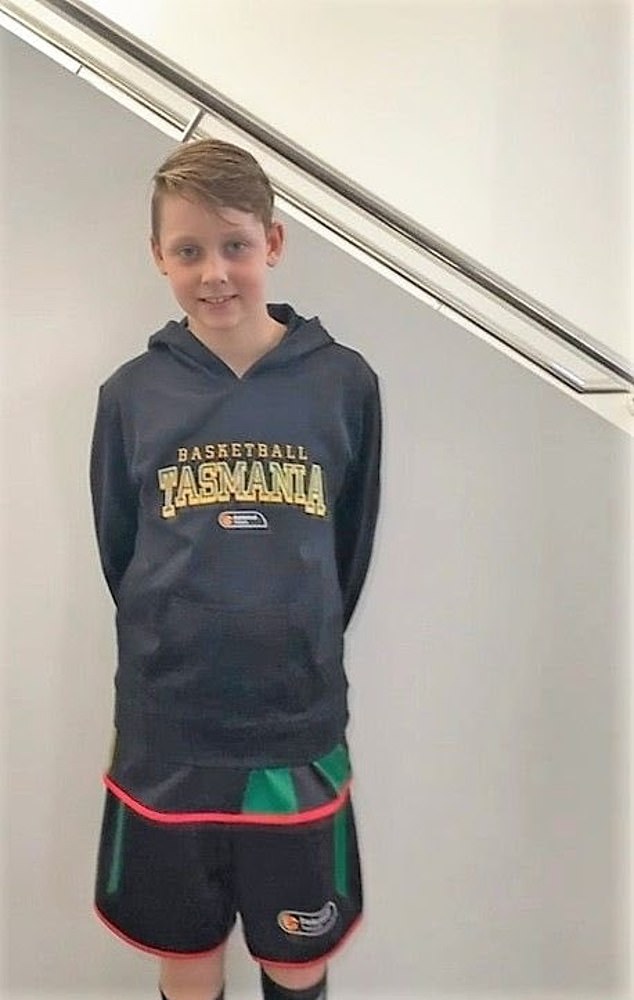 Basketball Tasmania said Chace was a promising athlete who had been handpicked for its future development program.

‘It is with the heaviest of hearts that we say goodbye to our little Warrior, Chace,” the Devonport Warriors Basketball Club said.

‘To all who have been affected by this tragedy, we walk with you in your sorrow. Chace, seek out a basketball court lit up by the stars and keep shooting those hoops.’

The Devonport Christian School, where he was due to start in 2022, is grieving the loss of who would have been one of their ‘future champions’.

‘These last few days have been extremely difficult for all in Devonport and now it is significantly heavier, as we lose one of our future champions,’ a school statement read.

‘To us you are part of our community and will be forevermore.’ 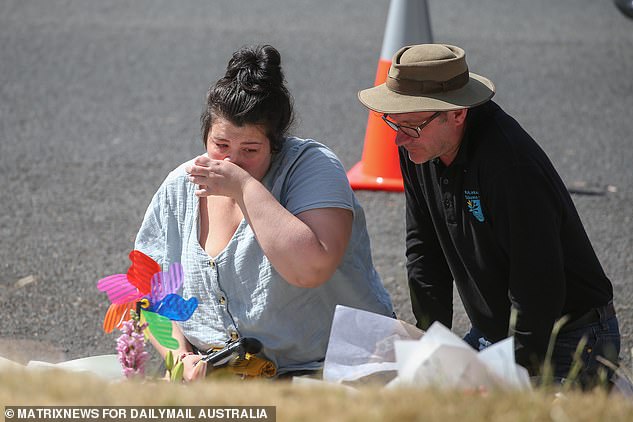 Beau lost six of his Hillcrest Primary School classmates last week after a ‘mini-tornado’ swept the jumping castle into the air, with the children falling 10 metres to their deaths (pictured, Zane Mellor’s mother Georgina lays a tribute at the scene)

Miranda McLaughlin’s son, Peter Dodt, was one of six children killed in the horrific accident in Devonport.

Ms McLaughlin hadn’t seen Peter or her daughters Cassie and Chloe since last Christmas because they live with their father Andrew in Tasmania and state borders kept closing.

When restrictions finally eased in December, the mother-of-nine told Daily Mail Australia that she and her toddler Dylan jumped on a plane to Devonport last week.

Unbeknown to her, it would be the last time she would see Peter alive.

The families of the victims are now planning funerals for their children days before  Christmas, when unopened presents will remain at the bottom of decorative trees.

A service will be held for Jalailah Jayne-Maree Jones at local parish Christ of Church on Wednesday. 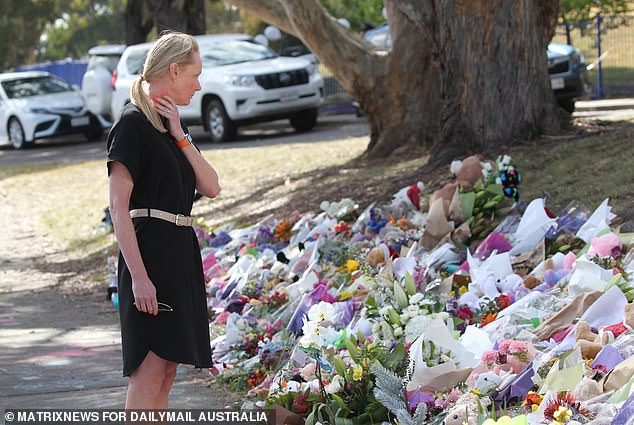