This Texas Town Has Been at the Center of Controversy Over Teaching Racism in School. The New "Southlake" Podcast from NBC News Explores the Firestorm. 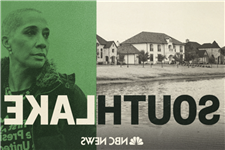 You’ve probably seen viral footage of white parents lamenting the horrors of their kids learning about racism in school. In the new Southlake podcast, NBC News correspondent Antonia Hylton takes an intimate look at how this is unfolding in one town in particular— Southlake, Texas— in the high-performing Carroll Independent School District.

The Carroll ISD school board unveiled a Cultural Competence Action Plan last year and faced swift opposition. Southlake has since become the “poster child of the larger crusade” against what its opponents consider Critical Race Theory, a press statement reads.

Along with NBC News national reporter Mike Hixenbaugh, Hylton co-hosts Southlake, a 6-episode podcast that “follows students, administrators, and families trying to figure out the painful new reality in the place they called home.”

The podcast, as well as the upcoming documentary on the same town, is part of NBCU News Group’s weeklong series, Kids Under Pressure, examining the many challenges students and families face as they return to school.

The first two episodes will be available starting Monday, August 30, with a new episode released every Monday on Apple Podcasts, Spotify or wherever you listen to podcasts.

Southlake’s first episode details how much of this debate started: in 2018 with a Black mom, Robin Cornish, thrust into a racist controversy after a viral video showed several white high school students in their town laughing as they shouted the N-word at a party.

Cornish “recognized the girl leading the chant as the younger sibling of one of her son’s former friends,” NBC News reported earlier this year. The district eventually responded with a plan for its schools to be more racially competent, which set off a firestorm of discontent in the majority white, affluent suburb.

In a Q&A with ESSENCE, Hylton discusses her own experience in a majority white school district and the takeaways listeners can expect from the series. In our conversation, it became clear that while these are new controversies, they reflect ongoing battles with race in America.

This interview has been edited for length and clarity.

ESSENCE: You mentioned that you also grew up attending majority white schools? How did it feel going through this process and reporting in a town with this sort of rabid animosity and antagonism against Black people?

AH: It was a fascinating experience as a reporter, because in some ways, I really was transported back in time, to being in middle school or high school myself in a community [in Boston] not that different from Southlake.

I think Southlake is a suburb that many listeners will find really familiar. There are many Southlakes in every state: these beautiful suburbs or small cities, where there are these perfect homes, manicured lawns, dominant school systems known for producing great athletes sending kids to top schools. And then under the surface, there’s something different. And the only people who seem to speak up about that something different are minorities.

I think the fact that I grew up in that environment was a real strength of mine, working on this project for so many months, because I just understood it so intimately. And I knew what these parents were talking about when they said that something about the fight feels new right now, [but] that tension, the fact that there’s that secret, something being brushed under the rug, has been there for years and years and years, predating me being alive.

ESSENCE: Texas Governor Greg Abbott was re-elected in 2018, the same year the video went viral that launched this present debate, and Abbott been very outspoken about aligning with Donald Trump. Trump was also elected around that same time. How do you think these larger politics play into what’s happening on the ground in Southlake?

AH: Politics in Texas is a huge part of the culture, of course. And so it absolutely plays a major role. But what was interesting is when you’re talking to Black families, or families of other minority backgrounds, is that they knew this was a conservative community. The majority of people in Southlake had voted for Trump. But they felt that in some ways, they might be able to transcend that. They befriended their neighbors. Their kids were playing with them on athletic teams. And maybe this was going to be a way for politics to stay out people’s lives, or at least the everyday sort of basic parts of their lives.

But over time, they start hearing comments that their kids are coming home from school crying about. One of Robin Cornish’s kids was told by a white student in Southlake’s public school system “your mom’s going to be voting for Obama because your dad’s dead and she’s going to need welfare.” [Ed note: Cornish’s late husband, Frank Cornish, was a revered Dallas Cowboys player who died in Southlake in 2008]

So even at a young age, the kinds of rhetoric and nasty talking points that are being thrown out in the elections and in the media are clearly seeping into the minds and conversations of these young kids and affecting these Black students in the school system.

ESSENCE: It’s interesting, because on one hand we hear that diversity trainings are being forced on all of these white families and everyone is trying to make white parents and kids feel bad about themselves. But [as episode one shows] the school board president didn’t even know Black families were feeling the affects of racism because they didn’t talk about it publicly. For people like Robin, it’s not like they were clamoring to be the spokespeople fighting against years of racial antagonism.

AH: We describe Robin as being thrust into a role that she had never asked for. She was a mom whose husband died in a terribly traumatic way, has five kids to take care of, and had multiple jobs. She did not want to carry the burden of this fight for her town. She did not want to become the center of attention. She did not want to be zeroed in on by her neighbors and to be ostracized. But I think what you realize is when there are so few people, then these parents feel like if they don’t do it, who will? If I don’t defend my kids and when they get older, how might they look at me that I didn’t go and fight for them?

ESSENCE: Was there any sense by the end of series, without giving things away, that something can actually be done? Because if people are digging their heels in even further in the face of very explicit racism, and then they’re going on the other end and saying, “we’re not actually racist,” what can actually be done in a community or a country like that?

AH: Yeah that’s the central question. For many of the [Black] people that you’ll meet in this, they have to find their own answer to that question. For some, it’s, “I’m getting out, I’m looking away, and I never want to see Southlake again.” For some, it’s “I’m digging in, I’m fighting back. And you can’t tell me that I don’t belong here, that the American Dream isn’t mine too.”

And, you know, they kind of fall into those two camps of some people believing that Black people don’t have to do the work of telling others how to treat them and that they need to go and flock to and build communities where— to steal a phrase from Nikole Hannah-Jones— they’re not just tolerated, they are really wanted and expected to thrive. Others feel that if we leave, what happens to the few Black people who are left behind, and I have an obligation to stay here and fight.

ESSENCE: So you mentioned options Black residents of Southlake are weighing, but did you get a sense that any of the white residents in Southlake were moving towards some self-reflection? Or was there still this denial or refusal to think about racism?

AH: You know, I asked one white mom who was raised very conservative, but who heard stories like Robin’s and it really broke her heart. I asked her at one point if anyone on either side of this fight has changed their mind. And she told me no.

There’s this divide between adults who dig their heels in and have their way of life, their set of experiences or beliefs, and the politicians that they trust. But the kids are having much more mature, open-ended conversations. Even when they disagree, they are kinder to each other often more than the adults in the community.

Even when some of the adults talk about their frustration that neither side can change the other’s mind, you hear consistently on all sides that the kids are—not to be cliché—the future. At least the kids are going to continue the work of trying to find the solutions to try and make Southlake a place where diversity is valued, is comfortably talked about, and is reflected in school and in leadership.