The survivor's reset: Boris Johnson 'to carry out a Cabinet reshuffle'

A reset for the great survivor: Boris Johnson ‘plans to carry out a Cabinet reshuffle and put tackling the cost of living at the heart of Tory priorities’ by the summer after a bruising night at the polls

Boris Johnson is planning a major government ‘reset’ before summer to consolidate his grip on No10 following yesterday’s ‘tough’ election results.

Whitehall sources said the Prime Minister would carry out a Cabinet reshuffle and put tackling the cost of living at the heart of Tory priorities for the next election.

Yesterday, Mr Johnson hinted that the Government would come forward with more help for fuel bills if energy costs continued to soar.

The Conservatives were last night on course to lose about 300 seats in local elections in England – far fewer than had been feared.

The PM’s backbench Tory critics, who had pencilled in yesterday for a possible coup, were silenced, with only long-time rebel Tobias Ellwood calling for him to quit.

The former defence minister said it had become a ‘requirement’, adding: ‘We’re kidding ourselves if we think everything’s OK.’

But Tory top brass remain nervous that the PM could still face pressure if he is hit with further Partygate fines or fails to deal with the cost of living crisis. 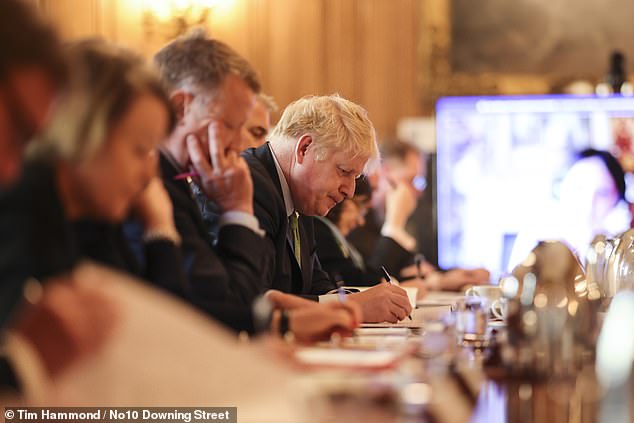 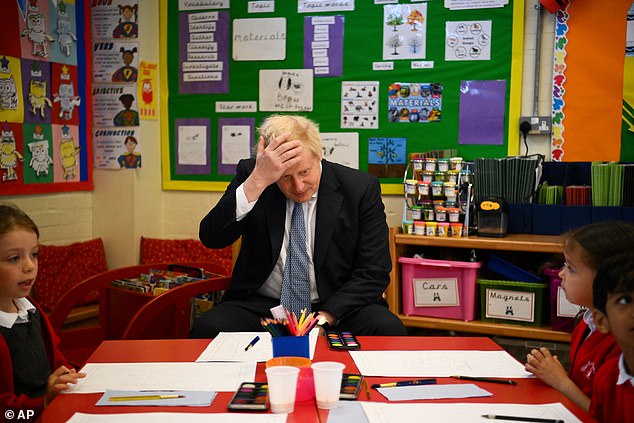 Yesterday, Mr Johnson (pictured at a primary school in South Ruislip on Friday) hinted that the Government would come forward with more help for fuel bills if energy costs continued to soar.

At 7pm last night, with 141 of 146 councils in England having declared their results, Labour had gained just 51 councillors, compared to the Liberal Democrats who had an extra 182.

But a BBC projection suggested Labour would make gains if there was a general election. It put the party on 291 seats, with the Tories on 253 and the Lib Dems on 31.

This would put Labour and the Lib Dems within touching distance of the 326 needed for a majority.

A source said the PM would hold a reshuffle within two months to ‘put in place the team who will take us into the next election’.

He is also expected to give a major speech setting out the Government’s priorities for the rest of the Parliament, including softening the blow of the cost of living crisis, delivering on the levelling-up agenda and tackling crime.

‘There will be a reset moment in the next couple of months,’ the source said.

‘The PM will set out to the public the things they can expect us to concentrate on in the run-up to the next election. You can expect to see the cost of living at the top of that.’

Another source said the PM was considering making Priti Patel Tory chairman as the next election approaches.

Senior Tories urged the Government to introduce tax cuts to ease the cost of living.

Ex-leader Sir Iain Duncan Smith said: ‘It is no good promising tax cuts in the future when people are struggling now. The PM has to overrule the Chancellor on this.’

Former Cabinet minister Sir John Redwood said tax cuts should be ‘at the heart’ of next week’s Queen’s Speech.

A Government source said ministers would consider ‘more help’ on fuel bills later this year if costs continue to rise, but played down the prospect of tax cuts.

The PM – who joined an art class at Field End Infant School in Ruislip, west London, yesterday – acknowledged the election results were ‘mixed’, but stressed that mid-term polls were always difficult.

The Tories gave ground to Labour in London, losing flagship councils in Wandsworth, Westminster and Barnet.

They also suffered setbacks at the hands of the Lib Dems in parts of the South, such as Somerset.

But they held off Labour in the so-called Red Wall in the North and Midlands, gaining some seats in Labour heartlands such as Hartlepool.

Mr Johnson said: ‘We had a tough night in some parts of the country, but… in other parts you are still seeing Conservatives… making quite remarkable gains in places that haven’t voted Conservative for a long time, if ever.’