TERRIFIED kids sobbed as heartless antivaxxers stormed a pantomime and ordered them to take of their face masks in a shocking midday protest.

Groups of tots gathered to watch Jack and the Beanstalk at the Milton Keynes Theatre watched in horror as placard-clad activists took over the foyer during the interval. 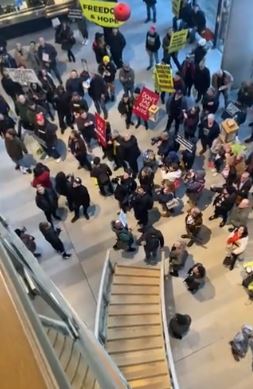 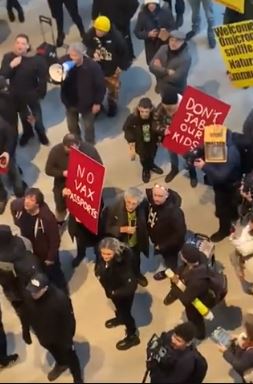 One theatre-goer told The Sun how kids cried while "aggressive" adults shouted at them to "take off their masks".

Covid booster jabs protect against Omicron and offer the best chance to get through the pandemic, health officials have repeatedly said.

The Sun's Jabs Army campaign is helping get the vital extra vaccines in Brits' arms to ward off the need for any new restrictions.

Alfie Drake, 19, was watching the matinee show with his younger sisters, aged 12 and 16, and his two-year-old cousin.

He watched in horror as the group stormed in while he was walking down to the bar to buy a drink.

THEY TOOT… THEY SCORE

Queen's Guard knocks over boy while on duty – but who is in the wrong?

Alfie said: "I am shocked at what we had seen. This panto was a for all families to enjoy with their kids.

"It's disgraceful that older men and women were loudly shouting and blowing whistles and making some kids cry.

"When the panto resumed, most people who had initially been watching had left.

"They came across very aggressive and were shouting at families with their kids to take off their masks."

He added: "This is the panto, not parliament."

Their shocking protest came the same day that a group of antivaxxers stormed a Covid test and trace site – also in Milton Keynes.

Hundreds of mask-less demonstrators shouted chants such as “Boris lied” – while one man is seen picking up orange cones and firing them at the centre’s entrance.

Stressed security workers are seen walking around in high vis vest while speaking into walkie talkies while members of the crowd videoed and heckled them.

A protester over a megaphone is heard telling the crowd to “keep it peaceful” but after a few minutes some members of the group entered inside the testing centre.

One woman posed for pictures inside the site holding a sign reading “Reclaim the NHS, end jabs tyranny now”.

She then picks up boxes of test tubes, swabs and other testing equipment before walking out with a smile on her face. 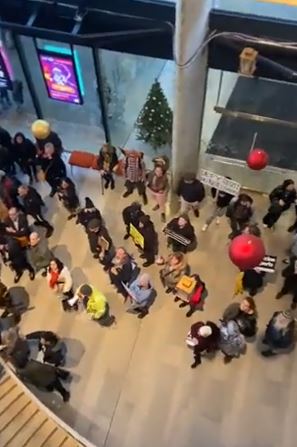