Telstra has lost a bid to take its fight over new supersized digital payphones the telco had intended to install in Melbourne and Brisbane to the High Court.

The digital phone booths, described by Melbourne’s deputy lord mayor as “billboards masquerading as payphones”, feature 75-inch (1.9 metre) LCD screens capable of showing four advertisements a minute. Telstra had planned to install 1800 of the units across the country. 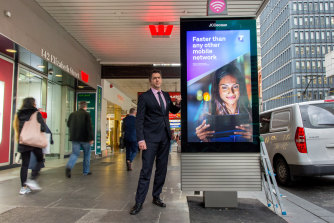 Late on Thursday in the High Court, Telstra lost its bid to appeal a Federal Court decision preventing it from installing the “next generation” payphones without planning permission in Melbourne and Brisbane. It will also be required to pay legal costs to the two councils.

The cities of Melbourne, Sydney and Brisbane argued that Telstra intended to use the facilities to display third-party commercial advertising once they were installed, circumventing usual planning practices. 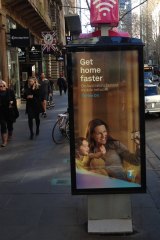 A Telstra telephone booth in Melbourne’s Collins Street with an advertising display sign tacked on the side.Credit:Simon Johanson

Telstra filed proceedings in the Federal Court in 2019 to clarify the law after the City of Melbourne rejected its application for approval to run commercial advertising on 81 proposed new payphone billboards.

Under Commonwealth law, Telstra is permitted to install “low impact” public payphone cabinets or booths without a planning permit if certain other conditions are met.

Telstra argued the new payphones were low impact because they were not used to display commercial advertising “at the time of their installation” and planning approval would be required for them to do so.

But the councils argued that because the payphones would carry third-party advertising, they should therefore be subject to the usual council planning approval process.

The ruling means that Telstra will now be required to seek planning approval before installing the next-generation payphones in Melbourne and Brisbane. Sydney did not join the latest action.

A Telstra spokesman said the organisation respected the decision of the High Court to refuse to hear the appeal.

“We said our goal from the beginning was simply to get clarity on whether we can install our new payphones as low-impact facilities,” he said.

“Whilst we will no longer be installing the new payphones as low-impact facilities, we still believe in the community benefits of the new payphones, including the USB device charging [and] community and emergency services messaging and will look to work collaboratively with councils and stakeholders across Australia to proceed with payphone upgrades, following the local planning process where possible.”

Melbourne deputy lord mayor Nicholas Reece said the ruling was a win for millions of pedestrians in the three capitals.

“It was a truly David and Goliath battle, and we’re proud of this victory on behalf of Australia’s cities,” he said.

“All along we have maintained that the supersized phone booths are designed to generate advertising revenue instead of providing a community service. They were billboards masquerading as payphones.

“We don’t want people to be bombarded with oversized and intrusive commercial advertising on public infrastructure.”

In its submission to the court last year, the City of Melbourne said Telstra and outdoor advertising company JCDecaux were “seeking to take advantage … [of planning exemptions] to install structures that act as electronic billboards for third-party commercial advertising in ideal revenue-generating locations”.

“The means by which Telstra is seeking to engineer that outcome is by attaching a payphone instrument to one side of a panel structure, and calling it a ‘public payphone cabinet’,” the submission said.

Our Morning Edition newsletter is a curated guide to the most important and interesting stories, analysis and insights. Sign up here.