Before the action stars worked together on movies like The Expendables franchise in the 2010s and carved pumpkins together (this past Halloween), Stallone, 76, and Schwarzenegger, 75, did not get along.

“We couldn’t stand to be in the same galaxy together for a while. We truly, truly loathed each other,” Stallone recalled on the U.K. talk show The Jonathan Ross Show over the weekend, according to Insider, while discussing their careers in the ’90s.

Stallone recently opened up about his friendship with the Terminator actor, telling The Hollywood Reporter that Schwarzenegger is “very wise and he loves to talk about philosophies which have got him to where he is.”

RELATED: Sylvester Stallone Says His Absence from Creed 3 Is ‘Regretful’: ‘I Know What It Could Have Been’ 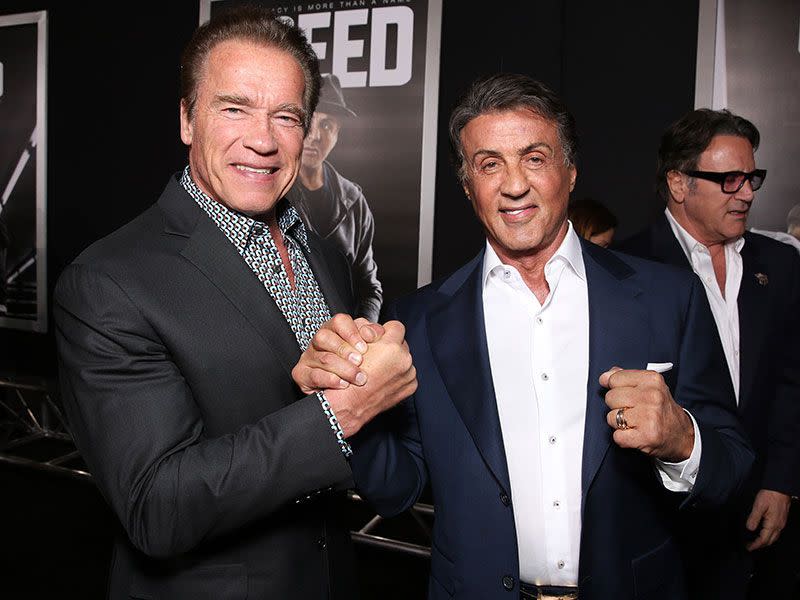 Never miss a story — sign up for PEOPLE’s free weekly newsletter to get the biggest news of the week delivered to your inbox every Friday.

“It’s good to talk to a man who actually has put his money where his mouth is and he’s achieved that,” said Stallone. “Then we start goofing around and being crazy — just laughing at the old times. I told him, ‘We are the last two tyrannosaurus.’ We’re the last two meat-eaters and there’s not much beef left out there. So we better enjoy each other.”

Also in the THR interview, Stallone referenced a rumor that Schwarzenegger tricked him into taking a part in 1992’s Stop! Or My Mom Will Shoot to have a flop on his résumé back during their rivalry — which Schwarzenegger confirmed was true.

“Stop! Or My Mom Will Shoot was supposed to be like Throw Momma From the Train with the mom as this really nasty piece of work. Instead you hire the nicest woman in Hollywood, Estelle Getty, who you wish was your mother. That’s the end of that! Also, I had heard Schwarzenegger was going to do that movie and I said, ‘I’m going to beat him to it,’ ” Stallone said. “I think he set me up.

Said Schwarzenegger, “It’s 100 percent true. In those days we did all kinds of crazy things to get ahead in our rivalry. Luckily for us and everyone else, today, we root for each other. Thank God, because we sure don’t ever need another Stop! Or My Mom Will Shoot.”

On The Jonathan Ross Show over the weekend, Stallone again addressed the Stop! Or My Mom Will Shoot snafu, joking, “At least I wasn’t pregnant in a film, Arnold. We’re even,” referencing Schwarzenegger’s 1994 movie Junior.