‘Struck by lightning twice’: How Al-Taqwa College rallied in the face of a new outbreak

It was Wednesday afternoon and Nejla Mohammad picked up her eight-year-old son from school.

When the 33-year-old mother of four arrived home she received a text message from the school alerting her that one of the teachers had tested positive for COVID-19 and asking them all to isolate immediately. She panicked. Her son goes to Al-Taqwa College, an independent Islamic school on 20 hectares in Truganina, on the western outskirts of Melbourne. 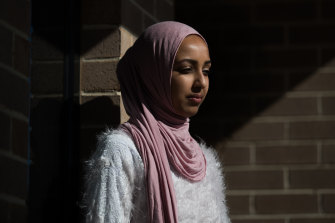 The school has become known for COVID-19 outbreaks. This would be its second, after being at the centre of a cluster in June last year, which by that August 18 had grown to 210 people.

On the school’s Facebook page, parents complained the school wasn’t providing enough information about how the outbreak occurred. On social media, it was targeted by racists who blamed the school and the Muslim community for the outbreak.

On August 4, the state had just recorded a “doughnut day”. The thought of a positive case was the last thing on Ms Mohammad’s mind. She had no time to prepare for 14 days of isolation, meaning no leaving the house for shops or exercise and testing on day one and day 13.

But unlike last year, the Mohammad family did not hear of the school’s case from the media.

“We heard from the school before we heard from anyone else. They acted fast. The whole school community and everyone that was told to get tested came to the school and got tested,” Ms Mohammad says.

The Department of Health confirmed that 1880 people were tested at the school, initially. The school again offered testing on site for those needing a day-13 test, and the pop-up site has since closed. Premier Daniel Andrews called it “one of the highest and fastest performances we’ve seen of any school, anywhere, not just in Victoria”.

Eight of the new cases recorded on Sunday were connected to Al-Taqwa. In total, there are 150 linked to this outbreak, according to the school, the majority of whom have been in isolation the entire time. More precise figures were not available from health authorities at the time of print.

Ms Mohammad and her family were tested at the school and all were negative.

She says although communication has improved, it is not perfect. The issue of how to get vaccinated despite being in quarantine was brought up “a lot” in Zoom consultation meetings between the Department of Health and the Al-Taqwa College school community. Only those who tested at the school site could get vaccinated. 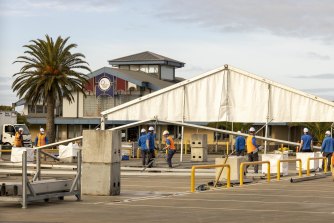 A pop-up testing site was established on August 5, the morning after the school was forced to shut.Credit:Wayne Taylor

But the major achievement was that over just four days, more than 1250 students, staff and family members were vaccinated at a pop-up clinic on the school campus – a first for an Australian school.

The school organised daily Zoom sessions with staff, students and families for the first two weeks of the outbreak. Several were with the Department of Health and Victorian COVID-19 response commander Jeroen Weimar’s crisis response team.

The school also sent regular text messages updating families on new positive cases and giving updates from the Health Department. It is still not known how the index case, a teacher, contracted the virus.

On the school’s website, COVID-19 update letters have been published every day since the outbreak. The letters cover case numbers at the school, the testing procedures and food delivery assistance.

The school has made available a series of short video explainers about processes on day 13 of quarantine – when people are required to leave the house to get tested – in English, Urdu, Arabic and Somali.

The Department of Health confirmed the school was receiving “tailored” support, including priority testing at the Sunshine Hospital and Melbourne Showgrounds.

The school looks like any other except it is attached to Al-Taqwa Mosque, a green dome-shaped building with a bronze minaret towering over the school campus.

Al-Taqwa College was founded in 1986 by principal Omar Hallak, starting with 25 students. Today it has more than 2200, from prep to year 12. They come from backgrounds including Middle Eastern, south Asian and African. Some travel long distances to attend, including from the public housing towers in Flemington and North Melbourne. The school employs Muslim and non-Muslim teachers.

Rima Kanj, the head of primary and student wellbeing, has worked at the school for a decade and says it is popular because of its reputation for providing a strong academic education, as well as an Islamic one.

Ms Kanj has had the role of supporting students and staff during the recent lockdown.

“When we went into lockdown, we contacted over 160 families. We started a tier process and started contacting the [students] who we knew were at risk. Then we turned our focus on the students and families living in the high-rise apartments in Flemington, Kensington and North Melbourne,” she says.

The school was overwhelmed by that outbreak and struggled to manage what it calls “collateral damage”, including intense media scrutiny.

A week into the 2020 outbreak, it hired Terry Barnes, a policy consultant who has previously worked in government, to communicate with the government and navigate media. “We’ve been struck by lightning twice,” he says.

Since the positive case in a teacher on August 5, Al-Taqwa has been working closely with the Department of Health to provide sessions to staff, students and parents, and has been providing fact sheets in Arabic, Urdu and Somali about the restrictions and vaccinations – a different approach from last year’s outbreak.

Mr Barnes says: “The government kept us at arm’s length last year. This year has been totally different. Instead of being kept out of the loop, we have been invited in as a full partner.”

After the announcement of lockdown six, the Premier addressed more than 70 multicultural and faith leaders across the state in a private Zoom meeting.

He told them: “We need you to step up again.” 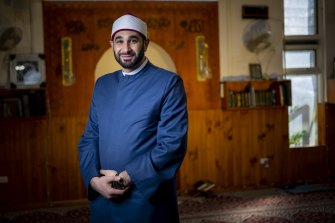 Imam Alaa Elzokm says it is a “religious obligation to protect the wider community” by getting the vaccine.Credit:Wayne Taylor

Imam Alaa Elzokm, a community faith leader from the Heidelberg Heights Mosque has been working alongside government to communicate the COVID-19 response to Muslim communities.

He is encouraging the Muslim community to get the vaccine and says it is a “religious obligation to protect the wider community”.

The Al-Taqwa student wellbeing team, with help from Independent Schools Victoria, distributed fact sheets and information in different languages to students and families living in the public housing estates.

The school has been the subject of racist abuse online and Ms Kanj says some businesses run by school families have been targeted by racists. “The school is supporting the families,” she says, including helping parents obtain financial assistance from the government while they are in isolation.

The school has also been organising food and the delivery of medication for students and families through two main support groups, via WhatsApp and through the school’s internal website.

Ms Kanj says that through the website, parents can get information about community groups offering free cooked Halal meals from the Muslim Women’s Council of Victoria, food from the Halal Food Bank, local fruit and vegetable stores, Halal butchers and fast food restaurants offering discounts and free delivery. “It’s a long list.” she says. A pharmacy is also offering free delivery services. The list is added to every day and now includes 20 businesses ready to help.

The wellbeing team has been working long hours, while still committing to their teaching responsibilities through online learning.

Most of the Al-Taqwa College community has now begun emerging from quarantine, and into lockdown.

Ms Mohammad, an events planner and law student, is helping two of her four children with remote learning, around her own studies; the other two are below school age. “It’s crazy,” she says.

Mr Barnes says: “We are concerned for those who have tested positive and will support them through another 14 day quarantine.”

But if it is unlucky again, “the school is prepared for another outbreak”.