Jerusalem: On the streets of Sheikh Jarrah, a Palestinian neighbourhood in East Jerusalem, a foul smell lingers in the air.

It’s skunk water, a fluid that smells like a cocktail of rotting carcasses and raw sewage. It is a non-toxic crowd control weapon and is being sprayed across East Jerusalem by Israeli police as it cracks down on protests against the looming eviction of Palestinians from their homes.

The eviction process was a key factor in the wave of violence that spread across Israel and the West Bank in May, while Hamas in Gaza has cited it as part of their grounds for firing rockets at the Jewish state. 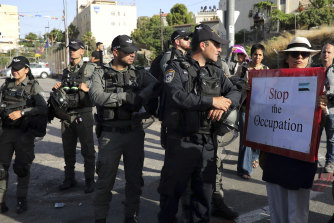 Israeli police stand guard at a demonstration in support of Palestinians in Sheikh Jarrah of East Jerusalem, where dozens of families face imminent forcible eviction from their homes by Israeli settlers.Credit:AP

Since May 21, a ceasefire between Israel and Hamas has held – but if tensions in neighbourhoods such as Sheikh Jarrah continue, there are fears of renewed violence.

And while a cross-party coalition is poised to remove prime minister Benjamin Netanyahu from power this week, Palestinian leaders doubt the change in leadership will have any impact on the eviction plans. 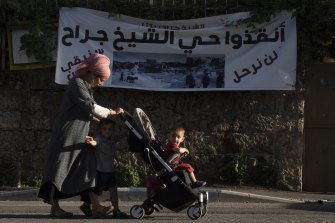 A Jewish settler and her children walk in Sheikh Jarrah. The banner in Arabic reads: “Sheikh Jarrah neighbourhood – we will not leave – we will remain steadfast.”Credit:AP

At least six Palestinian families face being evicted in the coming weeks, in what Israel has sought to play down as a private “real-estate dispute” where the residents are accused of building without permits and refusing to pay their rent.

However, the Palestinians say the eviction process is designed to move Jewish settlers into the neighbourhood and expand Israel’s presence in East Jerusalem which the Palestinians claim as their own capital.

“No one can tolerate the smell [of skunk water] anymore,” said 22-year-old Alissar Abu Hasna, whose immediate family has lived at their home in Sheikh Jarrah since 1956.

“We had to throw some of our clothes away because the smell wouldn’t leave the fabric.” Even so, his mother added, her family would continue to protest against the eviction process and stay in their home “until the last breath”. 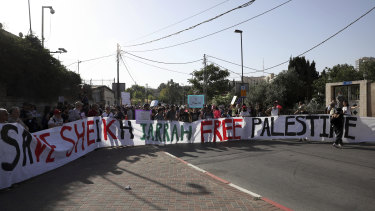 “We won’t leave our house or neighbourhood no matter what. They will have to come and get us out forcibly.”

Israel has defended its use of skunk water – first deployed in 2004 – as a non-violent form of crowd control, though human rights groups claim it is being sprayed in areas of unrest as a form of collective punishment.

While Sheikh Jarrah is just a small neighbourhood in Jerusalem, the row over evictions is fuelling tensions throughout Israel as well as the West Bank, Gaza and beyond.

And it is not the only neighbourhood facing evictions – a similar process is under way in nearby Silwan.

In protests across the world over the past month – including New York, Brighton UK, Peshawar, Doha and Bradford – Palestinians and their supporters have cited Sheikh Jarrah as one of their main causes along with the conflict in Gaza.

Many families in Sheikh Jarrah moved there after the war in 1948, when hundreds of thousands of Palestinians fled or were expelled from their homes in what is now Israel.

Ms Abu Hasna compared the eviction process to a kind of “second Nakba”, referring to the mass displacement of Palestinians during that period, which is known in Arabic as “the catastrophe”.

But the settlers moving in claim that the homes never truly belonged to the Palestinians in the first place.

The settlers also cite an Israeli law which allows Jews to recover East Jerusalem property that was in their possession prior to 1948. But according to B’tselem, an Israeli human rights group, no such powers exist for Palestinians.

“This is not Sheikh Jarrah, this is Shimon Hatzadik,” said Jewish resident Yonatan Yosef, using the Hebrew name for the area.

“The houses do not belong to them [Palestinians],” he added. “They should pay rent, they should recognise that the owners are Jewish and have the rights to the buildings.”

Dozens of Palestinians have been injured during protests over Sheikh Jarrah so far, while seven Israeli police officers were wounded when a Palestinian man rammed his car into a roadblock.

During each night of protests, the crack of stun grenades and rubber-tipped bullets echoes around the city, while the next morning the reek of skunk water lingers in the air.

As the protests continue, the Israeli supreme court is due to issue a final verdict in the coming weeks.

The man set to oust Netanyahu this week, the right-wing Yamina party leader Naftali Bennett, is an outspoken supporter of expanding Jewish settlements and has called for swathes of the West Bank to be annexed.

Under the terms of the coalition, which has not yet been finalised, he would serve as prime minister for two years, before handing the leadership to centrist leader Yair Lapid.

In one recent flare-up, an Israeli settler who had moved into the home of a Palestinian family was filmed telling its owners: “If I don’t steal your home, someone else will steal it.”

But there is at least one thing that both sides can agree on: the skunk water is making life in Sheikh Jarrah much less pleasant for everyone.