Skin out of the game: the inmates erasing their gang tattoos to create their better selves

Wheaton, Illinois: Under penalty of a beating or death, Erik Eck pledged at age 13 to adhere to the Latin Kings’ first rule: “Once a King, always a King.” Tattoos that bedeck his entire body express his fealty forever to one of the largest gangs in the US.

Now 36, the longtime Latin King enforcer is trying to leave anyway. He is seeking to scrub his past by erasing his gang tattoos through a new gang-cessation and jobs program he and 11 other inmates signed up for at a Chicago-area jail. 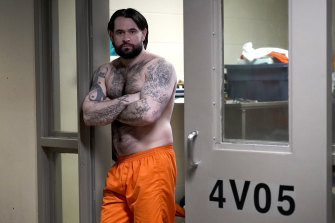 Erik Eck, a former member of the Latin Kings gang stands in the doorway of his cell at the DuPage County jail displaying tattoos that symbolise his status with the gang.Credit:AP

The Associated Press got exclusive access over two days to the first 12 inmates enrolled in the largely privately funded program at the DuPage County Jail and to their cellblock. For their safety, they’re isolated from the jail’s 500 other inmates, half of whom are in gangs.

Eck, jailed on burglary charges, earned the nickname “Hollywood” on the street for his swagger. But nightmares jarred him awake for days before he recently walked into the jail’s new tattoo-removal wing.

“This life is all I’ve ever known,” Eck said about agonising over his decision to deface the tattoos that have been central to his identity for 20 years. “But it’s for the better.”

He added: “I feel like the change has officially begun.” 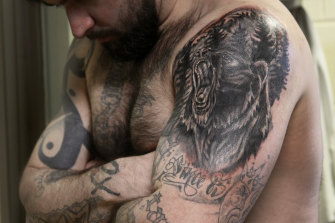 Under penalty of a beating or death, Eck pledged when he joined the Latin Kings in Chicago at 13 to adhere to the gang’s first rule: “Once a King, always a King”. A roaring lion tattoo — a favourite Latin Kings symbol — was recently converted to a roaring bear.Credit:AP

One goal is to land the inmates jobs in horticulture, welding and other fields they’re learning, said the program’s civilian director and chief architect, Michael Beary. He said there’s booming interest among businesses scrambling to address COVID-19-driven labour shortages.

Jobs training was available previously, but the gang and tattoo emphasis was added this year.

“I used to beg businesses to hire these guys. Now they say, ‘As long as they show up for work, we don’t care what they did’,” said Beary, a longtime business owner and executive director of the nonprofit JUST of DuPage, founded by a Roman Catholic nun to develop re-entry programs for inmates.

The inmates aren’t promised jobs or reduced sentences. But if they graduate, they do get help searching for work and relocating away from their gangs. A letter from the sheriff touts their participation.

To graduate, participants must have their gang tattoos removed or covered with other tats. It’s proof, said DuPage County Sheriff James Mendrick, they’re serious about forsaking their old lives.

“It’s a point of no return,” he said. “It’s a commitment to themselves – and to us, that we aren’t wasting our time.”

The first tattoo Eck had covered was one on his arm of the Latin Kings’ initials. Jail-sanctioned tattooist Tom Begley inked the image of a deer over it in a four-hour session in February. Covering all of Eck’s gang tattoos will take months.

A roaring lion – a favourite Latin Kings symbol – was recently converted to a roaring bear. Eck has to be careful to pick animals that aren’t other gangs’ symbols. A rabbit, he said, is out. It’s a symbol of Latin Kings rival Two Six Nation.

Begley and his wife, Meagan Begley, of the suburban Electric Tattoo Parlour, jumped at the chance to lend their skills. Inmates painted a mural on a wall in the jail’s three-chaired tattoo studio. It says: “Hope, purpose and redemption.”

I used to beg businesses to hire these guys. Now they say, ‘As long as they show up for work, we don’t care what they did’

On a previous day, Tom Begley transformed a Satan Disciples tattoo on Jaime Marinez’s forearm from a Christian cross fashioned from rifles into the image of a vulture.

Nearby, Meagan Begley removed hand tattoos of 27-year-old Latin Count leader Gilberto Rios, wielding a pen-like tool to scrape off outer skin, then injecting a saline solution. That pushes ink into a scab, which flakes away over several weeks.

“There’s lots of crying by them,” she said, but not due to the pain. “These tattoos have been their identity. [Giving them up] is very emotional.”

Once she removed from Rios’ hand was a backward “D”, a symbol of disdain for Marinez’s gang.

The two chatted amiably, comparing tattoo work done on them that day.

“If they saw each other on the street,” Beary said, “they’d try and kill each other.”

Affluent DuPage County isn’t considered a hotbed of gangs. Mendrick, elected sheriff as a Republican, contends violent crime in his county is often committed by gangs from Chicago, in neighbouring Cook County.

“I am a religious man,” he said. “I feel I am answering my calling.” Beary cites religion as a motivation, too.

The program also offers classes on the Bible, anger management and decision-making. And it provides counselling to drug-addicted inmates.

Once freed, Eck wants to own a business. He believes he can apply leadership skills honed in his gang.

He’s blunt about the perks of gang life.

“Being a gang member in my neighbourhood was better than being the president of the United States,” he said. “I wanted the cars, the women … the power, the respect.”

The killing of his best friend two months before Eck was jailed a year ago began changing his perspective. It was an internal hit by a Latin King who coveted his friend’s higher perch in the gang hierarchy, Eck said.

“He took 16 bullets, four in the face. It was like, enough is enough,” said Eck, adding that guilt at having hurt others also began weighing on him.

Other participants also cited trauma from years of gang violence as motivation for wanting out. Chicago police say most of the nearly 800 homicides in the city last year, the most in a quarter century, were gang-related.

In another tattoo session, Tom Begley traced a new image over a scar on Marinez’s chest from when he was shot last year at a traffic light.

The tattoo is of a clock set to 6.20, memorialising the date his father died of a heroin overdose on June 20, 2016. Marinez turns quiet when he mentions his dad.

The 21-year-old knows he’s putting himself in peril by spurning his gang.

Eck credits Beary, whom he describes as a father figure, for persuading him to join the program.

“I have never had anyone come up to me and say there’s another way to live,” he said.

Eck wants to create a meaningful life. One more criminal conviction, he said, could send him to prison for life.

There are already signs of his transformation.

Speaking on a recent afternoon, he appeared startled when he realised what pronoun he was using to talk about the Latin Kings.

“I’m saying ‘they’ not ‘we’,” he said, looking at Beary sitting nearby and laughing.

He has stopped answering to his street name, too. When several inmates recently addressed him by it, he bristled.

As he struggles to reinvent himself, he says he wants nothing to do with his gang persona.

“I want to be able to wake up and not see that person anymore.”