‘To see any animal die in such a public manner is tragic’: Shocked Britons grieve London police horse which collapsed and died suddenly at the Notting Hill Carnival

Tributes have poured in on social media for a police horse that suddenly died at Notting Hill Carnival.

Twitter users shared their distress at the news after Sandown, a 14-year-old chestnut gelding, collapsed at around 9pm on Sunday at the west London event.

Among the condolences, one person wrote: ‘To see any animal die is tragic. For it to happen in so sudden and public manner makes it worse. My condolences to all Met Police colleagues of Sandown.’

A video captures the tragic moment in which the horse, stood at 16 hands high, topples over as an officer desperately tries to take control of its reins.

More officers then rush over to help their colleague tend to the horse, which is lying motionless on the floor.

Carnival goers can be seen watching on in horror while police attempt to keep the public at bay.

Despite being provided emergency care at the scene, Sandown was unable to be saved and tragically died shortly after.

While most responses to the sad death were tributes to the horse and colleagues, some users also pointed out who should be held accountable.

‘So sorry to be reading this’, one user said, ‘I do hope there will be an inquiry into this tragic scene of events.

‘Too hot? Too old? Fright? I hope the Met will be accountable.’ 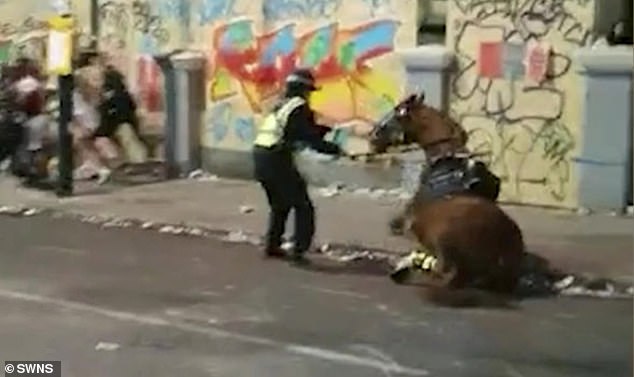 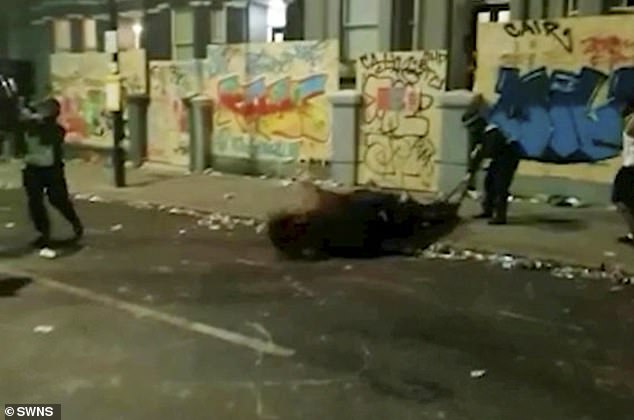 An eyewitness said of the incident: ‘I was around the horse for half an hour or so before it collapsed and it looked really uncomfortable.

‘It was mumbling constantly and the officer was trying to get it to calm down.

What is a chestnut gelding?

A gelding is a castrated male horse. Castration makes the animals more even-tempered and therefore easier for the riders to handle.

‘In the end it looked like the heat and the environment was too much for it and it just started fitting.

‘It was horrific to watch, and I’ve struggled to sleep the last few nights thinking about what happened.’

A statement described the death as ‘sudden’ and said a post-mortem examination is under way.

The force states that a normal tour of duty for a Mounted Branch officer consists of a patrol of three to four hours but adds that this may be extended depending upon the duty they are required to perform.

It is not known how long PH Sandown was on duty before he collapsed and died.

The 14-year-old chestnut gelding has been described as one of the Metropolitan Police’s most experienced horses, having served an ‘impeccable’ seven years in the force.

Most police horses retire after more than a decade of service when they reach the ages of 20 to 22.

The force described PH Sandown as playing ‘an integral role in helping to police London’.

The Met said PH Sandown had been gifted to the force in 2015, quickly winning over officers due to his good nature.

The force described Sandown as ‘a pro at policing all types of events across London’.

They added: ‘He demonstrated his bravery and courageousness at numerous football fixtures whilst also being selected to perform at the Mounted Activity Ride at Olympia, and the Mounted Musical Ride.’ 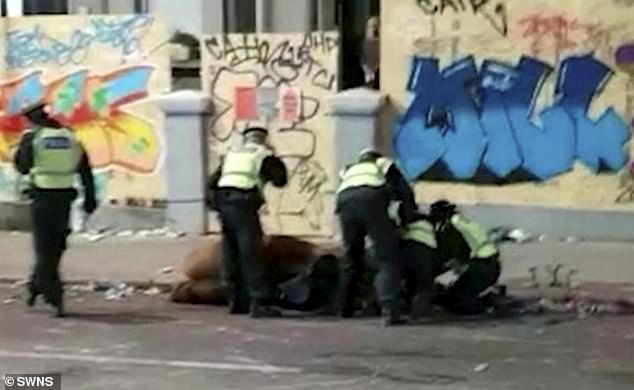 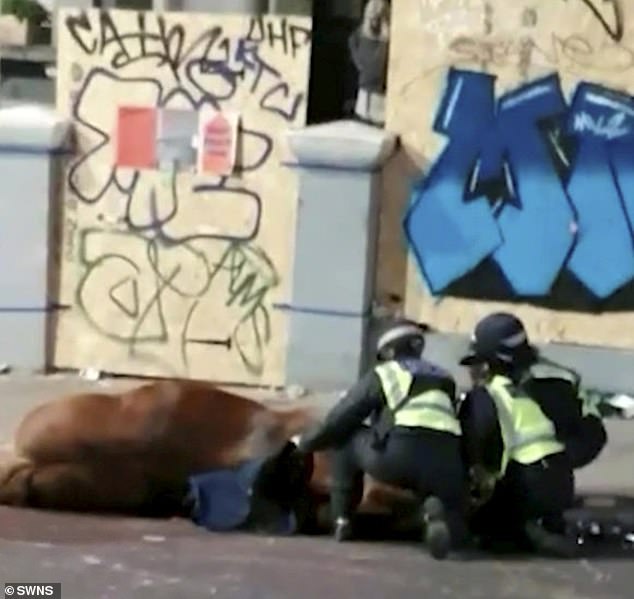 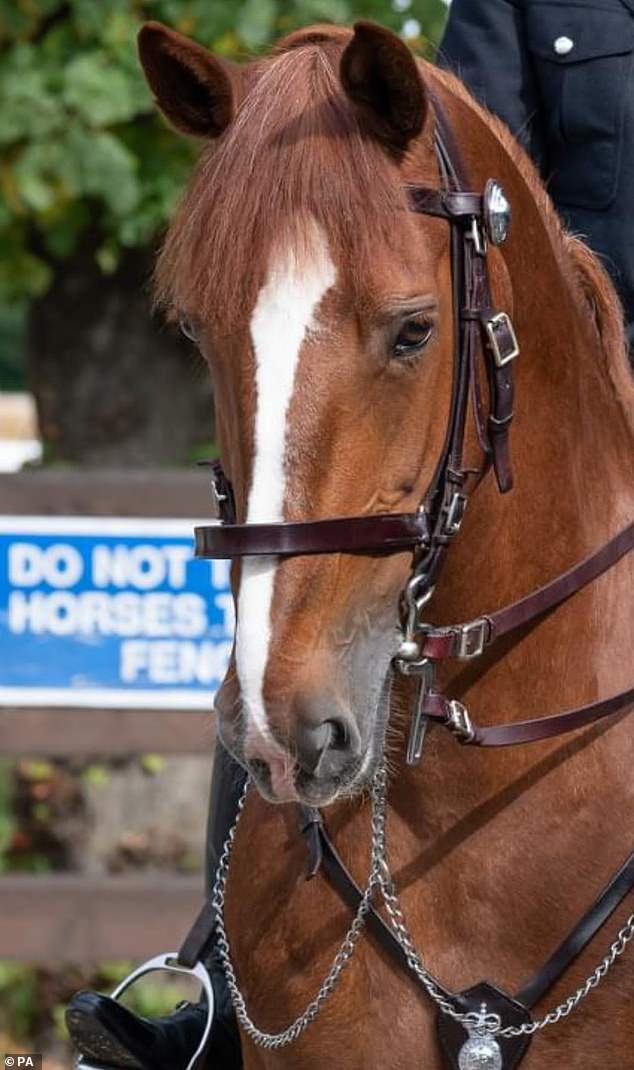 The force reported PH Sandown was also selected to perform at the Mounted Activity Ride at Olympia and the Mounted Musical Ride.

It went on to say: ‘PH Sandown was a massive part of the Mounted Branch family and was loved dearly. He will be sorely missed by all.’

The Met added that, while it is too early at this stage to determine a cause of death, a post-mortem is under way.

The Met’s Mounted Branch dates back to 1760 when it was first introduced to combat the problem of highwaymen in London.

These days, the force says it has as many as 110 horses and 117 officers as part of its Mounted branch who undertake a much more varied role in the capital.

Their responsibilities include high visibility patrols, undertaking community engagement,  and specialising in crowd control at sporting events, demonstrations, public order events, and state ceremonial occasions such as Trooping the Colour. 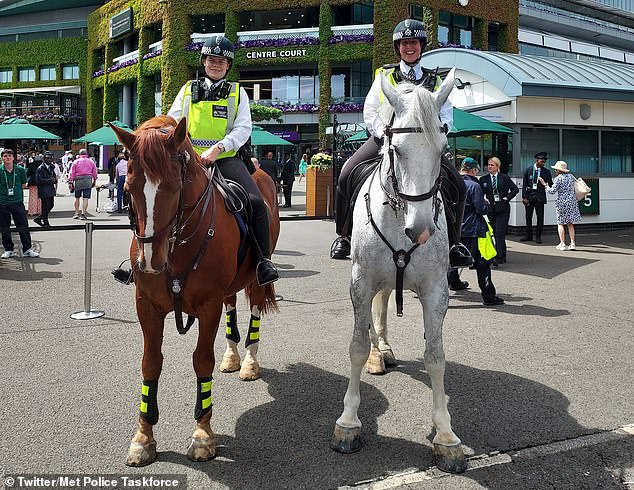 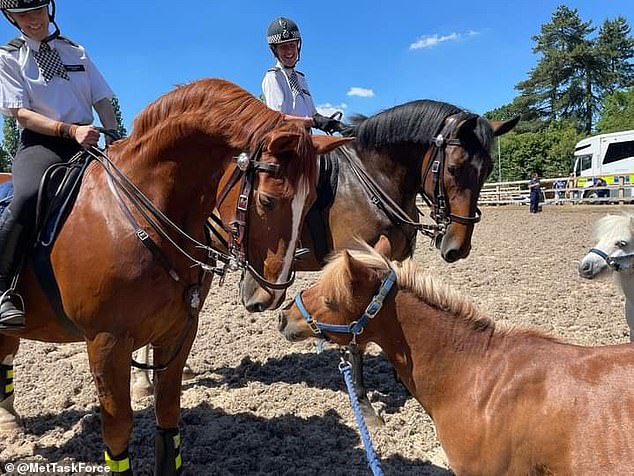 Pictured: PH Sandown (left) and PH Urbane got to show off their mounted skills and meet some furry friends at the Riding for the disabled and REACH charity event in July this year 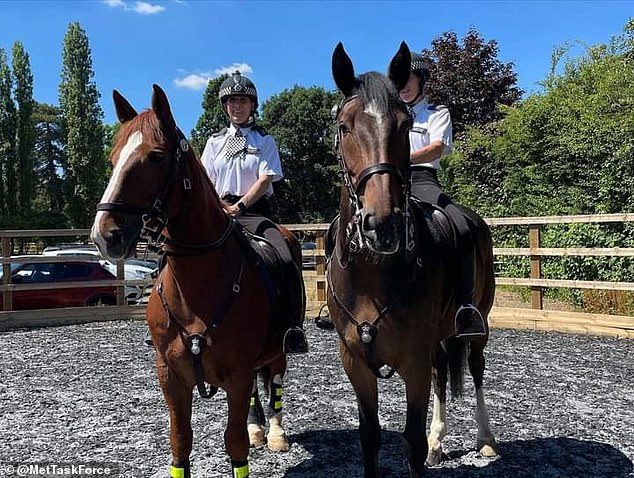 The Met insists that the high vantage point and versatility of Mounted Branch officers make them a ‘valued police resource’.

The force states that a normal tour of duty for a Mounted Branch officer consists of a patrol of three to four hours but adds that this may be extended depending upon the duty they are required to perform.

It is not known how long PH Sandown was on duty before he collapsed and died.

This year’s Notting Hill Carnival was marred by several troubling events, including the stabbing of a young man and the sexual assault of two female police officers.

The festival returned to the streets of West London last weekend following a three-year hiatus forced by coronavirus.

Notting Hill Carnival is the largest street carnival in Europe and an estimated two million people are expected to attend over the course of the Bank Holiday weekend.

The carnival first started in 1966, when about 1,000 people attended, and is famous for its celebration of Afro-Caribbean traditions.

How the horses are chosen

Horses are bought based on their temperament, size and trainability, according to the Metropolitan Police.

Ideally, the animals will be backed and roughly four years old.

Next, the horses are given a four-week trial period.

If this is successful, training begins as a ‘Remount’.

The horses remain at Imber Court throughout the period.

Then, the animals are each allocated to a specially trained police officer.

They will be sent out to one of the Met’s stables, continue their training here.

Most horses are operational within 18 months.

What the horses do

Police Horses join the Mounted Branch team, which has a range of responsibilities.