A brave schoolgirl who survived a terrifying attack that saw her model mother stabbed to death only managed to escape after playing dead when the killer turned on her. 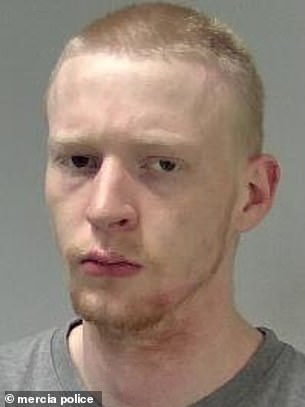 Charles Byrne 25, was jailed for life at Worcester Crown Court after admitting the manslaughter of Christina Rowe and the attempted murder of her child

Musician Charles Byrne, 25, stabbed Christina Rowe, 28, and stuffed her corpse into a suitcase before turning on her young daughter during a fight at her Worcester home.

The girl, who cannot be named for legal reasons, had stirred from her sleep after the argument broke out, and came downstairs where she discovered her mother’s body in a suitcase.

Byrne, who was jailed for life at Worcester Crown Court last week for the gruesome killing, throttled the schoolgirl before smashing her head into the floor.

She only managed to survive the terrifying attack after ‘playing dead’ and paranoid schizophrenic Byrne dumped her in the bath before disposing of Ms Rowe’s body in the River Severn.

The evil killer then returned to Miss Rowe’s home in Worcester with a shovel which he planned to use to bury her daughter.

Mercifully, when he discovered the little girl had survived he fled the property, saying to himself he would ‘rather go to jail’, and was arrested days later following a manhunt.

Miss Rowe’s grief-stricken family have revealed her daughter has been left traumatised by the ordeal and was diagnosed with post-traumatic stress disorder (PTSD).

A family member said: ‘She suffers from PTSD and vivid nightmares and is scared that someone will hurt her again.

‘She sobs and sobs, such raw sobs. It has caused her immense trauma and she no longer trusts men.’

A court heard Byrne met the mother-of-one 14 months earlier on Tinder and moved into her home, only to leave months later when the relationship fell apart.

But in February last year he returned to the Worcester property and talked his way inside, where he then attacked Miss Rowe before placing her body in the suitcase he had brought with him.

A heart-rending victim impact statement from her foster carer described how the child wanted to become a doctor so she could help her mother to recover.

The court heard cannabis user Byrne then left the property to dispose of Miss Rowe’s body but returned to discover her daughter was still alive – and decided to spare her.

At the time of the attack, Byrne lived nearby with his mother, who worked as a director of a cathedral community outreach programme.

Mr Burrows said Byrne – who played guitar in a band during his teenage years – had a history of drink and drug abuse. The defendant told doctors he consumed up to one litre of rum a day and smoked ‘strong skunk’ (cannabis) two days before the killing. 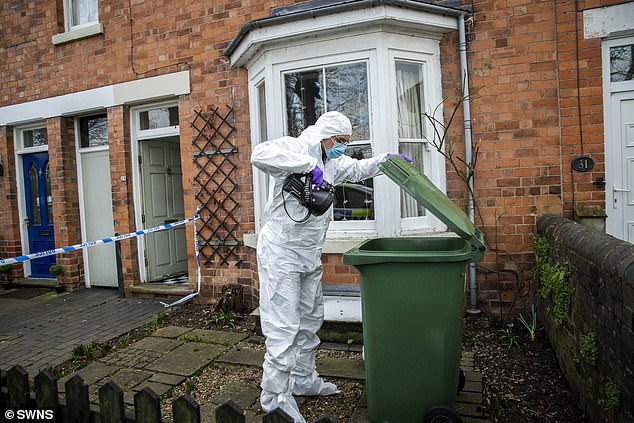 The court heard cannabis user Byrne then left the property to dispose of Miss Rowe’s body but returned to discover her daughter was still alive – and decided to spare her. Pictured: Forensics search a bin as part of the investigation

The child told police: ‘I saw she was in a suitcase lying down.

‘He (Byrne) caught me by the neck and just started strangling me…He put me on the floor and said something about (being) sorry.

‘I think I fell asleep for a while…I woke up again and he was still on me but then he stopped….I think he thought I was probably passed away, so he put me in the bathtub.’

The court heard the child was left locked in the Worcester house but was rescued by police and the landlord of the property after she called her grandfather and said ‘mummy’s dead’.

The court later heard how Byrne met Miss Rowe, a former model from the Philippines, on a dating app but she ended the relationship a few months later.

On the day of the killing he went to Ms Rowe’s home because of his delusional belief that she was a ‘transgender paedophile’ who was ‘harbouring a young child’.

After stabbing her to death, Byrne stamped on her so hard he left a shoe imprint before attempting to murder her daughter who was woken by her screams.

Sentencing Byrne to life with a minimum sentence of 16 years, Mr Justice Pepperall told the defendant he would be sent back to Ashworth high-security hospital for treatment for his paranoid schizophrenia.

He will then be moved to a regular prison if he sufficiently recovers from his condition.