Russian spies set up anti-vaxx demos in Ukraine to sabotage the government, US warns 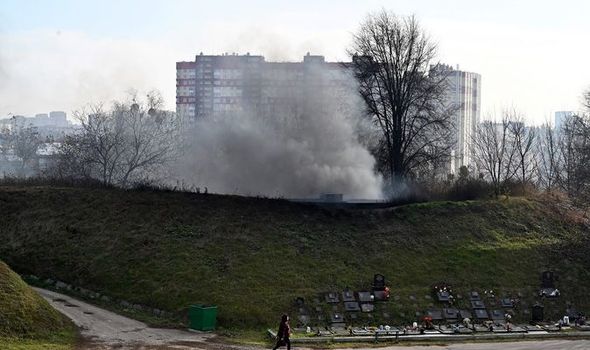 Its intelligence alert says up to 100,000 soldiers are mobilising at the border with artillery, missiles and tanks. Moscow’s spies are also said to be employing devastating “anti-Covid vaccine propaganda demonstrations” in Ukraine to spread harmful lies about the government. Meanwhile, Belarus, backed by Russian president Vladimir Putin, is “weaponising” migrants by pushing them towards Poland. The White House sent warnings to Nato allies about its latest fears from intelligence analysts.

The US has warned that Moscow commanders could be preparing to extend its Ukraine annexation programme – just as it did in 2014.

Seven years ago hundreds of thousands of troops flooded the Crimea, occupying the peninsula, which remains part of Ukraine.

Russia observer Bruce Jones warned: “The Kremlin does not want to return to its previous Soviet status, it wants to exceed it. It views the concluding years of the USSR as shameful and feeble and to be forgotten.”

The UK expert added: “Moscow loathes, hates and resents the West for the outcome of the Cold War, the fall of the USSR, for causing repeated ‘deliberate’ economic crises and worst of all, stationing troops right up to Russia’s border.

“The leadership, since the early 2000s, has been seeking conclusive retribution – whether by cyber, hybrid or information warfare rather than outright conflict.”

Ukraine described the new “wave of destabilisation” coming from Russia”. Ruslan Demenchko, first deputy of national security, accused Moscow of curbing Ukraine’s gas supplies and blocking alternatives amid fears it could impose electricity blackouts. And he said Russian spies are undermining the government by triggering lack of trust in its jab programme. He added: “The efforts undertaken by the Ukrainian authorities in the fight against the pandemic are described as an attack on human rights.”

Meanwhile, Russia has been expanding its weapons in recent years. There are new lethal missiles and flame-throwing tanks capable of wiping out platoons.

Hypersonic missiles reach nine times the speed of sound and are almost impossible to destroy. Thermobaric weapons can be fired from multi-launch rocket systems and have a range of 50 miles. Ukraine has responded by have sending a reinforcement of 8,500 troops to the 300-mile border with Russia. Meanwhile, Belarus was accused by the EU this week of forcing migrants to cross into Poland, which has deployed 15,000 soldiers to bolster the border.

Former intelligence officer Mike Tapp said: “For Putin, this is for one objective: destabilising theWest.

“This activity is a part of his long, thoroughly considered geo-political game. He has manipulated a refugee crisis for Poland – in a bid to destabilise an EU border. He is holding Europe to ransom over gas supplies, causing unrest for democratic governments, and making Biden, Nato and the EU nervous about an invasion into Ukraine.”