Russia loses territory the size of Denmark in Ukraine

Russia has now lost territory the size of Denmark in Ukraine since March – as Putin’s forces continue to suffer heavy losses, fatigue and low morale

The Russian assault on Ukraine has almost ground to a halt amid heavy losses and low morale as it emerged that Putin’s troops have lost territory the size of Denmark since late March.

Russian forces have relinquished an estimated 17,375 square miles of Ukrainian land since March 21, when they withdrew from the outskirts of Kyiv to focus their efforts on the eastern Donbas region, according to the Institute for the Study of War (ISW).

Meanwhile, analysis of troop movements and shifts in the frontlines of eastern and southern Ukraine by the Institute suggests that Russian units have only managed to gain roughly 174 square miles of new territory since July 16, despite committing all their resources to seizing the Donbas.

Russian defence minister Sergei Shoigu yesterday claimed the slowdown in his military’s progress in eastern Ukraine and its loss of 99 per cent of the territory it occupied in March was a ‘conscious decision to avoid civilian casualties’.

But Britain’s defence minister Ben Wallace said yesterday the latest intelligence suggests Russia has lost up to 80,000 troops since crossing the Ukrainian border on February 24, while a top Ukrainian military intelligence official cited reports of morale and physical fatigue in Russian ranks due to Moscow’s ‘exhausted’ resource base. Russian armored vehicles, including tanks and motorized artillery systems seized by Ukrainian forces during conflicts being exhibited at Independence Square and Khreschatyk Street in capital city Kyiv, Ukraine on August 25, 2022 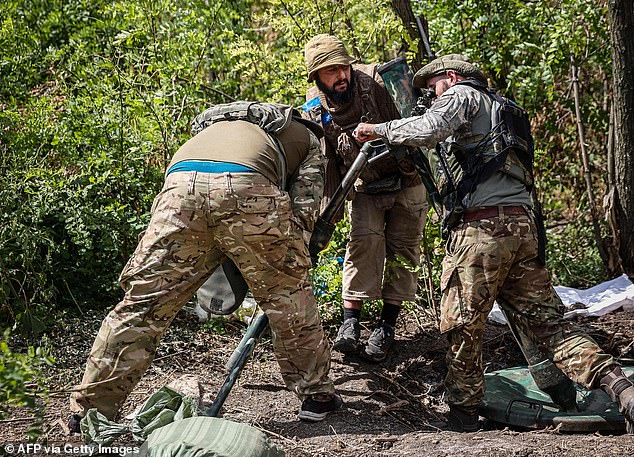 Ukrainian volunteer fighters prepare a mortar launcher at a position along the front line in the Donetsk region on August 22, 2022 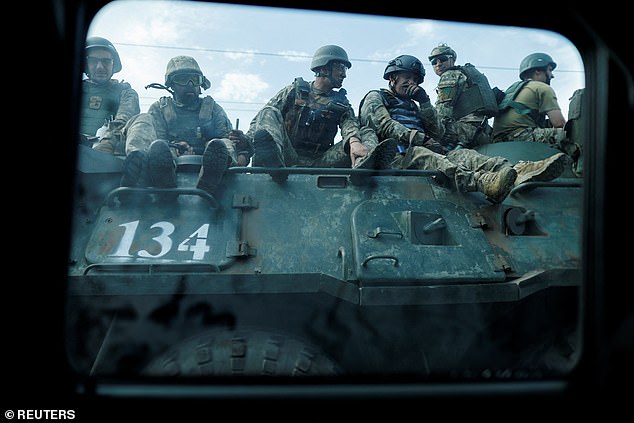 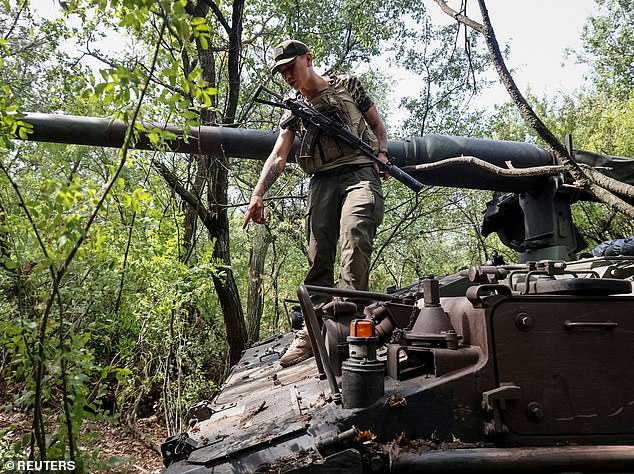 A Ukrainian service member stands at a German self-propelled gun Panzerhaubitze 2000 at the frontline, amid Russia’s attack on Ukraine, in the Donbas region, Ukraine August 20, 2022 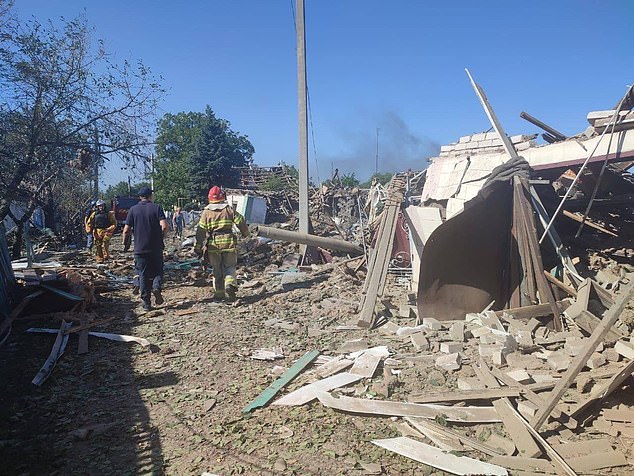 A Russian strike which targeted a train station in Chaplyne, a town of about 3,500 people in the central Dnipropetrovsk region, killed 25 civilians yesterday Despite Shoigu’s parroting of the Russian defence ministry’s unwavering position that it does not target civilians, dozens of Ukrainian towns suffered strikes yesterday as the nation celebrated its independence day.

One particularly brutal strike which targeted a train station in Chaplyne, a town of about 3,500 people in the central Dnipropetrovsk region, killed 25 civilians including an 11-year-old boy buried under the rubble of a house and a 6-year-old who was trapped in a car set ablaze in the explosions.

The deputy head of the Ukrainian presidential office, Kyrylo Tymoshenko, said a total of 31 people sustained injuries in the attack, and the death toll could still rise as rescuers dig through the rubble.

The strike served as a painful reminder that Russia is capable of employing military force that causes civilians to suffer the most and tests Ukraine’s resilience after six months of a grinding war.

Elsewhere in Ukraine, three people were killed in the eastern region of Donetsk on Wednesday and one more was wounded, Gov. Pavlo Kyrylenko said on Telegram, while territory close to Europe’s largest nuclear power plant in Zaporizhzhia was shelled in yet another attack, further stoking fears of a nuclear catastrophe.

But despite the brutality of Russia’s latest strikes, Putin’s war effort in the eastern Donbas region appears to be faltering.

Ukrainian General Staff reported that recent Russian attempts to advance positions in the north of the Donetsk region towards Izyum were thwarted, and a series of Ukrainian counter attacks have pushed Putin’s troops further back into Donetsk.

Similar counterattacks in the southern Mykolaiv and Dnepropetrovsk regions by Ukraine’s armed forces forced their Russian foes back towards the city of Kherson – one of the first Ukrainian cities to be overran and seized by pro-Russian troops earlier in the war which Ukraine is now spoiling to retake.

In a holiday message to the country yesterday, Ukrainian President Volodymyr Zelensky exulted over Ukraine’s success in fending off Moscow’s forces since the invasion. 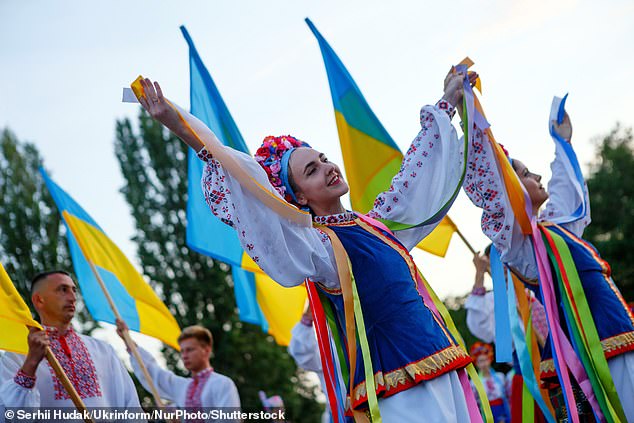 Members of the Zakarpattia Academic Folk Choir perform during the Prayer for Ukraine artistic action on the Independence Day of Ukraine, Uzhhorod, western Ukraine 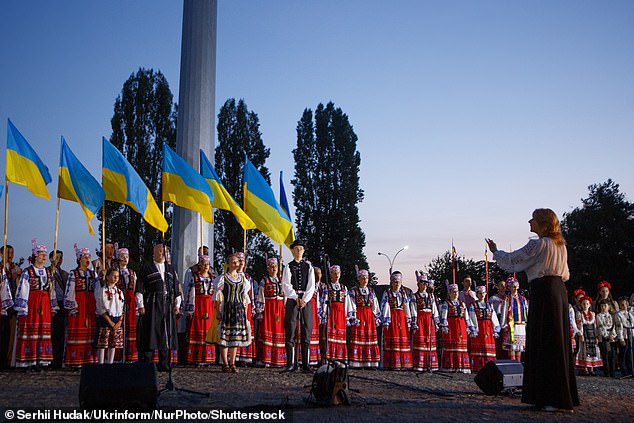 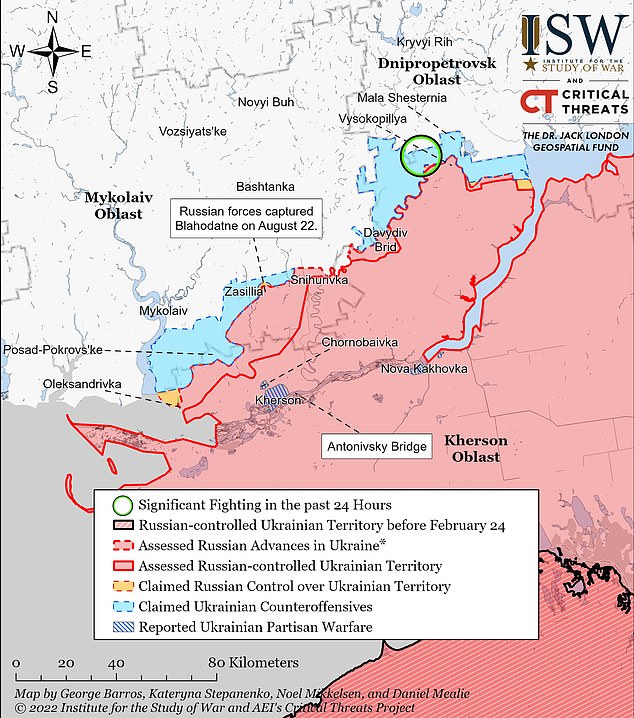 The British prime minister, who leaves office next month, visited the Ukrainian capital as the country commemorated its 1991 independence from the Soviet Union, and shared a warm embrace with Zelensky

Zelensky had earlier pledged that Ukraine would fight ‘until the end’, branding Russian forces ‘terrorists’ and vowing to retake all occupied territory – including Crimea, which was seized from Kyiv in 2014.

Outgoing British Prime Minister Boris Johnson marked Ukraine’s Independence Day with a visit to Kyiv – his third since the war broke out and his last while still in office – and used the opportunity to announce a new £54million package of British military support.

He also held a final round of face-to-face talks with Zelensky, with whom he has grown close, and was awarded the Ukrainian Order of Liberty for leading European support of Ukraine in the face of Russian aggression.

Unveiling the huge support package yesterday, US President Joe Biden said: ‘I know this Independence Day is bittersweet for many Ukrainians as thousands have been killed or wounded, millions have been displaced from their homes, and so many others have fallen victim to Russian atrocities and attacks.

‘But six months of relentless attacks have only strengthened Ukrainians’ pride in themselves, in their country, and in their 31 years of independence.’