Revellers party days before Plan B measures come into force

Santa Claus is hitting the town! Revellers make the most of it while they still can – before new restrictions forcing them to wear masks and show Covid passes in clubs next week

Revellers continued their last-ditch parties on Saturday before Plan B curbs come into force meaning clubbers must now show a Covid pass to gain entry from next week.

In Leeds, party-goers were spotted in their festive finest, wearing Santa-themed headgear and celebrating with work colleagues as they got in their Christmas bashes early before new Covid restrictions come into force.

Long queues were pictured outside packed out bars and boozers in the Yorkshire city for the 15-strong Otley Run pub crawl on Saturday afternoon – ahead of tightened restrictions in a bid to slow the Omicron mutant strain.

The legal requirement in England to wear masks has been extended to more indoor spaces including museums, galleries and community centres.

Friday’s measures were introduced ahead of a return to working from home on Monday and mandatory Covid passports for large venues from Wednesday, as the Government’s Plan B comes into force.

The festive celebrations come as Public Health Scotland urged people to cancel their Christmas parties, in a message which clashes with Boris Johnson’s suggestion that bashes in England should still go ahead despite a call for workers to stay away from offices. 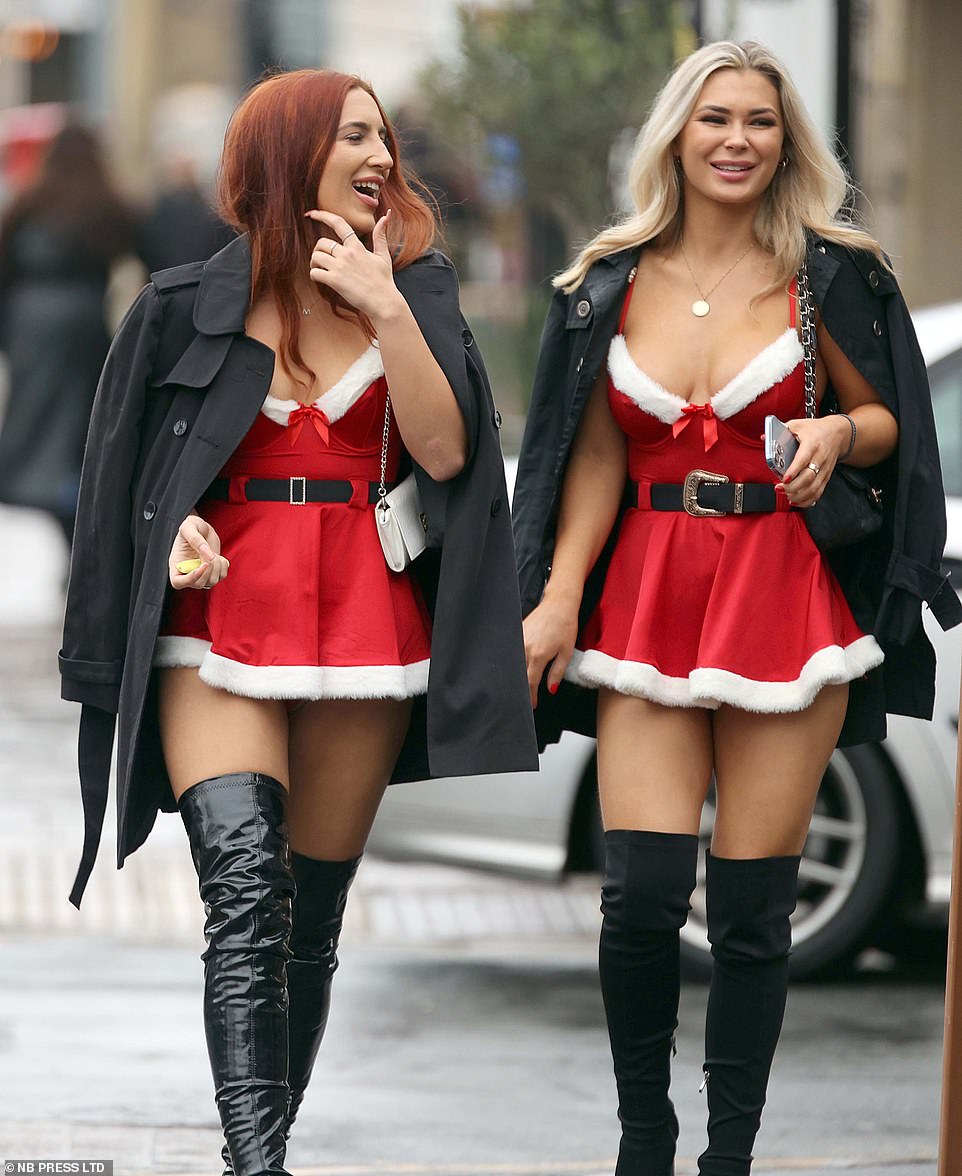 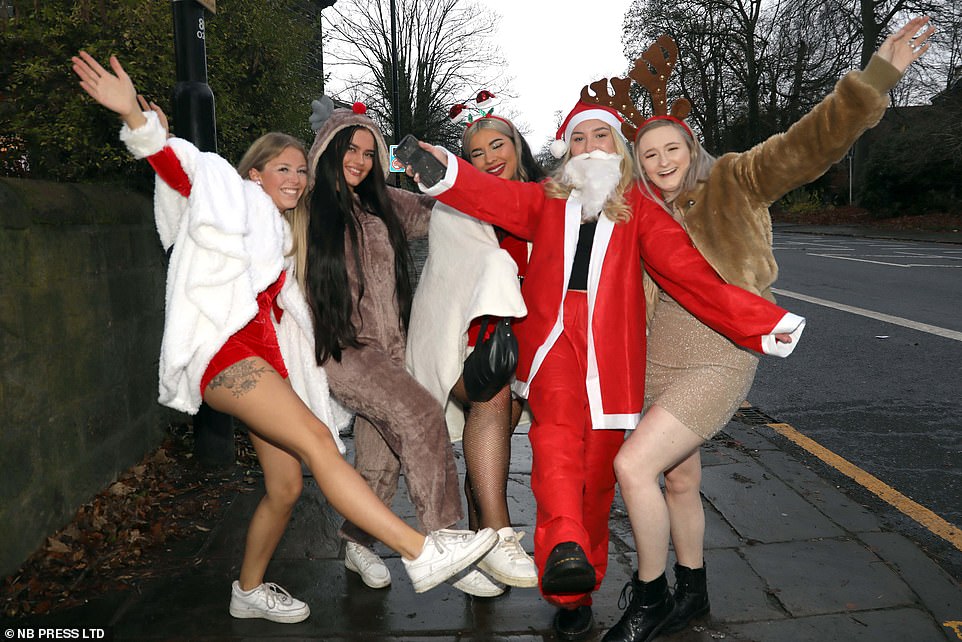 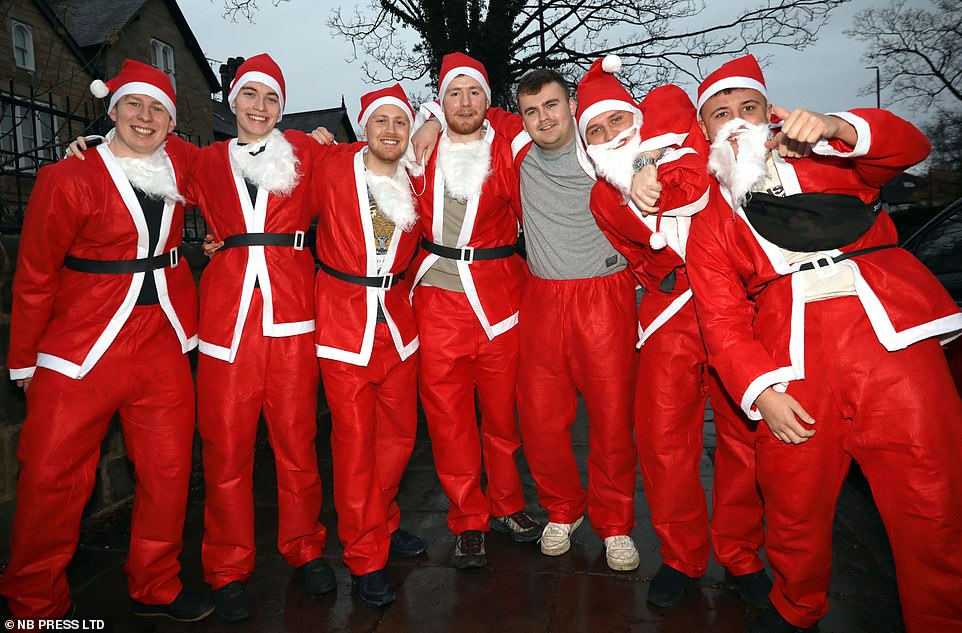 Merrymakers are expected to don their best Christmas-themed outfits for The Otley Run, an infamous 15-strong pub crawl 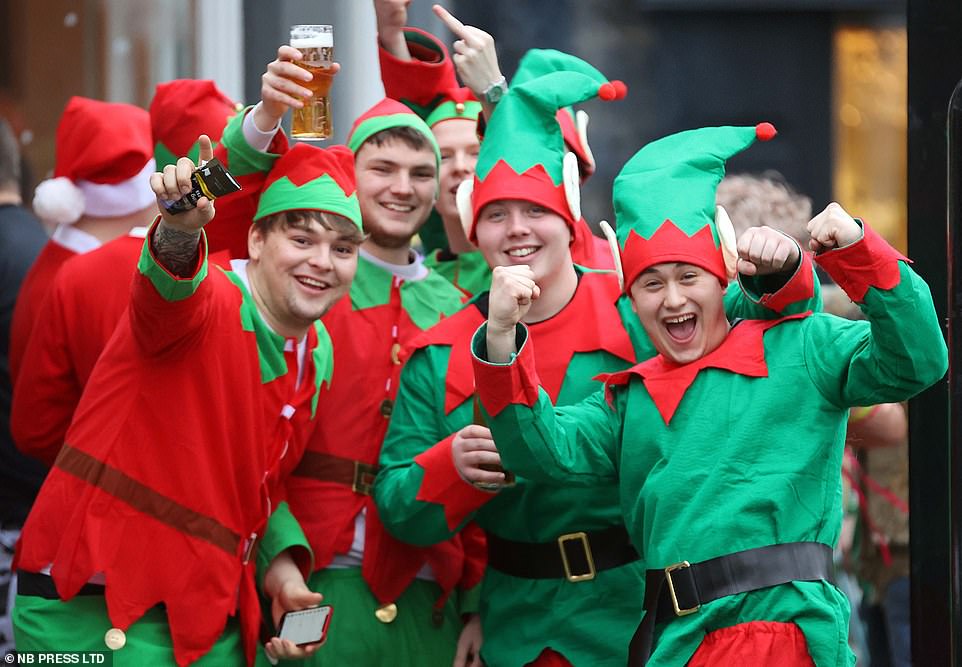 Festive Santas, elves, and even a snowman were seen wandering the route between Woodies in Far Headingley on the outskirts of Leeds to the city centre.

The 1.5mile stretch, consisting of anywhere between 14 and 17 pubs, is considered a rite of passage for students at universities across the city.

Officially starting at Woodies Craft and Ale House in Headingley at the mid-afternoon point and finishing at Dry Dock in the city centre.

Those taking part are expected to have a drink in each bar and pub they go to – spending an average of half an hour in each place – with a variety of sports bars and clubs from old taverns to an actual boat along in the route.

Partygoers who were expecting to have to commute into the office on Monday were given a reprieve by Prime Minister Boris Johnson’s Wednesday announcement, telling people to work from home where possible, allowing those who want to make the most of the weekend some extra recovery time.

But from Wednesday, the NHS Covid pass – obtained by having two vaccines or a negative lateral flow test – will be compulsory to gain access to nightclubs and other large venues where large crowds gather.

Two vaccine doses will be treated as fully-vaccinated but this will be kept under review because of the booster programme.

A negative lateral flow test will also be sufficient under the requirement, which will be rolled out in one week’s time to give businesses time to prepare.

It is not known when they will be lifted, with reports of a Plan C and even stricter measures under consideration by the government as the variant is expected to become dominant in the coming weeks. Mr Johnson said the measures – originally drawn up in September – will be reviewed after Christmas on January 5.

Meanwhile, shoppers swarmed the streets of Leeds, Bristol and Newcastle this afternoon with some cautious to avoid catching Covid amid concerns surrounding the rampant spread of the super mutant Omicron variant.

Thousands flocked to markets and busy town centres to buy gifts on the penultimate Saturday before Christmas day ahead of the new restrictions.

Modelling by the London School of Hygiene and Tropical Medicine (LSHTM) suggests the Omicron strain could cause anywhere from between 25,000 to 75,000 deaths in England over the next five months and more hospitalisations in January than were seen last year.

The researchers — who also sit on the Spi-M SAGE modelling subgroup that advises No10 — said restrictions similar to stage two of the roadmap out of lockdown, which include a ban on indoor socialising at pubs and restaurants, may be needed to stop the NHS becoming overwhelmed.

They suggested the measures should be brought in as Boxing Day to stem the tide of admissions and deaths and added that upping the booster rollout to the Government’s 500,000 per day target will do little to reduce the toll.

Meanwhile Dr Nick Phin, the organisation’s director of public health science, has said revellers should delay their festive gatherings until another time to help in the effort to slow virus spread. 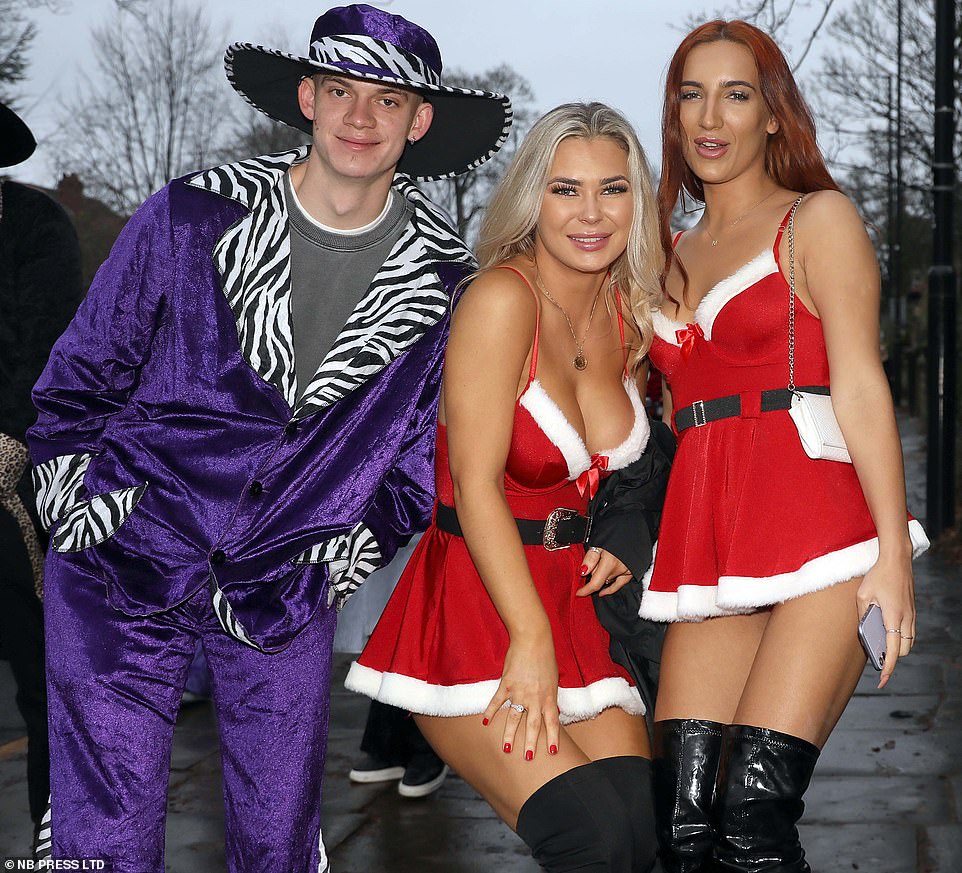 LEEDS: Festive Santas, elves, and even a snowman were seen wandering the route between Woodies in Far Headingley on the outskirts of Leeds to the city centre 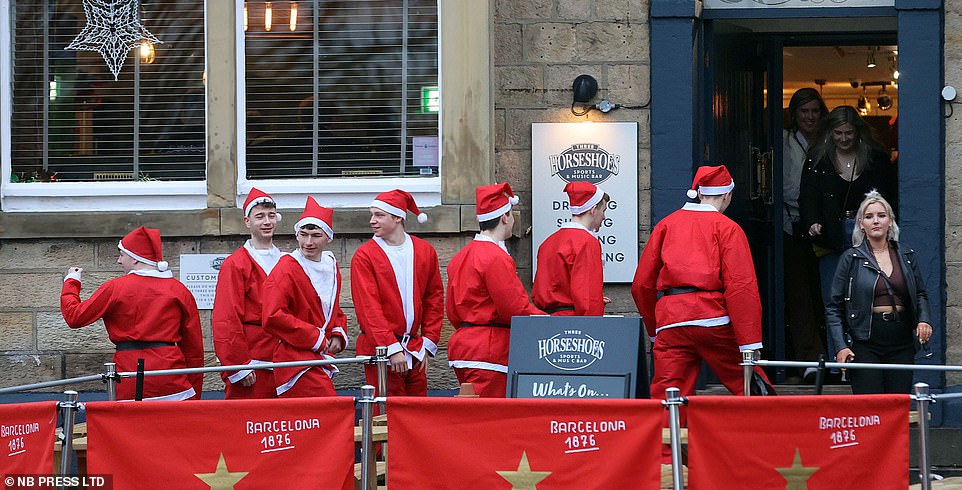 LEEDS: Those taking part are expected to have a drink in each bar and pub they go to – spending an average of half an hour in each place – with a variety of sports bars and clubs from old taverns to an actual boat along in the route 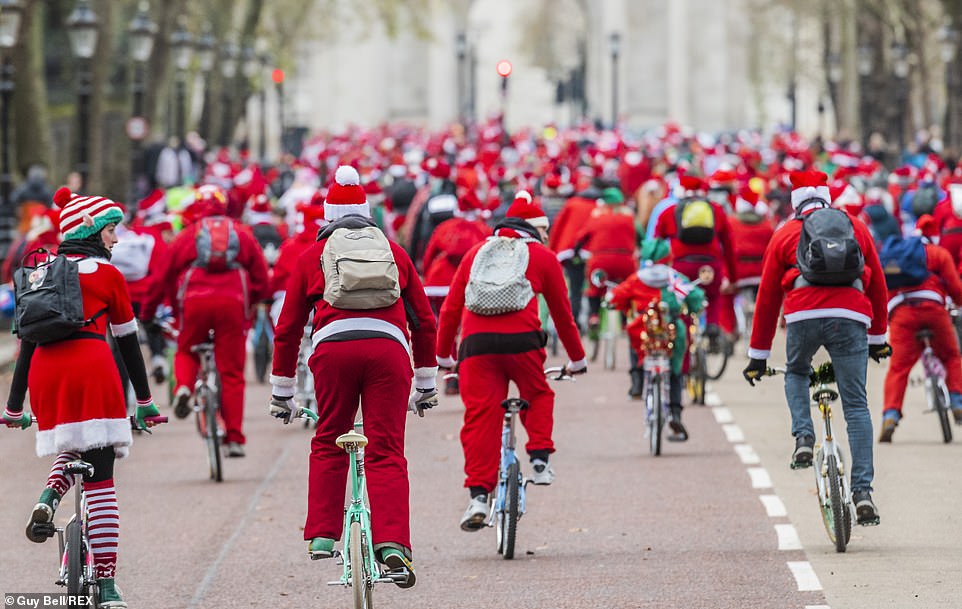 Meanwhile in London, hundreds hopped on their bicycles (above) to raise money for the BMX Life Santa Cruise ride 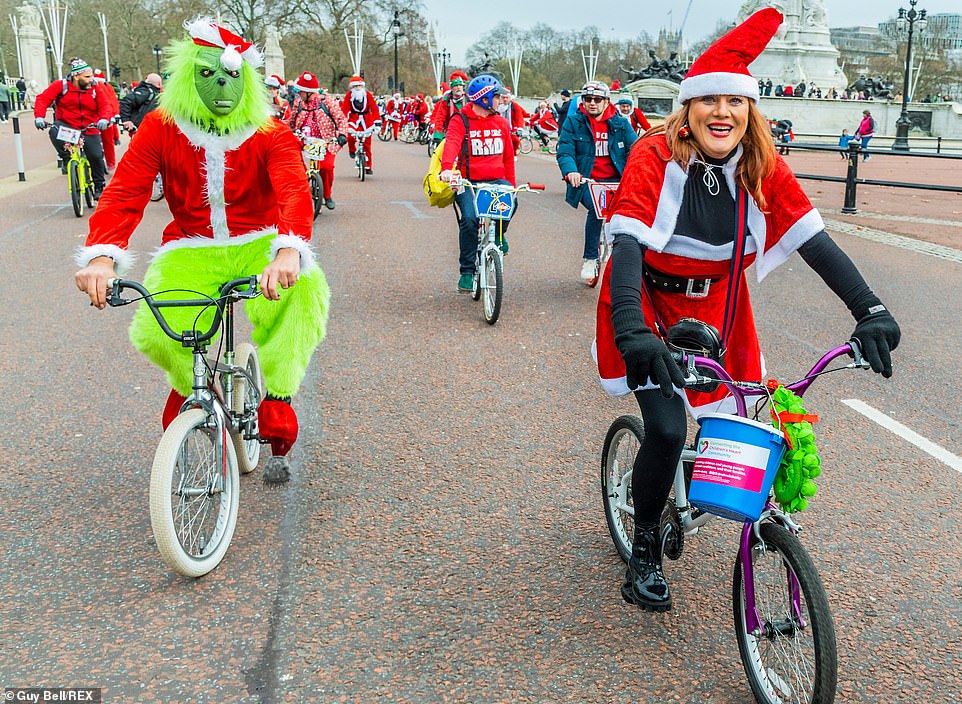 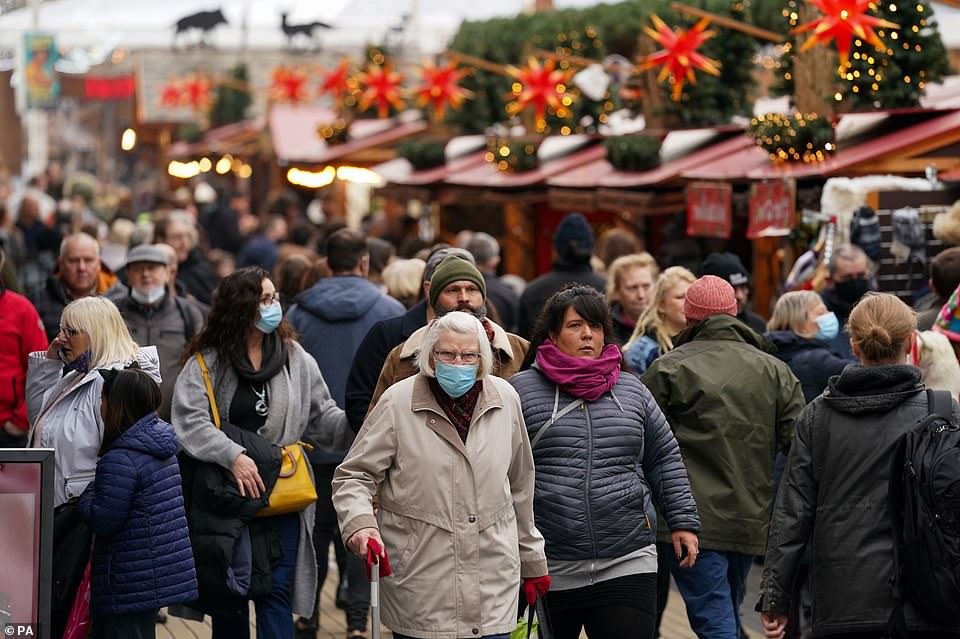 BRISTOL: Shoppers enjoy the Christmas market in Bristol city centre today. Most were seen wearing face masks ahead of the new restrictions coming into force on Monday 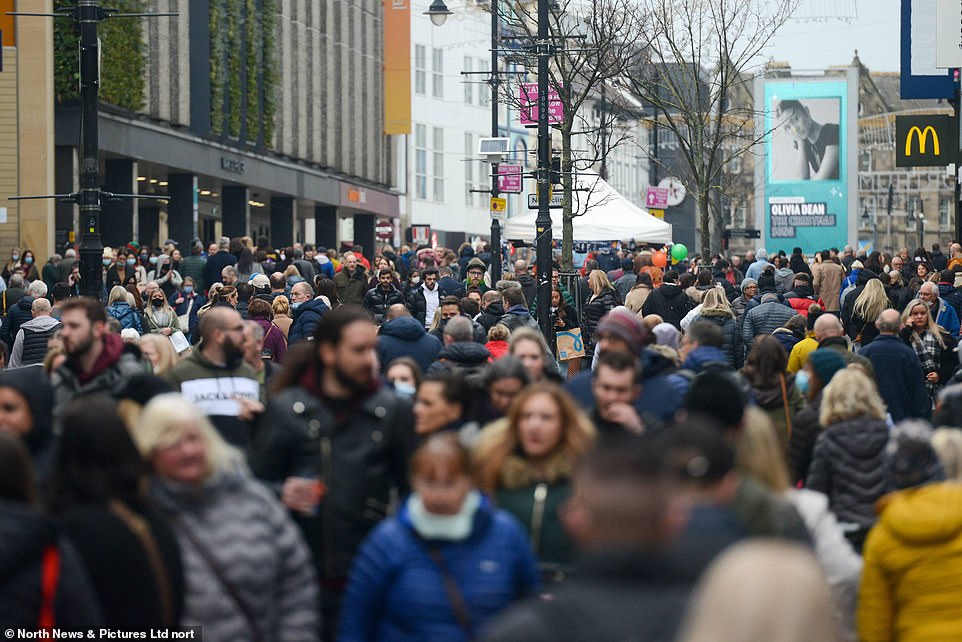 NEWCASTLE: Shoppers walk shoulder-to-shoulder down a busy Northumberland Street in Newcastle this afternoon

Professor John Edmunds, a member of the Scientific Advisory Group for Emergencies (Sage), said cases of the variant will keep rising.

On restrictions, he told a Royal Society of Medicine briefing: ‘I think it’s a necessary evil … it’s very damaging for parts of the economy, the hospitality sector, retail sector in particular – they’re going to be affected.

‘Unfortunately, we have to do it. The rate at which this virus is spreading is doubling every two or three days.’

Sports stadia are also included in regulations published on Thursday evening, but the Department of Health confirmed face coverings will only be mandatory in indoor areas. 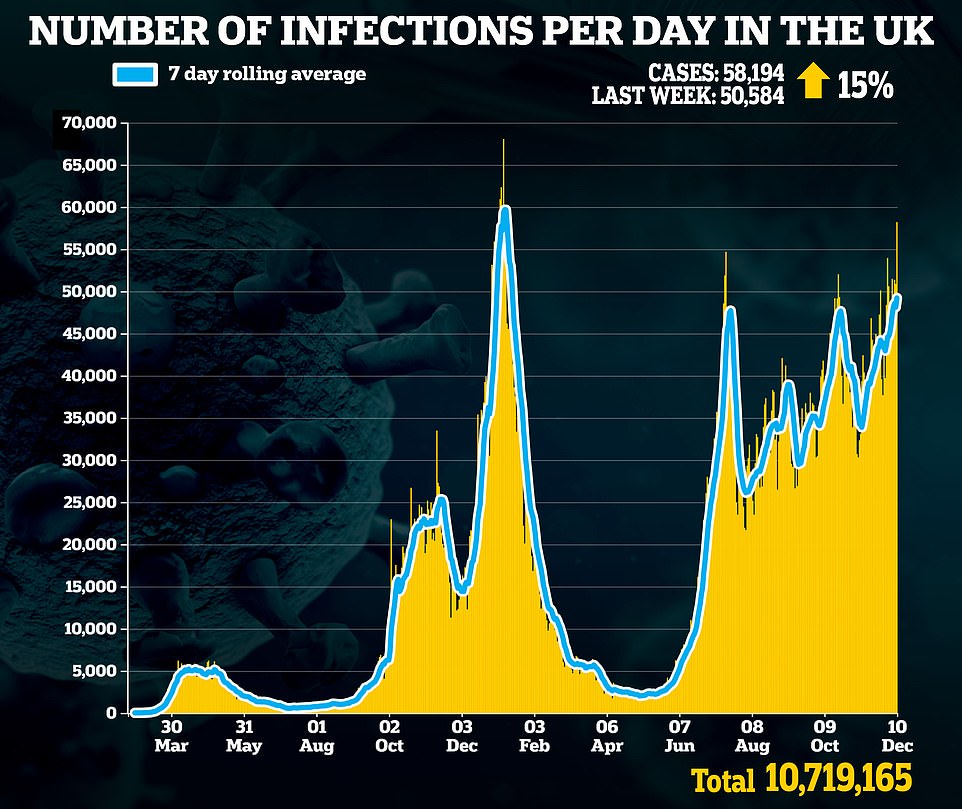 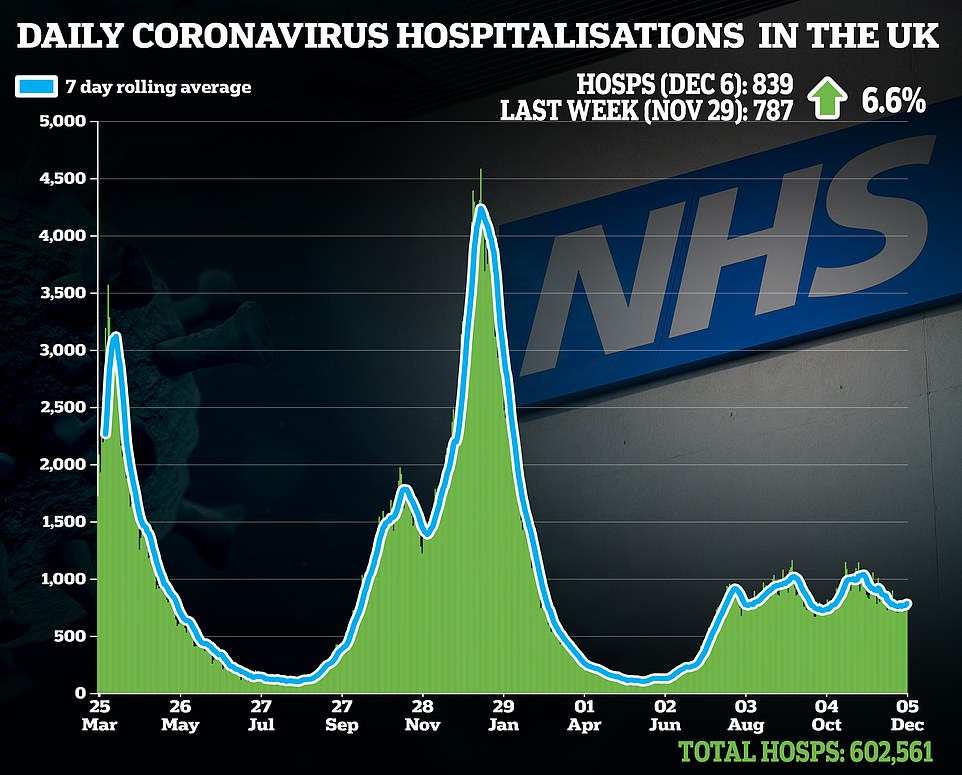 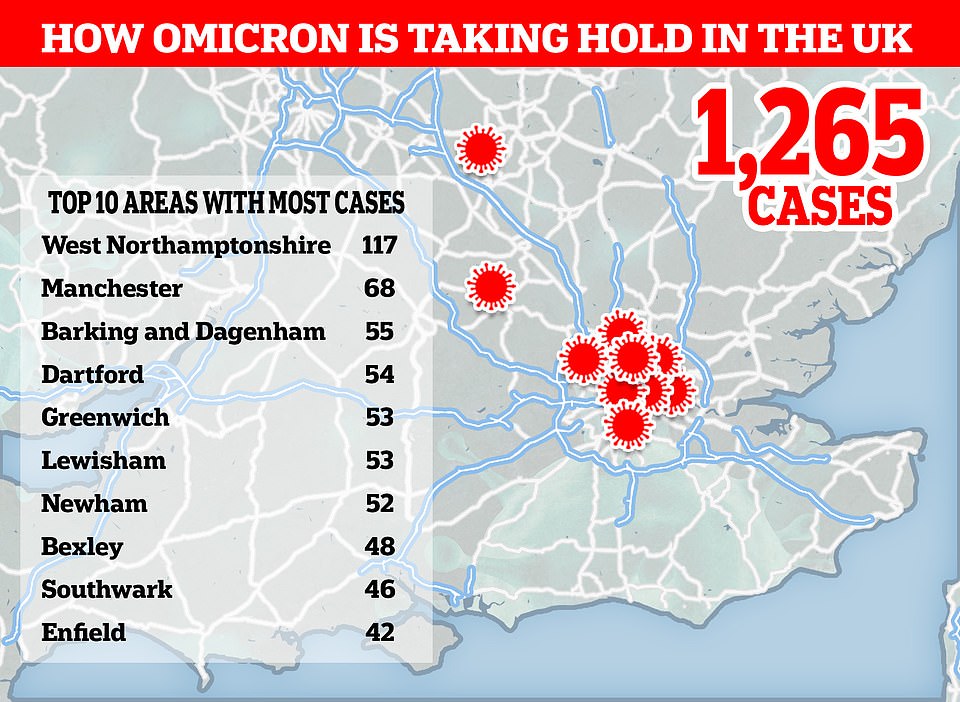 The above map shows the ten areas that have the most confirmed and suspected Omicron cases in England, according to the UK Health Security Agency. West Northamptonshire is the country’s hotspot for the mutant strain, although eight in ten areas on the list are in London

People attending churches or other places of worship will have to wear a face mask – but will be allowed to take it off to sing, making people question whether the face covering will make any difference to the spread of Omicron.

The exemption has created confusion amid concerns that singing creates a higher risk of spreading Covid-19 by making droplets travel further.

The UK’s total number of Omicron cases was 1,898 on Saturday morning, although experts suggest the true number is much higher.

Meanwhile, The Daily Telegraph cites an anonymous Government source as saying it is ‘very likely’ visitors in social care settings will be limited to only three designated visitors as part of plans being considered by ministers.