As England moved to end free coronavirus testing for most of its population, the percentage of positive coronavirus cases has reached record levels in England and Wales, the highest since the Office of National Statistics began surveying the rates in April 2020.

The trend prompted the agency to estimate on Friday that almost 4.4 million people in England and Wales had been infected with the coronavirus in the week ending March 26. The trend in infections in Scotland and Northern Ireland was “less certain,” the ONS said. 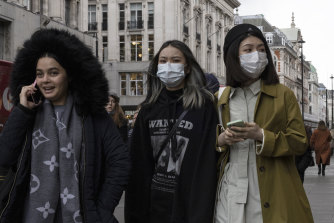 That number of infections indicates that 7.5 per cent of the population of England and Wales, which is almost 60 million, or about 1 in every 13 people tested positive for COVID within that single week.

The agency said that most of the cases were likely to involve the Omicron subvariant known as BA.2, the most transmissible version of the virus yet identified. It has spread faster than the BA.1 variant that was almost entirely responsible for case spikes around the world over the winter.

The estimates are far higher than official counts and underscore the difficulty of tracking the trajectory of the virus when cases are often asymptomatic or revealed by home tests whose results are not officially reported. Britain’s reported case counts are down 7 per cent over the past two weeks, but deaths have risen by 44 per cent over that period.

Dr Stephen Griffin, an associate professor at the University of Leeds School of Medicine, said in an email on Saturday that because the estimates were based on a “genuinely random survey,” they were “always the best picture of prevalence.”

The Office of National Statistics’ coronavirus survey tracks positive infections in the community by randomly testing individuals who might or might not be experiencing symptoms. This excludes people in hospitals, care homes and other institutional settings.

The estimates may diverge even further from official counts shortly. Free coronavirus testing in England ended on Friday as part of the British government’s push to live with the virus. Now only some groups have access to free testing, including health and social care workers and those at risk of serious illness from COVID-19 if they have symptoms. In addition, two of Britain’s routine virus surveys were shut down Friday, and a third was scaled back.

A significant proportion of the British population is unvaccinated or not fully vaccinated: 26 per cent, according to data compiled from government sources by the Our World in Data project at Oxford University. The figure includes those too young to receive doses.

In his email, Griffin criticised the British government’s approach.

“This whole living with COVID isn’t that at all, it’s ignoring it,” Griffin wrote. “The UK is so far along the road ahead and declaring the pandemic is over,” he added, “it doesn’t seem likely that much will change the current direction.”

This article originally appeared in The New York Times.