Patients are ‘at risk’ from record ambulance delays, paramedics have said, as average waiting times for callouts to potentially serious conditions are twice the national standard.

Figures from NHS England show the mean response time to Category 2 calls, which include stroke and other emergencies, was more than 45 minutes in September, compared with a target average of 18 minutes.

The statistics, which were released in October, also show that response times for all categories are the longest since data was first collected in England in April 2018.

There have been problems elsewhere in the UK as well, with the Scottish Police Federation saying officers have driven patients to hospital, and the military brought in to ease strain on the system in Wales.

Figures also show targets are being missed for the most serious – or Category 1 – calls, with the standard of an average of seven minutes missed, with an average response time in England of nine minutes and one second in September.

Richard Webber, of the College of Paramedics and a working paramedic, told the BBC that his colleagues ‘have never before experienced anything like this at this time of the year’. 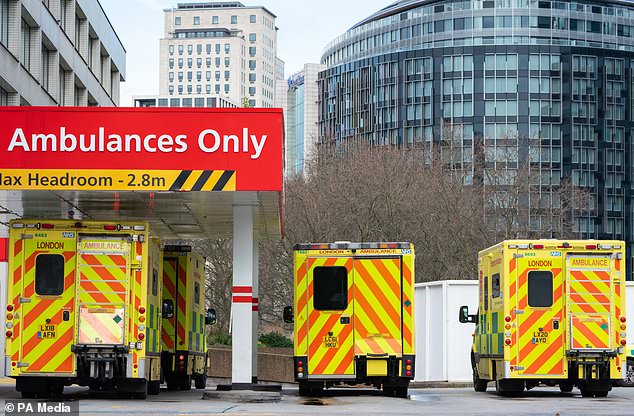 An OAP with a broken hip cried in pain after having to wait eight-and-a-half hours for an ambulance.

Joy Lewis, 76, then had to spend three-and-a-half hours queuing in the back of a vehicle outside casualty before being admitted.

The ambulance came from Wolverhampton, almost an hour’s drive from her home at Ford in Shropshire.

Her son Les Cheley said: ‘There should be more resources. It’s disgusting.

‘There are more people coming into this world so we should be building and expanding our health service, not killing it and selling off our NHS. It’s a sick world – a complete and utter joke.’

Ms Lewis fell in a bedroom at around 6.10am on October 28, and her partner immediately called an ambulance.

Her son, who rushed over, said: ‘She couldn’t move her leg. She was crying in agony and doubled up in pain.

‘At about 10.30am the ambulance control rang again. I said she had broken her hip. They said it would still be about five hours.

He added: ‘Every day services are holding hundreds of 999 calls with no-one to send.

‘The ambulance service is simply not providing the levels of service they should – patients are waiting too long and that is putting them at risk.’

Martin Flaherty, managing director of the Association of Ambulance Chief Executives (AACE), said the hours lost due to delays in waits of more than 60 minutes rose nearly 650% in six months, from 4,700 in April to 35,000 in September.

Speaking in October, he said: ‘AACE remains extremely concerned about the unprecedented levels of hospital handover delays which are occurring across the UK.

‘These have increased significantly since April, resulting in long waits for patients to be admitted to ED and a reduction in our ability to respond to patients in the community.

‘These delays are in part due to the need to maintain social distancing in EDs alongside the unprecedented pressures in the whole urgent and emergency care system at present.

‘We are especially concerned about the numbers of delays of over 60 minutes, which is where we believe most of the harm associated with these delays occurs.’

It came as a poll for the NHS Confederation found that health leaders believe the pressure on the NHS is now at unsustainable levels and patient safety and care are being put at risk by staff shortages.

NHS leaders in England said the health service has reached ‘tipping point’, with nearly nine in 10 (88%) saying the demands on their organisation are unsustainable.

Almost the same number (87%) said a lack of staffing in the NHS as a whole is putting patient safety and care at risk.