Putin will cut all energy supplies if price caps are imposed

The G7 announced plans to impose a price cap on Russian oil exports last week in a move that could also restrict Russia’s ability to secure tankers and insurance. It comes as Ukrainian military chiefs warned Moscow may attack Kyiv again next year. They fear Vladimir Putin will once again use Belarus to launch an assault on the Ukrainian capital.

And Putin – while denying he is using energy as a weapon to hinder Western support for Ukraine -threatened to cut off supplies if price caps are imposed on Russia’s oil and gas exports.

The Russian leader said: “We would only have one thing left to do: as in the famous Russian fairy tale, we would sentence the wolf’s tail to be frozen.

“Those who are trying to impose something on us are in no position today to dictate their will. They should come to their senses.

“Will there be any political decisions that contradict the contracts? Yes, we just won’t fulfil them. We will not supply anything at all if it contradicts our interests. 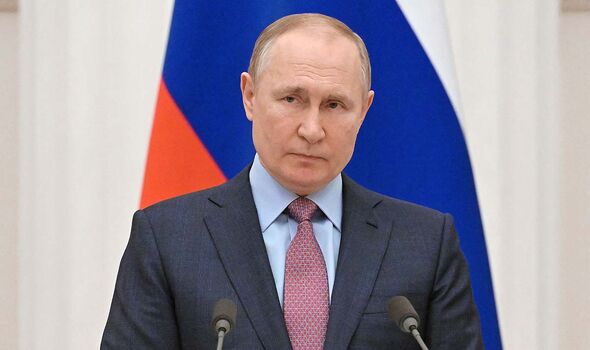 Mr Putin was speaking at an economic forum in Vladivostok, where he said it would be “impossible” to isolate Russia, despite Western sanctions that meant his country was now the most sanctioned country in the world.

The Russian president said: “We have not lost anything and will not lose anything.

“Of course, a certain polarisation is taking place, both in the world and within the country, but I believe that this will only be beneficial, because everything that is unnecessary, harmful and… prevents us from moving forward will be rejected.”

He said Moscow would defy the West’s attempts to push Russia off the global stage and would look to markets in the Middle East and Iran instead.

The Russian president accused the West of “financial and technological aggression” and admitted that, although Russia’s economy was coping with the sanctions, there were some difficulties in some industries and regions.

But Mr Putin said Russia would have no problem selling its vast energy resources around the world, which came as officials said the Russian leader would meet Chinese President Xi Jinping next week at a summit in Uzbekistan.

Hitting back after Russia was largely shunned by Western businesses after the Ukraine invasion, Mr Putin added: “In the spring, many foreign corporations rushed to leave Russia, believing that our country would suffer more from this than others. But now we are seeing how production and jobs in Europe are closing one after another.

“The competitiveness of European enterprises is declining because EU authorities themselves are depriving them of available raw materials, energy resources and sales markets.

“In an attempt to resist the course of history, West countries are undermining the key pillars of the world economic system, built over centuries.”

General Valerii Zaluzhnyi, Commander-in-Chief of the Armed Forces and his deputy Lietenuant General Mykhailo Zabrodskyi warned the war is likely to continue until next year at the earliest.

And they warned Vladimir Putin may order another assault on Kyiv.

The Kremlin initially wanted to seize the Ukrainian capital in three days in a so-called lightning strike.

But the bungled assault saw huge columns of tanks grind to a halt before Ukrainian counter-attacks destroyed them.

General Valerii Zaluzhnyi, Commander-in-Chief of the Armed Forces and his deputy Lieutenant General Mykhailo Zabrodskyi said: “Some operational prospects for the enemy are visible in the Izium direction and the Bakhmut direction.

“The potential ultimate goal of such actions can be to reach the administrative border of Donetsk Region. The prospects for advancing in the Zaporizhzhia direction are even more attractive.

“They will ensure further actions to the north and posing a direct threat of taking control of Zaporizhzhia and Dnipro, which in turn will result in the Ukrainian side losing control over a significant part of Left-Bank Ukraine.

“Returning to the plan to seize Kyiv and the threat of launching the repeated armed hostilities from the territory of Belarus are also not excluded from the agenda.”