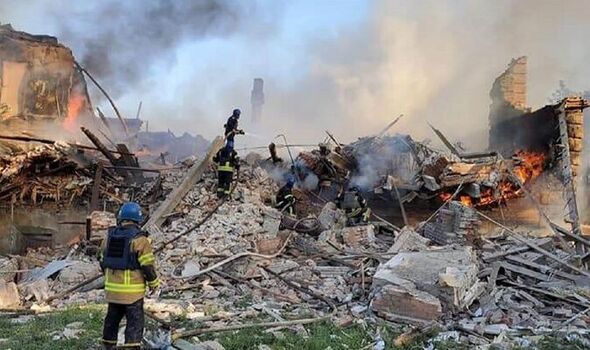 Foreign Secretary LizTruss led the condemnation after a blast wiped out two-thirds of the population of an entire village in the Luhansk region, completely destroying the building. About 90 people had been sheltering in the basement of the school – but only 30 were pulled alive from the rubble. The rest apparently perished.

She insisted the targeting of civilians and infrastructure “amounts to war crimes” and vowed: “We will ensure Putin’s regime is held accountable.”

The bomb from a Russian aircraft on Saturday hit the village of Bilohorivka, near the front line in the Donbas region.

Serhiy Haidai, governor of Luhansk Oblast, said: “The school is destroyed. Considering it was an aircraft bomb, not an artillery shell, the temperature was wild.

“Our emergency workers will try to clear the debris as fast as they can but the chances of people still being alive are small.Yet we hope for the best – maybe someone will stay alive.”

There has so far been no response from the Kremlin.

The explosion shattered the building, which erupted in a blaze that took firefighters three hours to extinguish.

Mr Haidai added the final death toll would be known only when the rubble is cleared.

Bilohorivka is close to the city of Severodonetsk, where Ukraine forces are battling to keep out Russian troops and separatists with heavy fighting reported in the suburbs.

But analysts said the Moscow military is far from having it all its own way, with some notable local fightbacks. Ukraine forces claim to have retaken five villages north-east of Kharkiv.

Russia kept up its barrage of southern Ukraine, with six cruise missiles hitting the major Black Sea port of Odesa.

Yet in another tribute to the unexpectedly effective defence that has sustained the fighting into its 11th week, Ukraine’s military flattened Russian positions on Snake Island in the Black Sea, which was captured in the early days of the war.

Meanwhile, the bombardment continues up the coast in the port city of Mariupol, where Ukrainian fighters remain trapped underground.

Russia and Kyiv yesterday said all elderly people, women and children had been evacuated – as Ukrainian marines vowed to fight to the death at the Azovstal steelworks.

Fully securing Mariupol will allow Russia to build a land bridge to Crimea. It is also a key export hub for Ukraine’s steel, coal and corn. Losing it would be a major blow to what is left of the country’s economy.

The largest European conflict in more than 75 years has developed into a punishing war of attrition that has killed thousands of people, forced millions to flee their homes and destroyed large parts of cities.

Putin is scheduled to preside over a Victory Day parade in Moscow today, celebrating the defeat of the Nazis in the Second World War.