Putin rages against the West in New Year message to his people: Fatigued dictator appears on state TV to accuse Western powers of using Ukraine as a tool to destroy Russia and says he launched invasion to protect its ‘motherland’

An aggressive Vladimir Putin set himself on a collision course with the West in his New Year’s message to his people.

He showed no inkling of compromise over Ukraine claiming he made ‘necessary decisions’ in a catastrophic military conflict which has led to 100,000 deaths on his own side.

But Putin, 70, looked strained and worn as he addressed Russians on television in each of the country’s 11 time zones just before midnight.

His message was also tired, again claiming he was taking on Nazis in Ukraine and that the West wanted to use Ukraine as a tools to destroy Russia. 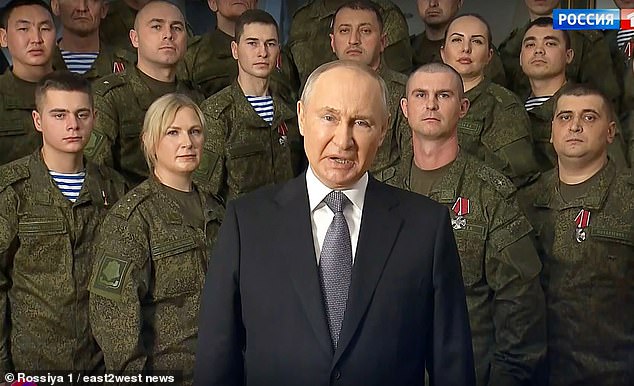 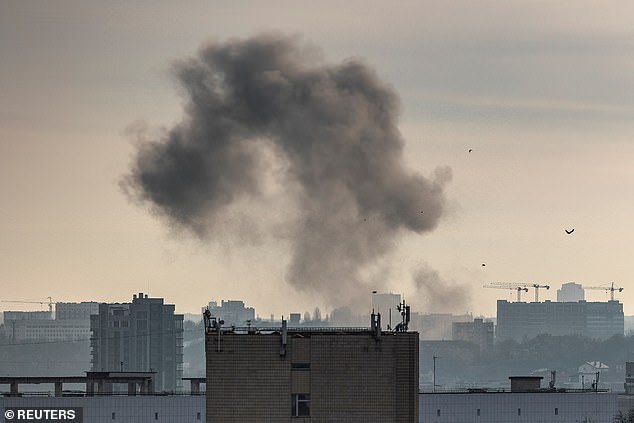 He coughed at several points, and appeared weary and aged in a message broadcast, as his missiles pounded in horrific attacks Ukraine even as people prepared to mark the new year

He coughed at several points, and appeared weary and aged in a message broadcast, as his missiles pounded in horrific attacks Ukraine even as people prepared to mark the new year.

Speaking against a background of 20 servicemen and women in military fatigues, the fatigued dictator addressed from the headquarters of the Southern Military District, close to Ukraine, said his officials.

‘2022 was a year of difficult, necessary decisions, the most important steps towards gaining full sovereignty of the Russian Federation and powerful consolidation of society,’ he said.

‘This year has clearly put everything in its place, separated courage and heroism from betrayal and cowardice.’

Amid rumours of his failing health and fight against cancer, he claimed to be guiding Russians to ‘our common future, our true independence’.

‘This is what we are fighting for, protecting our people on our own territories,’ he said in an appeal for unity against a Western enemy.

‘The main thing is the fate of Russia. Moral, historical truth is on our side. 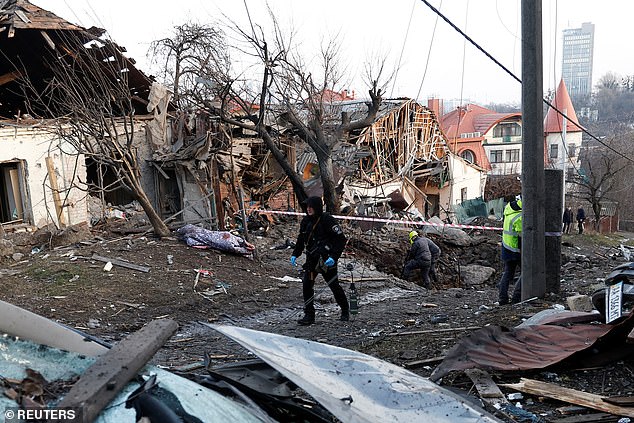 He showed no inkling of compromise over Ukraine claiming he made ‘necessary decisions’ in a catastrophic military conflict which has led to 100,000 deaths on his own side. Pictured: Police officers walk at a site of a Russian missile strike in Kyiv 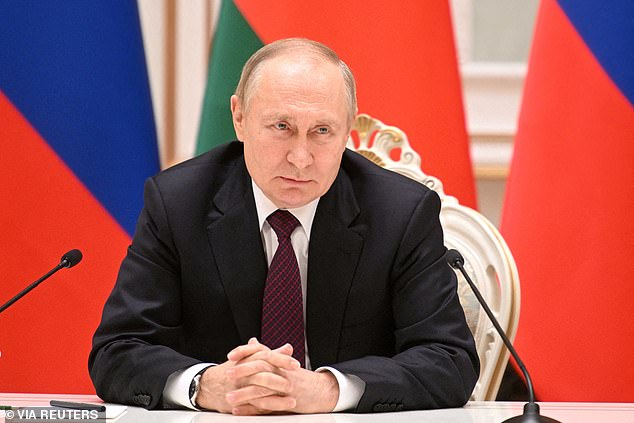 But Putin, 70, looked strained and worn as he addressed Russians on television in each of the country’s 11 time zones just before midnight

‘Western elites have been reassuring us for years of their peaceful intentions, including to resolve the conflict in Donbas.

‘In fact, they encouraged the Nazis in Ukraine.

‘The West lied about peace, but was preparing for aggression.’

He hit out at the sanctions imposed by the West, initially in 2014 after he annexed Crimea from Ukraine.

‘But this year a sanctions war was declared on us, they expected the destruction of the Russian Federation, but this did not happen.

‘We have a margin of safety. We have become an example for other states that are striving for a multipolar world.’

He urged Russians to stick together this new year amid signs of growing dissent.

‘Now is the best time to leave all grievances and misunderstandings, to remind loved ones how important it is to take care of each other.’

He vowed: ‘Together we will overcome all difficulties, we will keep our country great and independent.

‘We will win and go only forward for the sake of our families and Russia.

‘For the sake of the future of our only and beloved homeland.’

Putin launched Ukraine invasion while suffering with ‘megalomania’ brought on by cancer drugs, Western intelligence source claims – as Kremlin admits his health is ‘a matter of state security’

A senior spy official from Denmark told how ‘delusions of grandeur’ and the Kremlin leader’s ‘moon-shaped face’ in early 2022 were signs of the side effects of hormone treatment for the malignancy.

The analysis comes as the Kremlin yesterday admitted that concerns over Putin’s health are now a matter of ‘state security’ amid Covid mutations and emerging flu strains.

This means the Russian leader may retreat even further from public gaze in early 2023 after having cancelled a series of events and appearances in recent months. 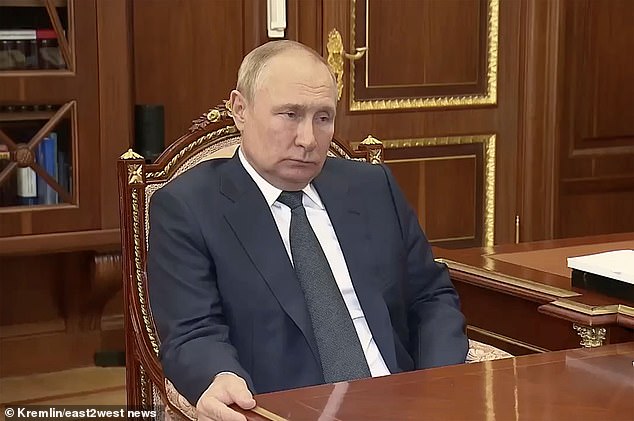 The head of Russian analysis at the Danish Defence Intelligence Service, whose identity was given only as Joakim, said: ‘Delusions of grandeur are one of the known side effects of the type of hormone treatment that he was on…

‘It’s not something I can say for certain, but I think it did affect his decisions when he launched the war in Ukraine.’

The ‘biggest uncertainty’ over Putin was his health – ‘or someone removing him because of his failing health’.

The analysis suggests he has suffered from cancer and was undergoing hormone treatment for it when he started the war, but is not terminally ill.

Putin ‘had a moon-shaped face at the start of the year, which is another known side effect of the same type of hormone treatment’.

Though the Kremlin leader is unlikely to succumb to the disease, Russian power-brokers may seek to install a stronger figure at the helm. 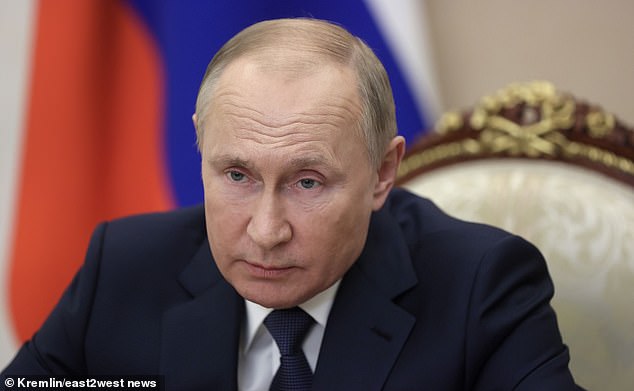 An analysis given by a Danish intelligence officer claimed Putin is suffering from cancer and was undergoing hormone treatment for it when he started the war, but is not terminally ill

‘It’s our firm impression that part of the elite do see they are heading down the wrong track,’ Joakim claimed, but added that Putin is ‘likely’ to stay in power for several years.

‘We don’t see anyone about to depose him. But if we did, the FSB would see it too, and that would probably get sorted very quickly,’ he said.

Putin’s personal decision-making is seen as a key reason for many of the failures of Russian forces on the frontlines.

‘We put a lot of the blame for this on Putin’s shoulders,’ said the senior intelligence official.

‘It wasn’t poor intelligence but Putin’s ideological convictions that led Russian soldiers to believe they would be greeted with flowers,’ reported Berlingske newspaper.

‘It was because of Putin that everything was planned by a narrow circle of people and only shared through the ranks at the very last minute.

‘Because of this, the Russian forces simply did not know what they were supposed to be doing.’

Meanwhile, Putin’s seemingly constant physical discomfort, which sees him gyrate his feet awkwardly while sitting down and grip tables for support – likely comes from a mixture of his ongoing health problems and ‘chronic pain’, Joakim claimed.

‘This is chronic pain that he has suffered from for quite some time now,’ said the official. 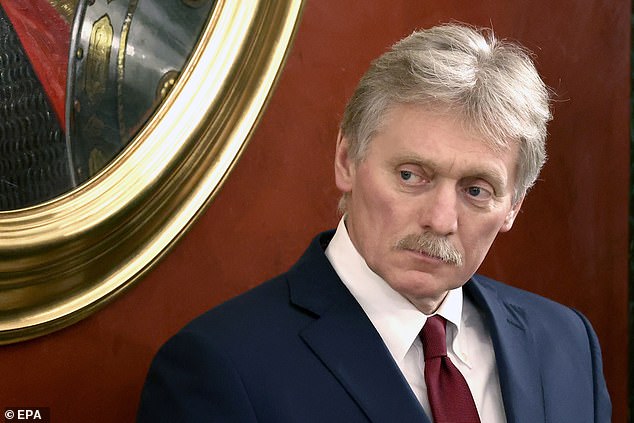 ‘That’s why he tends to sit and grab things tightly. It’s to ease the pain.’

The Kremlin has paved the way for Putin to retreat for health-related reasons soon after his annual prerecorded New Year message to Russian citizens.

‘You see virus mutations, you see strong epidemiological waves of flu of various strains,’ he said.

‘All of this, given the lessons from the pandemic, obliges those responsible for the security of the president and for his health to take precautions, because in such conditions the health of the president is a matter of state security.’

Peskov said there would be no return anytime soon to Putin’s modus operandi before the pandemic, when he regularly held public events and spoke with the media.

‘To be honest, it is unlikely that [communication with journalists] will be quite the same as it used to be before the pandemic in the foreseeable future,’ Peskov said.

‘To expect things to return to what used to be would be a mistake. I would say – no it won’t be [back to the same].

‘But as these waves subside to their lowest points, then it would be possible to communicate in a freer mode.’