Pressure on Guy to answer questions on donor saga

A leading integrity expert believes Matthew Guy’s poor judgment in his treatment of donors could rule him out of winning the next state election, as the Coalition leader avoided media scrutiny on Wednesday following the abrupt resignation of his chief of staff.

Guy did not hold a press conference on Wednesday to answer outstanding questions about the controversy, which saw Mitch Catlin resign after unsuccessfully seeking payments from a party donor in addition to his publicly funded salary. Catlin is likely to be replaced by long-standing Liberal campaigner Simon Frost. 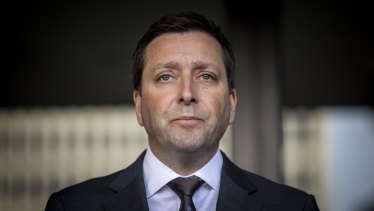 The Coalition leader has not detailed the sequence of events that led to wealthy Liberal donor Jonathan Munz rejecting a request to make payments worth $100,000 to Catlin. Guy said he could not understand why people might view the proposal as a potential corruption risk.

“I don’t … because nothing was signed and nothing was agreed to,” he told Nine News, which approached him as he left Parliament. “There is no question because there was no agreement.”

Catlin also did not answer questions as he left his Armadale home on Wednesday morning, instead packing a suitcase into an associate’s car and driving away.

Dr Colleen Lewis, an honorary professor with the ANU Australian Studies Institute and an associate of the Centre for Public Integrity, said it was doubtful the Coalition would have a credible agenda on political integrity, which is likely to be a crucial issue at the November election.

In an opinion piece in The Age, she wrote that on this occasion and the infamous “lobster with a mobster” affair before the last election, Guy had “displayed abysmal judgment and poor management practices”.

“As voters go to the polls, they will be wondering if he can be trusted to run the state,” Lewis wrote.

She said that “the government’s integrity record is arguably worse than Guy’s” and that “many will be confused about where to place their vote”.

The government continued its attack on Guy on Wednesday, while the Coalition accused Labor of hypocrisy and attempting to deflect from its own integrity problems. Deputy Premier Jacinta Allan said Guy needed to “come clean … about his role in this extraordinary secret arrangement that would have sought to subvert the strict donation laws in our state.” 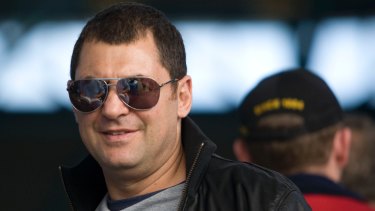 Frost, who last year unsuccessfully contested a position in the Senate, previously ran the Victorian state division of the Liberal Party. Jackson Whiteley, a former staff member at federal Liberal MP Michael Sukkar’s office, was also in contention, but may join the office in another role. 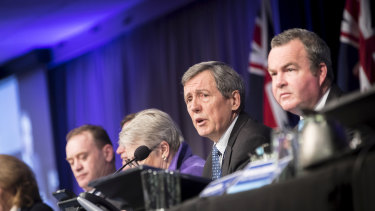 Catlin unsuccessfully sought payments from Munz in addition to his publicly funded salary, according to a leaked email to Guy’s private Hotmail account and a proposed contract obtained by The Age.

“Hey MG. Attached is the proposed agreement between [the donor] and Catchy Media Marketing and Management,” Catlin wrote. “It’s as per the original email agreement between you and me. Can I leave you to forward onto him?”

Guy on Wednesday refused to provide further details about the proposal because it was being assessed by authorities including Victoria Police, the Victorian Electoral Commission (VEC), the Independent Broad-based Anti-corruption Commission (IBAC) and the Victorian Ombudsman.

When questioned on Wednesday about the chain of events, Guy said he was unaware of key details.

In the email reported by The Age, Catlin asked Guy to “forward” the contract to Munz. Guy said he did not do this and was unaware about how the contract was put to Munz. The businessman’s camp claim Catlin forwarded the email “unsolicited”.

“I hadn’t responded to or forwarded any emails. That’s what it comes down to,” Guy said.

The Coalition leader said he could not explain why Munz rejected the arrangement because he did not have any conversations with the donor about the proposal. “I haven’t spoken to either of the two about that and I don’t intend to because nothing was signed,” he said.

On Tuesday, Guy admitted he had discussed with Catlin how to secure more money to employ him, but eventually decided against doing so. He did not answer a question on Wednesday about whether the proposal would have breached donation laws. Additionally, he has not explained what was meant by Catlin when he wrote to Guy saying the contract was “as per the original email agreement between you and me”.

The MP claimed every employee in his office was “entirely” paid out of the regular fund with “not a single amount topped up”. Catlin’s salary increased from the initial level of $140,000 after some staff left the opposition leader’s office and were not replaced, or replaced by lesser-paid staff, a senior Liberal source told The Age.

Guy said on Wednesday that he knew Munz, a plumbing supplies baron and horse racing figure. “I’ve met him a couple of times … but I certainly haven’t had this conversation with him,” he said.

In a written statement, Munz said on Tuesday: “I do not know how many people received this unsolicited and unwanted email, but when I got it, I rejected it out of hand.” Munz declined to comment further on the matter on Wednesday. 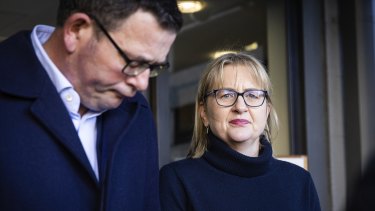 A spokeswoman for the VEC, which on Tuesday announced it was inquiring into whether the proposal was designed to circumvent donation laws, said she would “welcome anyone who wishes to come forward and provide us with information that they have regarding the matters raised.”

“It is difficult to provide a timeframe at this early stage of any investigation, as there are multiple lines of inquiry,” she said.