Portraits of a Duchess: Kate marks 40th with images fit for a queen

London: Kate, the Duchess of Cambridge, has drawn on four generations of queens for landmark photographs to celebrate her 40th birthday, encapsulating the past, present and future of the royal family. 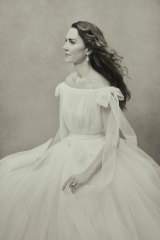 One of three new photographic portraits of Kate, the Duchess of Cambridge, will enter the permanent Collection of the National Portrait Gallery, of which she is patron. Credit:Paolo Roversi/Kensington Palace/AP

The duchess, who marks her milestone birthday on Sunday, has posed for a series of images for the National Portrait Gallery (NPG).

Taking influence from the work of era-defining royal photographers such as Cecil Beaton, the duchess has also channelled her admiration for Victorian photography for a series of three very different images. One, in which Kate is captured in profile, is reminiscent of the young Queen Victoria and shows the modern mother-of-three in regal serenity.

A second, also in sepia tones, is more intimate, seeing her look directly at the camera with a beaming smile in a pose echoing Diana, the late Princess of Wales, in her Mario Testino photoshoots.

The third, in which she wears a vivid red dress with hands in her pockets, channels a younger aura, with earrings loaned to her by none other than the Queen. In other images, the duchess wears the distinctive pearl-drop earrings from Diana. 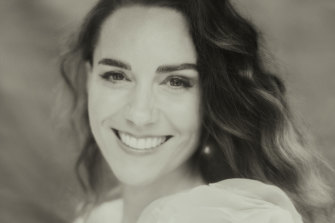 Kate, Duchess of Cambridge, wife to Prince William, second in line to the British throne, turns 40 on Sunday.Credit:Paolo Roversi/Kensington Palace/Getty

The photographs are the most heavily symbolic of any taken of the duchess in her royal life so far.

They are intended to capture the family and creative influences in her life, paying tribute to the taste of the young Queen and her mother Queen Elizabeth, whose image was so often captured by Beaton in a similar style.

They also show the different sides of the duchess herself, from the friendly smile of the accessible mother to the more formal pose of a future Queen.

A source said the duchess worked in collaboration with photographer Paolo Roversi, sharing her clear vision via video call before they met at Kew Gardens for a shoot lasting a few hours. 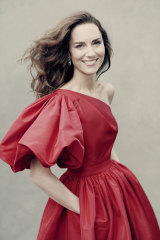 The pictures will now enter the permanent collection at the National Portrait Gallery, of which the duchess is patron. She has previously curated an exhibition of 19th-century photography at the gallery. The NPG will exhibit the pictures throughout the year as part of its “Coming Home” project, which sees photographs of notable public figures displayed in locations that are meaningful to the subject. The duchess’s will go to her home county of Berkshire, her university town of St Andrews and her first marital home of Anglesey.

Roversi, an Italian high-fashion photographer, is a regular contributor to Vogue. One of the veterans of the European photographic scene, he cut his teeth as a young news photographer in the early 70s. He said he approached fashion photography as a news assignment and that his technique was to try and strip away a subject’s masks “until you have something pure left”.

He paid glowing tribute to his latest subject, saying taking the duchess’s portrait “was a true honour for me, and a moment of pure joy”. “I was moved by her warmth and friendly welcome and enchanted by her shining eyes that reflected the loveliness of her soul and her smile showing the generosity of her heart,” he enthused. “I have met a wonderful person… who, with her positive energy, can bring hope to the world.”

The photoshoot took place in November in the Temperate House at Kew Gardens, where the Duke and Duchess of Cambridge have recently spent time with children at an engagement relating to the Earthshot Prize.

The duchess, who studied the history of art at St Andrew’s University, initiated a video call with Roversi to share her photographic inspiration, with reference points from the royal family’s history and beyond.

Cecil Beaton, who took the most famous photographs of the Queen Mother, the young Queen and Princess Margaret, was central to the inspiration, along with Julia Margaret Cameron, the pioneering female photographer of the 19th century.

“It was very much a collaborative process,” said a source. “She is really creative and very much into her photography – she was extremely involved in all of this.”

The dresses are each by Alexander McQueen, the British fashion house. One incorporates silk jacquard, lace, organza and tulle repurposed from previous collections in an effort to improve sustainability.