Paul was kicked off WorkCover. Now his neck can’t be fused with his spine

Until 2014, Paul had been a fit and healthy A-grade electrician. He worked full-time, and loved going to the footy and catching up with his mates. He’d spend the weekends driving his sons to sports practice – they played futsal at a national level. All in all, life was pretty good.

But on July 1 of that year, Paul dislocated his shoulder at work in an accident caused by excessive manual handling and a hazardous, inappropriate standing platform. Paul went to hospital, where a doctor strapped his shoulder and sent him home – without any X-rays or other scans. 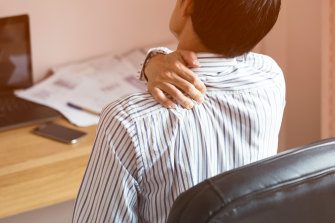 The Victorian union movement knows Paul’s story is just one of thousands.Credit:Shutterstock

Paul had no way of knowing back then that this injury would the harbinger of ongoing pain, trauma and suffering, both physical and psychological, at the feet of a broken workers’ compensation system.

Paul went on WorkCover in 2014 because – as both his employer and doctor confirmed – he could no longer work in his condition.

Six months after his injury, he had almost no movement in his neck and was experiencing chronic headaches. He was sent to an independent medical examiner – a doctor engaged by an insurer to assess an injured worker’s capacity. The examiner conducted a short examination and thought Paul had a brain tumour. When tests revealed that was not the case, the examiner said Paul had arthritis.

Despite Paul’s GP disagreeing with that diagnosis, it was enough to get Paul kicked off WorkCover, leaving his family with no income. Paul struggled to pay for pain relief and bills. Meanwhile, he was being followed by private investigators employed by the insurance company, and was forced to see multiple independent medical examiners, one of whom implied he was faking his symptoms and continued to assert he did not need any WorkCover payments.

It would be a full year after Paul’s workplace injury that he would get an MRI scan, ordered by his own increasingly concerned GP. Far from being arthritis, the MRI revealed Paul’s entire shoulder had fallen from its socket, his muscles had partially torn off the bone (known as a rim rent tear) and he had 3-9 o’clock total labrum tearing. A shoulder specialist told him that his injuries were too far gone and there was nothing they could do.

Right now, Paul’s neck has completely migrated and cannot be fused with his spine. He has been diagnosed with spasmodic torticollis, a rare neurological condition caused by untreated injuries and trauma. A trauma doctor confirmed to Paul that he could never work again. Paul needs to have botox injections every three months just to keep his head upright. Even once he had settled his case with WorkCover, they contacted him soon afterwards and informed him that they would no longer provide him with medication because there was no clinical justification for it – despite Paul’s course of medication having being agreed upon by his GP, neurologists and pain-management specialists.

If the WorkCover system actually worked, Paul would have been diagnosed and treated immediately. Instead, he went on to endure years of unnecessary physical and mental pain as a result of a combative system determined to remove his entitlements.

If the WorkCover system actually worked, the medical examiner would be truly independent, and employed by a scheme whose primary motivation is to centre the care of injured workers, not to make a profit through outsourcing claims management. Instead, Paul was interrogated, surveilled, financially cut off, undermined and retraumatised by a WorkCover scheme with an overt and vested interest in turning a profit.

The treatment Paul received from WorkCover was shameful and avoidable. His physical injuries – left untended for so long – will now be with him for life. He will no longer work. Eight years on, Paul continues to suffer from mental health issues caused by his traumatic experience through the WorkCover system.

The Victorian union movement knows first-hand that Paul’s story is just one of thousands. That’s why we have been campaigning for a workers’ compensation system driven by compassion, integrity, respect for human dignity and transparency – not profits.

And that’s also why right now, we are calling for the urgent activation of all 22 recommendations handed down this month by Peter Rozen, QC, in his independent review into WorkSafe’s management of complex worker compensation claims.