The Reverend Dr Brian Porter, who has died in Melbourne at the age of 83, was a legendary school chaplain and teacher, remembered fondly by many former staff and students of five major Anglican schools. He is remembered too across numerous Melbourne parishes as a fine preacher and wise, insightful pastor. He was also a scholar of Anglican Church history and an author.

Brian Porter was born in Caulfield to Fred and Dorothy Porter, just a few months before the start of World War II. With his father away from home serving in the citizen military forces for most of the war, his mother had to take in a boarder in their small home in Latrobe Street to help her financially. He had three younger sisters – Dawn, Judith and Gayle.

The Anglican Church loomed large in Brian’s boyhood. His family regularly attended St Agnes’ Glen Huntly at the time a thriving parish served by a succession of particularly fine intellectual clergy. Under their guidance, Brian became a sanctuary server, and a devotee of Anglican history and high church Anglican ritual. A vocation to the priesthood was fostered there early. At Caulfield Grammar School, where he experienced the more evangelical side of Anglicanism, his vocation was further encouraged by the priest headmaster, the Reverend Stanley Kurrle.

Excellent teachers at Caulfield Grammar developed Brian’s love of history, literature and drama. Sport, however, was a closed book to him – instead, appropriately, he became a library monitor. He was proud that he was appointed the school’s first non-sporting prefect.

His first career was as a teacher of history and literature, and later, politics. After training at the then Toorak Teachers College, he taught at Lilydale High School and then Melbourne High School, adding part-time study for a bachelor of arts degree at the new Monash University.

His priestly vocation was not to be gainsaid, however. In 1966, he began studying for the ministry at Cuddesdon Theological College, Oxford. At the time, the diocese of Melbourne offered ordinands the opportunity of studying in England; Cuddesdon was then, and remains, one of the premier Church of England training colleges. An Anglophile, Brian leapt at the chance, and always remembered his two years at Cuddesdon as some of the happiest years of his life. Fellow students remained good friends, despite the distance. Whenever he could in the ensuing years, he returned to join some of those friends at reunions in England.

He returned to Melbourne for ordination as a deacon in 1968, and after a brief curacy at Holy Trinity, Kew – not a happy time – he took up a teaching post at The King’s School, Parramatta, at the invitation of his boyhood headmaster, by then the headmaster of King’s. Brian also functioned as an assistant chaplain at the school, a role he continued after his 1971 ordination as a priest. In addition, he became an honorary associate priest at St James’ Church, King Street, in central Sydney. 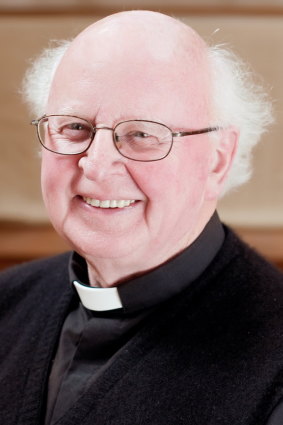 During his time at Cuddesdon, he had been impressed that most of the other students had also done theology degrees at either Oxford or Cambridge, implanting in him a strong desire to do the same. So, in 1973, newly married to Sydney journalist Muriel Carter, whom he had met at St James’ Church, he enrolled in the theology degree at Trinity Hall, Cambridge. Muriel worked as a news reporter on The Cambridge Evening News, at that time an excellent regional daily newspaper.

Returning to Australia in 1975, Brian became first head of history and assistant chaplain, and later chaplain, at Canberra Grammar School. It was in Canberra that Brian and Muriel’s children were born: Patrick, now professor of international security and strategy at Birmingham University in the UK, and Emily, now a Melbourne senior counsel.

Alongside his busy chaplaincy and teaching roles at Canberra Grammar – he always maintained senior level classroom teaching during his chaplaincies – he also assisted in a local parish, taught church history at the Canberra College of Ministry, and edited the college’s journal, St Mark’s Review.

Alongside his busy chaplaincy and classroom work, he had been involved in a range of diocesan roles and committees, a council member of Korowa Anglican Girls School, Glen Iris, and an adjunct lecturer and research fellow at Trinity College Theological School. He edited four books, including the official publication for the diocese of Melbourne’s 150th anniversary in 1997. He authored two books: a collection of his reflections originally published in the Melbourne Grammar School weekly newsletter, and a biography of Frank Woods, archbishop of Melbourne 1957-1977. Woods, whom Brian held in the highest esteem, was the subject of his doctoral thesis. Always a voracious reader of current theological works, Brian particularly loved his 25-year role as book review editor of The Melbourne Anglican newspaper. He had a prodigious capacity for work, yet it never seemed to make him stressed or tired, or lessened his commitment to family and friends, and to offering perceptive pastoral care to any in need.

After leaving the school world, he had five busy years as a locum vicar, caring for Melbourne parishes during vacancies. The onset of Alzheimer’s disease, diagnosed in 2014, brought this ministry to an end. Nevertheless, he continued preaching occasionally in parish churches for several more years, sometimes frankly commenting on his Alzheimer’s diagnosis but also proclaiming his firm belief in the resurrection. Many parishioners were deeply moved by his honest facing of his illness.

Brian’s ordained ministry did not conclude when deteriorating health led to his admission to Karana, the Baptcare Residential Community in Kew, in 2020. There, at the Sunday chapel services, he always gave the final blessing, thanks to the wonderful assistance and encouragement of the Karana chaplain, Samantha Lo.

His theological stance was progressive and generous. He was a strong advocate of the ordination of women – women clergy, including two bishops, were prominent at his funeral – and was a passionate promoter of same-sex marriage and the full inclusion of LGBTIQA+ people in the life and ministry of the church. He believed strongly that god is a god of love, and frequently, at weddings and funerals, quoted a favourite line from the Philip Larkin poem, An Arundel Tomb: “What will survive of us is love.”

In the many condolence messages his family has received, friends and colleagues have most often recalled his great capacity for friendship, and the depth and breadth of his pastoral care. As one put it, “he had a great heart for those that other people dismissed”. Another said that he instinctively recognised school students who were unsettled, bullied or troubled, and went out of his way to help them develop self-esteem. Certainly, what has survived of Brian is love.

Fittingly, his favourite, much-used prayer was one he wrote himself: “God of love, make us so mindful of the love from whence we came, that we may know more the love to which we go, and in this love abounding, daily abide.”

Brian is survived by Muriel, Patrick and Emily, his grandchildren Fergus, Molly, Hugh and Eleanor, and his sisters Dawn and Judith.