Partygate police hand out fines for a THIRD Whitehall bash

Partygate police have handed out fines for a third Whitehall bash – targeting revellers who were at a leaving do for an official who wrote lockdown rules.

The send-off for Kate Josephs, the director-general of the Cabinet Office’s Covid-19 taskforce, is the latest said to be subject to penalties.

It was held at the Cabinet Office on December 17, 2020, when Londoners were banned from socialising indoors with anyone outside their household or support bubble.

Ms Josephs, now chief executive of Sheffield City Council, issued an apology when the event was first reported in January, but refused to comment on the claims in the Daily Telegraph today. It is not clear whether she personally has received a penalty.

Ms Josephs was responsible for drafting the wide-ranging restrictions during the early months of the pandemic.

The development will heighten the anxiety in Downing Street as Boris Johnson waits to hear whether he will be fined over any lockdown breaches.

The police probe is continuing, with only an initial batch of 20 FPNs referred to be sent out so far. 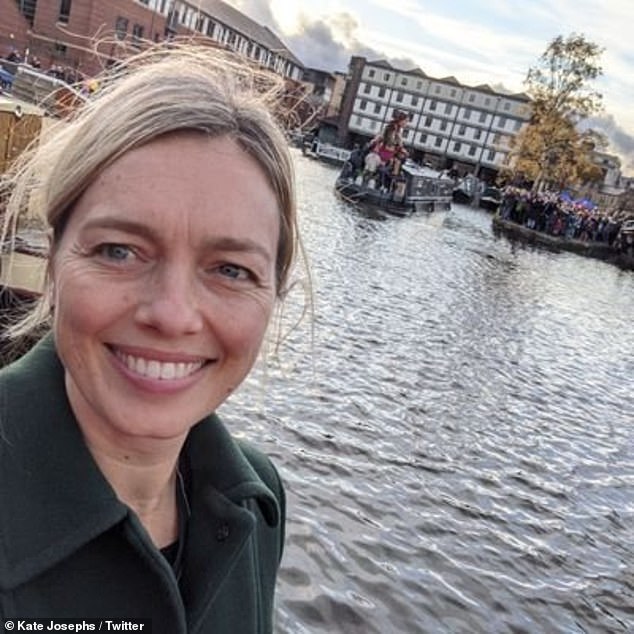 The December 2020 send-off for Kate Josephs, the director-general of the Cabinet Office’s Covid-19 taskforce, is the latest said to be subject to fines 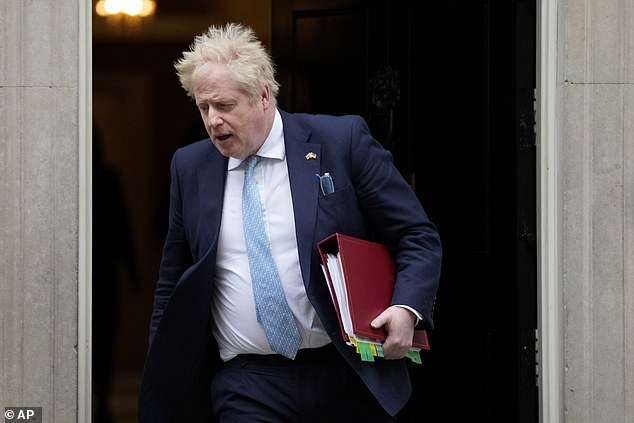 A former Whitehall ethics chief yesterday become the first to openly admit paying a Partygate fine as she apologised for her ‘error in judgment’.

In a statement, Helen MacNamara said she has settled a penalty she was issued, believed to be in connection with a separate leaving do held in the Cabinet Office on June 18 2020.

She said: ‘I am sorry for the error of judgement I have shown. I have accepted and paid the fixed penalty notice.’

Downing Street aides are said to have been issued with fines over a notorious rowdy leaving do on the eve of Prince Philip’s funeral.

The police action over the event in No10 in April 2021 marks the closest the probe has come yet to the PM  – he was not at the event itself.

Ms MacNamara, who was Deputy Cabinet Secretary before leaving the civil service last year, was handed a £50 fine after what was branded a ‘raucous’  karaoke party where there was a drunken brawl.

One Government aide hit out at Ms MacNamara telling MailOnline she had ‘slapped the rules as firmly as she could on others’ but ignored them herself.

The Met has been sending notifications to individuals via email after declaring that it was issuing an initial batch of 20 FPNs. 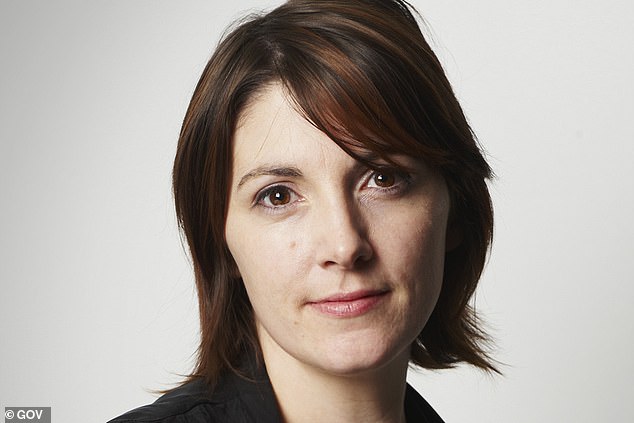 In one of the most damaging episodes in the Partygate scandal, Downing Street staff were said to have gathered after work for two separate events on April 16 2021, as the country was in mourning after the death of the Duke of Edinburgh.

One was for former No10 director of communications James Slack and the second for a photographer.

The two bashes later appeared to merge, with officials said to have brought in booze in a suitcase and partied until the early hours of the morning.

Takeaway pizzas were reported to have been ordered in and some of the revellers were said to have used a slide and a swing belonging to Mr Johnson’s son Wilfred – with claims the latter was broken.

The following day, the Queen sat alone – socially distanced from her family – as she said goodbye to her husband.

No 10 previously said an apology had been extended to Buckingham Palace. Mr Slack said in January that he was ‘deeply sorry’ for the ‘anger and hurt’ caused by the leaving do, saying it ‘should not have happened at the time that it did’. It is not known whether he has been fined.

Which bashes are being probed by the police?

The gatherings which ARE being probed

The revelation came in an email, leaked to ITV, from senior civil servant Martin Reynolds to more than 100 Downing Street employees inviting them to ‘bring your own booze’ for an evening gathering.

The PM has admitted attending the gathering, but previously insisted he believed it was a work event which could ‘technically’ have been within the rules.

Ms Gray’s report revealed that a gathering in the Cabinet Office on this date is being investigated by the police.

The event was apparently held to mark the departure of a Number 10 private secretary.

A Downing Street spokesman admitted staff ‘gathered briefly’ in the Cabinet Room after a meeting. A report from ITV News suggested up to 30 people attended and the PM was presented with a cake.

Number 10 previously said: ‘This is totally untrue. In line with the rules at the time the Prime Minister hosted a small number of family members outside that evening.’

The police probe relates specifically to the gathering in the Cabinet Room.

According to reports at the time, Mr Johnson gave a leaving speech for Lee Cain, his departing director of communications and a close ally of Mr Cummings.

There are allegations that the Prime Minister’s then fiancee hosted parties in their flat, with one such event said to have taken place on November 13 – the night Dominic Cummings departed Number 10.

It has been described as the ‘Winner Takes It All’ party because Abba was allegedly played, and Carrie had a long-running feud with Mr Cummings.

A spokesman for Mrs Johnson has previously called the claim as ‘total nonsense’.

A number of outlets reported that a gathering was held in the Cabinet Office on December 17.

The Times reported that Cabinet Secretary Simon Case attended the party in room 103 of the Cabinet Office, that it had been organised by a private secretary in Mr Case’s team, and that it was included in digital calendars as: ‘Christmas party!’

The Cabinet Office confirmed a quiz took place, but a spokesman said: ‘The Cabinet Secretary played no part in the event, but walked through the team’s office on the way to his own office.’

The former director-general of the Government’s Covid Taskforce said she was ‘truly sorry’ over an evening gathering in the Cabinet Office for her leaving drinks during coronavirus restrictions days before Christmas in 2020.

Kate Josephs, who is now chief executive of Sheffield City Council, said she gathered with colleagues who were in the office that day and added that she was co-operating with the Ms Gray’s probe.

The Sue Gray update said the police are also probing a gathering in Downing Street held to mark the departure of a Number 10 official on December 17.

The claim that kicked off the rule-breaking allegations is that a party was held for Downing Street staff on December 18.

Officials and advisers reportedly made speeches, enjoyed a cheese board, drank together and exchanged Secret Santa gifts, although the PM is not thought to have attended.

Mr Johnson’s spokeswoman, Allegra Stratton, quit after being filmed joking about it with fellow aides at a mock press conference – although it is not clear whether she attended.

A previously unreported gathering is being probed by the police. The Sue Gray update revealed an event in Downing Street for the departure of two Number 10 private secretaries is being looked at by the police.

– April 16, 2021: Drinks and dancing the night before the Duke of Edinburgh’s funeral

The Telegraph reported that advisers and civil servants gathered after work for two separate events on the Friday night.

They were to mark the departure of James Slack, Mr Johnson’s former director of communications, and one of the Prime Minister’s personal photographers.

Mr Slack, who left his Number 10 role to become deputy editor-in-chief of The Sun newspaper, said he was sorry for the ‘anger and hurt’ caused by his leaving do, while Downing Street apologised to the Queen.

The Telegraph quoted a Number 10 spokesman as saying Mr Johnson was not in Downing Street that day and is said to have been at Chequers.

The newspaper reported accounts from witnesses who said alcohol was drunk and guests danced to music, adding that it had been told that around 30 people attended both events combined.

The three events not being investigated

The PM, his wife Carrie, former chief adviser Dominic Cummings, and Mr Johnson’s principal private secretary, Martin Reynolds, were all pictured, in a photograph leaked to The Guardian, sitting around a table in the Number 10 garden, with wine and cheese in front of them.

Some 15 other people were also in the photograph, but the Prime Minister has insisted this was a work meeting, saying: ‘Those were meetings of people at work, talking about work.’

The Mirror reported that the PM gave a farewell speech to an aide at the end of November while the lockdown in England was still in place.

Other reports have said the leaving do was for Cleo Watson, a senior Downing Street aide and ally of Mr Cummings.

The DfE confirmed a social event happened after The Mirror reported that former education secretary Gavin Williamson threw a party and delivered a short speech at an event organised at his department’s Whitehall headquarters.

A spokesman acknowledged that ‘it would have been better not to have gathered in this way at that particular time’.

Is the unlucky 13th being investigated?

The PM appeared on contestants’ screens at the quiz but has insisted he broke no rules.

An image published by the Sunday Mirror showed Mr Johnson flanked by two colleagues, one draped in tinsel and another wearing a Santa hat, in Number 10.

Downing Street admitted Mr Johnson ‘briefly’ attended the quiz after the photographic evidence emerged but insisted it was a virtual event.

The police initially were not investigating this event, but later said they would ‘assess’ it following the emergence of another photograph of the PM.