The heartbroken parents of a man who died of a drugs overdose six years ago have issued a fresh plea to legalise narcotics after the death of a teenager at a nightclub.

Daniel Cowan tragically died in 2016 aged just 29 after being given a dodgy pill, he is believed to have thought was MDMA.

His parents Andrew Cowan, 61, and Margaret Cowan, 63, have been campaigning for drugs to be legalised since his death in a bid to make them safer.

And they said hearing the news of the death of Lucy Hill, 16, had reignited their efforts. 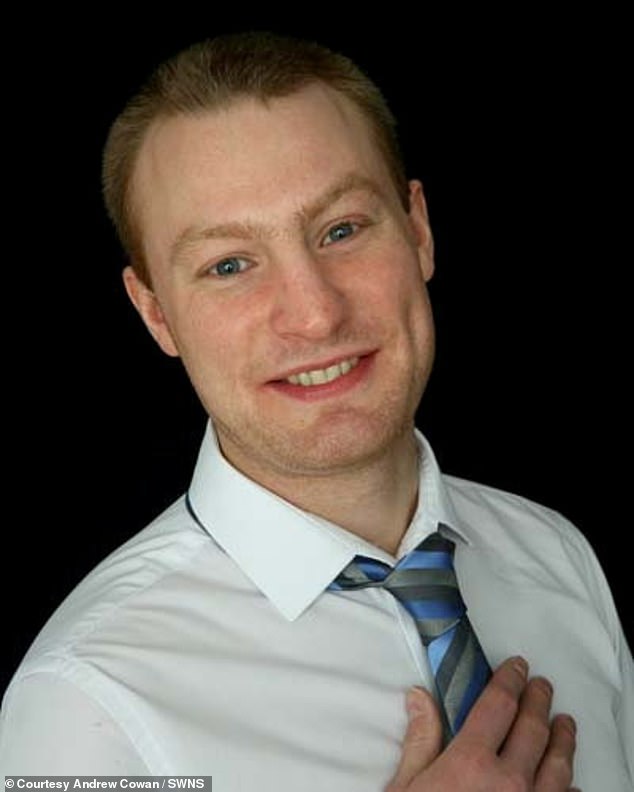 Daniel Cowan, pictured, died in 2016 after taking a dodgy pill he believed was MDMA 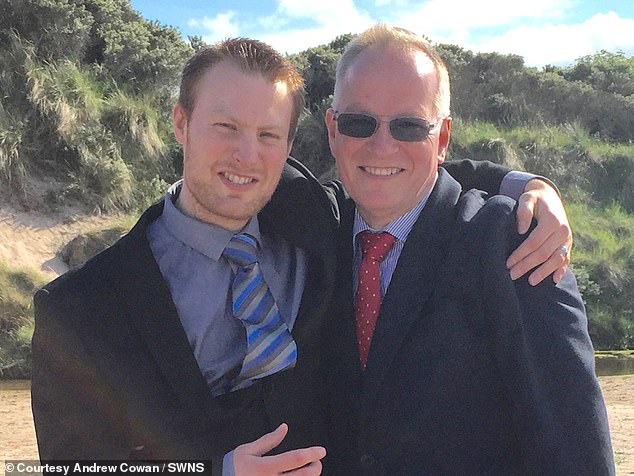 Daniel Cowan, pictured left with his father Andrew, was allegedly given the tablet by a friend, who had purchased it off the so-called ‘dark web’, while partying in Scotland

Lucy is thought to have died after having taken a pill believed to be MDMA during an under-18 event at a nightclub in Exeter earlier this month.

Andrew, from Henley-on-Thames, Berkshire, said: ‘Reading about that poor girl I felt that hammer blow all over again.

‘We need to get the message out about the effect this has on families.

Daniel was allegedly given the tablet by a friend, who had purchased it off the so-called ‘dark web’, while partying in Scotland.

It is thought that the pill was advertised as MDMA.

But Andrew says tests later showed there were also traces of fentanyl, which is sometimes added to heroin to make it more potent.

Since Daniel’s death his parents, who have two other sons, have called for legalisation.

They believe that users could then be confident they are paying for something that is the correct substance and dosage.

They are now part of Anyone’s Child, a group of families whose lives have been wrecked by drugs and are campaigning for change. 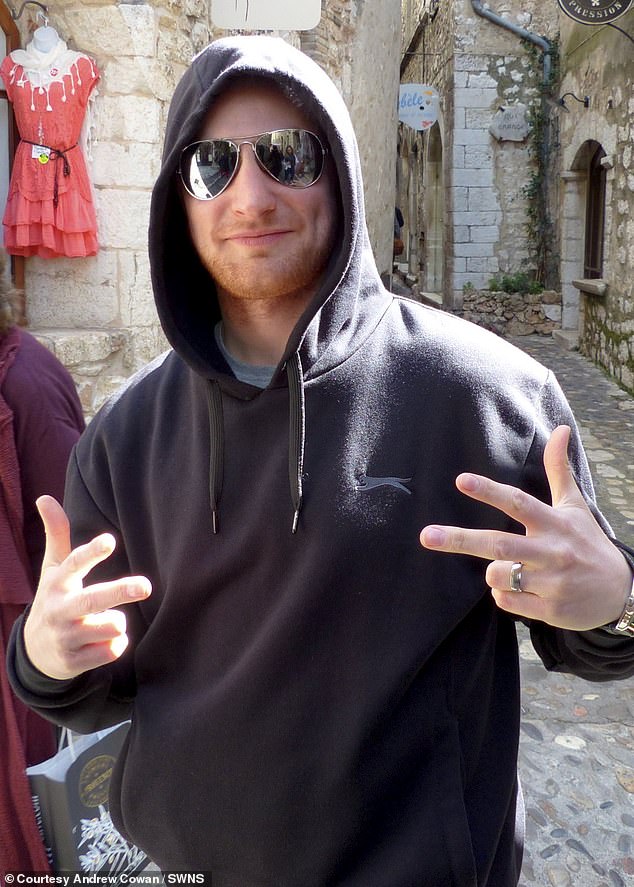 But Daniel’s father Andrew says tests later showed there were also traces of fentanyl, which is sometimes added to heroin to make it more potent. Daniel is pictured 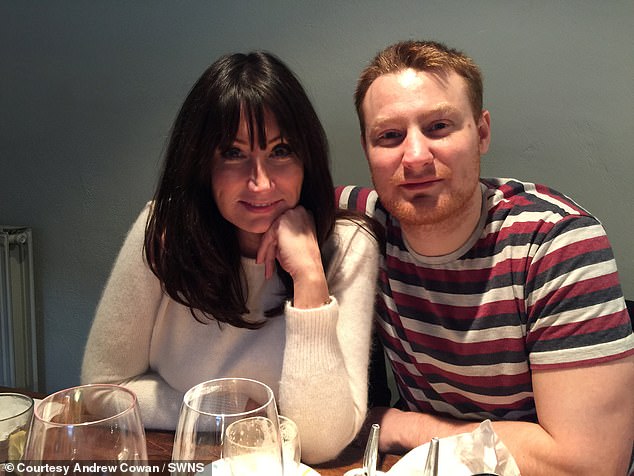 Daniel’s mother Margaret Cowan, pictured left, has been leading calls – along with her husband – to legalise Class A drugs to make them safer

Andrew said of Daniel’s death: ‘As far as we understand it, his friend ordered some pills off the dark web.

‘They thought it was MDMA but shortly after we learned there was heroin in his blood, and a year later police told me the pills contained fentanyl.

Ecstasy, known chemically as MDMA or molly, has been used by clubbers for decades due to its effects in helping keep people awake.

It can come in the form of various pills and often takes about 30 minutes for its long-lasting effects to kick in, which can include feelings of love.

In the US, the jail term can be as severe as 40 years in some states.

In the UK, possession of any form of ecstasy – considered a Class A drug – comes with a potential jail term of up to seven years.

Drug campaigners warn the biggest risk of taking MDMA revolves around the fact that many users are unaware of what is in the substance they are taking.

It can include other drugs, such as PMA, which can be fatal in lower doses than MDMA itself.

In December it was revealed a man from Surrey became a world-record holder after consuming an estimated 40,000 MDMA tablets in his lifetime.

‘At the moment it’s just dark web poison. Pills coming over from China which are pushed by the Italian mafia and flooding Britain’s concerts festivals and nightclubs.

‘It’s all over the place and you can guarantee any young person would be able to get hold of it or has been offered it.

‘Making them legal would make them safer, not easier, to get hold of. We need to realise how many young people are dying.

‘Young people are so influenced by their peer group.

‘I always think about how we can help them, but the truth is the way to keep them safe is for the whole system to change so they can say, “Let’s go to the chemist and get some feelgood tablets”.

‘There they’d get advice and safety warnings, and there’d be a whole interaction – and imagine what that would do to the black market.

‘The pills would be manufactured by pharmaceutical companies and would be as safe as they can be.

‘The only solution is to make it legal and safe.’

Andrew says he wanted to speak out again after the tragic death of Ms Hill earlier this month.

The schoolgirl was on a night out with friends at an under-18s event at Move in Exeter Quay, Devon, when she took a tablet believed to be MDMA, an inquest heard.

Police have confirmed that numerous teenagers attending the event took the same drug, and investigations are ongoing into who supplied it.

Lucy was a pupil at Exmouth Community College. In a statement this week, the school said: ‘Lucy was a kind, considerate, beautiful person. She was very well liked by her peers and the staff who knew her well. 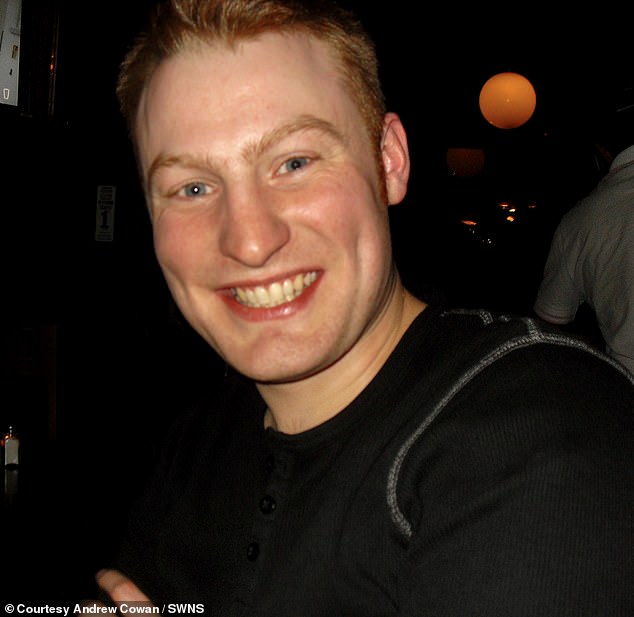 Daniel’s parents were speaking out again about their campaign following the death of a 16-year-old girl, who is thought to have taken MDMA during an under-18 event at a nightclub

‘She was always smiling, looking out for others and many of her friends benefited from her loyalty and care. She was bright, hard working and motivated.

‘She was predicted to perform at the very highest level in her GCSE subjects. She will be greatly missed but has left us all with fond memories of the lovely person that she was.’

Andrew, who is a retired wealth management executive, said he had turned to music since Daniel’s death.

He released the album Fathers and Sons in August, which has already been downloaded more than 1,000 times.

Andy and Daniel feature on the album art. The father said: ‘Music has always been my passion – and Daniel dying opened up the floodgates.

‘I’m bearing my heart on my sleeve when I write a son. It’s so intimate, and so gratifying if it helps someone else.

‘I wrote the songs for the family, but my cousin is a musical genius and helped me record the album because he said it could really help other grieving people. 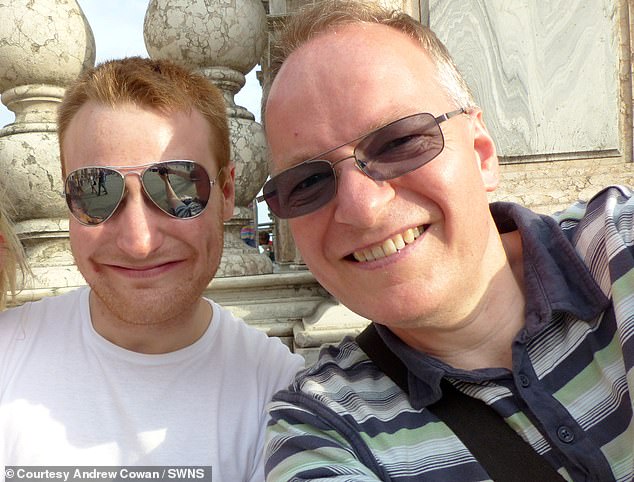 ‘People often assume that we’ll be angry or look for someone to blame, but bizarrely anger is probably the last and least emotion that we’ve ever felt.

‘I’ve always tried to be guided by what Daniel would have wanted – he was a lovely guy who saw the best in everyone.

‘He loved us so deeply and would want us to rebuild our lives and get our joy back and try to stop this happening to other families.

‘Nature owes us nothing and bad things happen. All we can do is use today and tomorrow and the rest of our lives and make it the best we can.

‘[Margaret and I have] been together 42 loving years and we have our remaining two sons and their partners. Some people don’t even have that.’