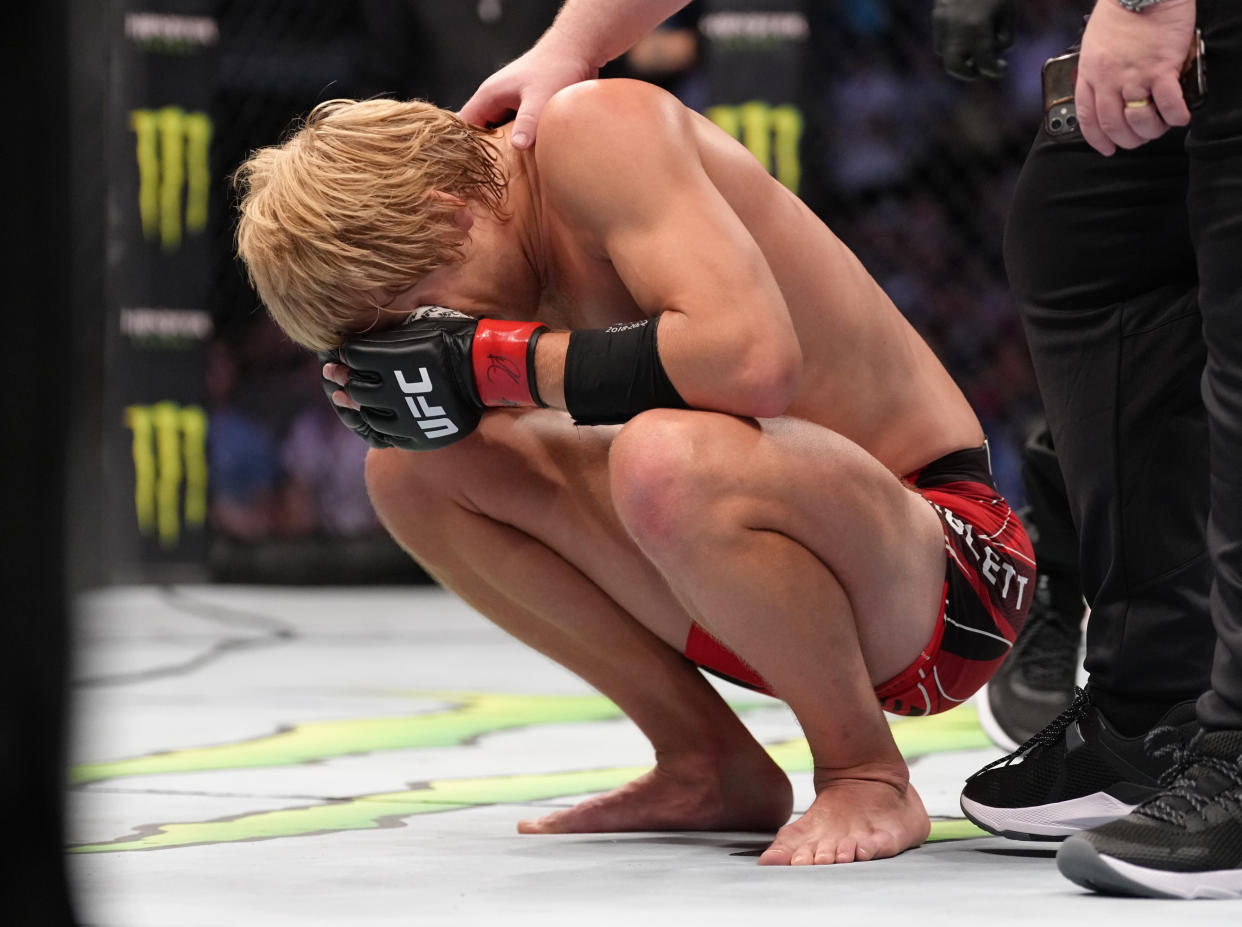 Editor’s note: If you or someone you know is having thoughts of suicide, the National Suicide Prevention Lifeline is available 24 hours a day at 988.

It would have been easy, certainly understandable, had Paddy Pimblett withdrawn on Friday from his fight with Jordan Leavitt that was scheduled for the main card of UFC London at The O2 Arena.

Early Friday morning, five hours before the weigh-in, Pimblett was awakened by the kind of text message no one wants to receive.

“I woke up on Friday morning [at] 4 a.m. to a message that one of my friends back home had killed himself,” Pimblett said in the Octagon after finishing Leavitt with a rear naked choke in the second round Saturday. “This was five hours before my weigh-in. So Ricky, lad, that’s for you.”

The sell-out crowd roared, as it did for literally everything Pimblett did on Saturday, from ecstatically cheering friend Molly McCann’s knockout to all of his moves in the fight with Leavitt.

But Pimblett wasn’t done and he wasn’t going for a quick score. He then spoke some of the most important, and significant, words ever spoken in the Octagon.

There is a serious mental health crisis, not just in the United States but around the world. The U.S. recently set up a telephone number, 988, for people to call toll-free if they’re having issues and need to speak to someone.

We can see an injured knee and understand the devastating impacts that cancer has upon the body. But because mental health issues aren’t quite so obvious, too many of us brush aside their significance until they’re too late.

It’s too late to find support for Pimblett’s friend, who was clearly fighting demons no one else could see.

Pimblett, though, shed light on the situation. No one should ever feel too macho to talk about how they’re feeling or to seek help for problems that seem overwhelming. There’s always help and always someone who cares, even if it doesn’t seem like it.

That’s where sports stars and celebrities come in. They can remind us that it’s OK, that mental health issues are just a part of life and that the right thing to do is to always — always — seek out help.

Fighting for something bigger than himself ❤️ #UFCLondonpic.twitter.com/A7aNUFgvPU

“There’s a stigma in this world that men can’t talk,” said Pimblett, fighting back tears. “Listen, if you’re a man and you’ve got weight on your shoulders, and you think the only way you can solve it is by killing yourself, please speak to someone. Speak to anyone. People would rather — I know I would rather — my mate cry on my shoulder rather than go to his funeral next week. So please, let’s get rid of this stigma. And men, start talking.”

Pimblett has a chance to be a huge star because of his ability to talk. He’s now 3-0 in the UFC with three finishes, but there are fighters with more skill, more potential. But Pimblett is an entertaining fighter who has a fun style and knows how to play to the camera.

He gets people interested in the fights. If you make people care, it’s more than half the battle of becoming a star.

But trash talking and making jokes like Pimblett did all week is one thing. At the weigh-in Friday, he offered his hand to Leavitt, only to pull it away as Leavitt went to shake, causing the crowd to laugh and cheer.

If that’s all he did, it would have been a good night for him. But Pimblett stood up and talked about an issue that touches lives around the world. 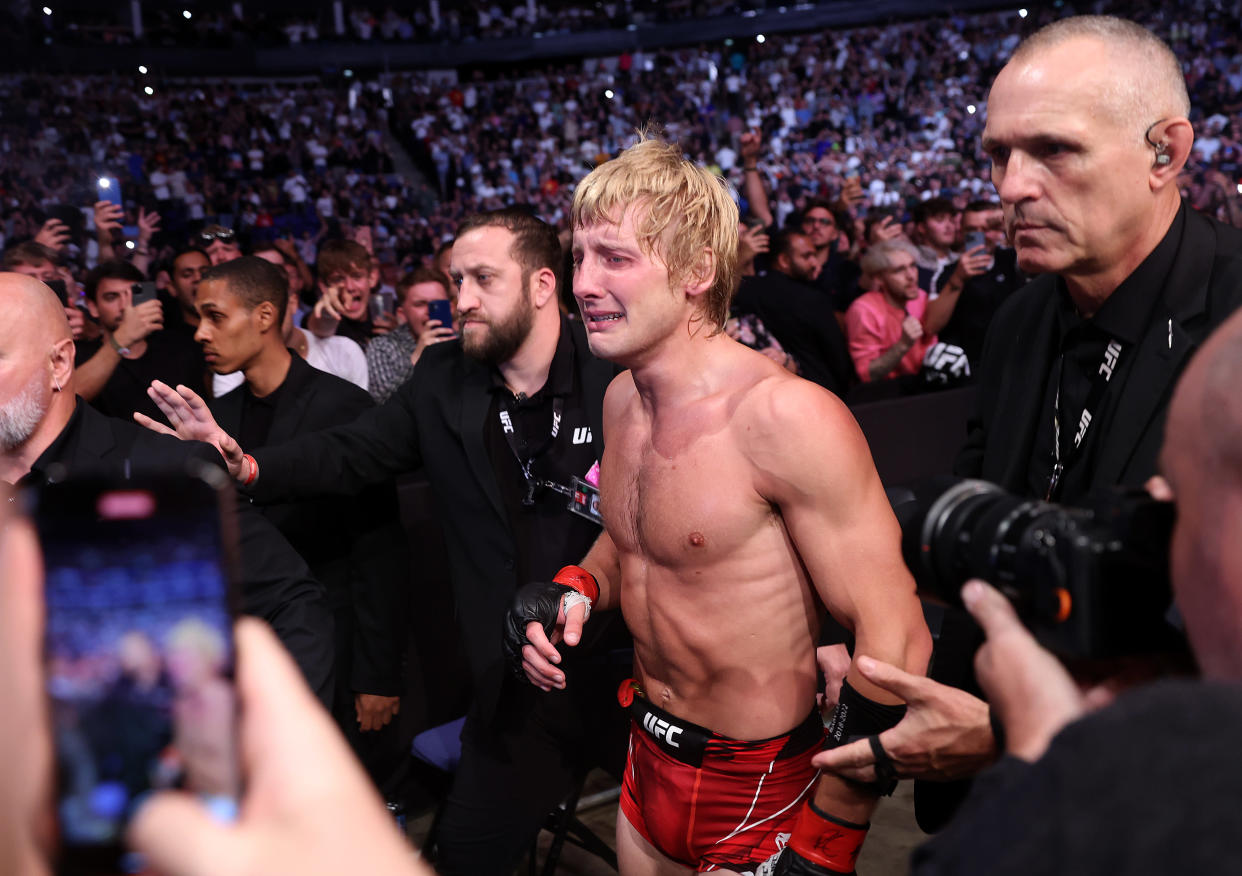 He could have called the UFC on Friday and pulled out of the fight and spent Saturday in the comfort of friends and family, mourning his loss.

But by doing what he did, Pimblett may well have saved other lives. That act alone, those 40 or so seconds he spent talking into the microphone, will have more impact than anything he does in his career.

He was a hero to many in the U.K. already because of his personality and his fighting ability and accomplishments.

He became a hero to a lot more folks, though, who may never have given him a second thought, when he showed his humanity by publicly discussing a touchy issue too many shy away from.

Suicide is never the answer but the first step to avoiding it comes when you realize that help is never far away.

The reminder that Pimblett gave Saturday is priceless.