Oxford and Exeter universities are at the top of a ‘rape culture’ league table compiled from more than 1,000 testimonies from students.

The Everyone’s Invited website, which publishes accounts of sexual abuse and harassment, released the data yesterday to highlight the problem on campuses.

It said rape culture is ‘endemic’ at universities and praised the ‘courage’ of young women who had come forward to share their stories.

The website released a list of 17 universities mentioned in more than five testimonies, almost all of which were in the elite Russell Group.

The Everyone’s Invited website, which publishes accounts of sexual abuse and harassment, released the data yesterday to highlight the problem on campuses (stock image)

Exeter was at the top, having been mentioned by 65 students. 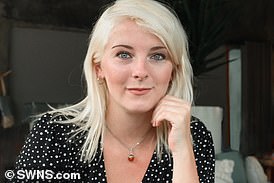 By Andrew Levy for the Daily Mail

A leading grammar school has apologised after being accused of breeding a ‘toxic and ubiquitous rape culture’ by a former pupil.

Scarlett Mansfield, 26, pictured, said she and other female former pupils had been left ‘traumatised’ by their time at Colchester Royal Grammar School in Essex.

Allegations include a ‘rape society’ set up by boys to discuss unsavoury topics and a pupil twice locking himself in cars with girls and refusing to get out until they performed a sex act on him. One ex-pupil claimed to have been raped at a party when she was 15.

Miss Mansfield joined the school, which regularly tops A-level league tables, in 2011. The freelance writer, who has a master’s degree from Oxford, said: ‘I moved to CRGS for the sixth form under the promise that it offered the best education money can’t buy.’ But, she found that ‘an undeniable toxic and ubiquitous rape culture was prevalent’.

John Russell, who became head in 2015, said he was ‘shocked and saddened’ by the ‘wholly unacceptable behaviours’ experienced by some female pupils and urged any victims of crime to contact police.

Oxford, in second place, was mentioned 57 times and Edinburgh and Leeds 53 times each.

A website spokesman said: ‘We are encouraged that university students have found the confidence to come forward and share their testimonies. Many people find that the act of sharing their story helps them in many ways. From the testimonies it is clear that rape culture is endemic on university campuses across the UK.’

A list of all 108 universities mentioned at least once has also been released and it includes most UK institutions as well as some abroad.

The 1,035 new testimonies from students were received in one week.

It comes after elite private schools including Westminster, St Paul’s, Eton, Dulwich College, Latymer Upper, Highgate and King’s College, Wimbledon, and state schools such as The London Oratory were named in 12,000 anonymous testimonies on the website.

Some have called in police to investigate the claims of rape and sexual abuse and harassment.

The Government has instructed Ofsted to conduct an emergency review of schools’ safeguarding procedures.

The website spokesman added: ‘We want to continue to expose the prevalence of rape culture across all of society.’

One testimony from an Oxford student described how, after a party in 2020, a housemate took advantage of her. ‘I went to my room, and he came in and started kissing me,’ she said.

‘He started to have sex with me and I quickly sobered up. I asked him to stop and he ignored me. I spent the entire time crying and he only left when another housemate came to check on me.’

A Russell Group spokesman said: ‘No student should feel unsafe or have to tolerate harassment or sexual misconduct. Our universities take this issue incredibly seriously and provide a range of support to help students feel safe. Where a crime has been committed it should be reported to the police.’

A University of Exeter spokesman said: ‘We have made it clear to all members of our community that we have zero tolerance for sexual harassment, abuse or assault, and that criminal or disciplinary proceedings will be brought against those who commit these offences.’

More than 1,000 testimonies were sent in to Everyone’s Invited in one week. As many as 86 British universities were named, ITV reports. Those without a number had five submissions or less:

University of the West of England

University of the Arts London