Official tells Ukrainian family to 'Clear off!' as they try get to UK

EXCLUSIVE: British official tells Ukrainian family of nine to ‘Get back in your expensive car and clear off!’ as they try to get to UK – while mother and daughter are also turned back after 1,500-mile drive from war zone

A British official has been accused of telling a Ukrainian family of nine to ‘get back in your expensive car and clear off’ as they desperately tried to get into the UK.

Vadym Chernets, 45, arrived at a British immigration advisory point for Ukrainian refugees located in Calais port with his wife Olena, 45, their six children, one boy and five girls aged between seven and 23 and his seven-month-old granddaughter.

His 23-year-old daughter Natalka is currently pregnant with her second child.

The family fled Kyiv last week in a Mercedes people carrier and slept in it as they made their way to Calais hoping to reach the safety of Britain.

But after being told by British Border Force staff that they could not apply for a visa because they did not have any relatives in the UK, one heartless official hollered within earshot of Mr Chernets: ‘He can get back in his expensive car and clear off and go wherever he wants.’ 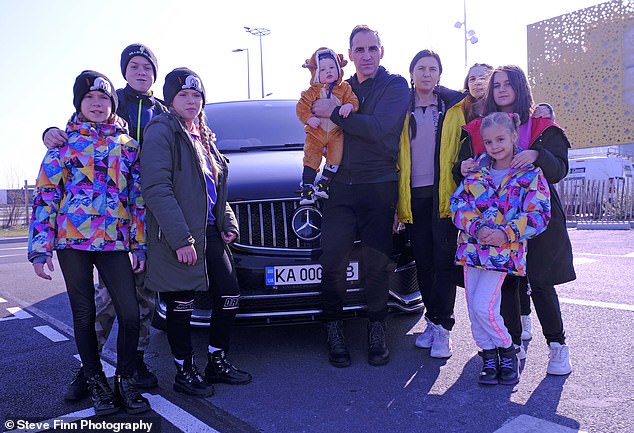 Vadym Chernets (pictured with his family), 45, arrived at a British immigration advisory point for Ukrainian refugees located in Calais port with his wife Olena, 45, their six children, one boy and five girls aged between seven and 23 and his seven-month-old granddaughter

And a mother and daughter who had also fled war-torn Ukraine have told of a similar experience when they were turned away from the UK border with a shrug.

Alena Semenova, 22, and Tetyana Tsybanyuk, 40, from Kyiv, escaped the conflict and drove over 1,500 miles to a ferry port in Calais only to be told they could not make the crossing without a visa.

The two women have been offered sanctuary with Ms Semenova’s godparents Graham and Alla Blackledge, who live in Glasbury-on-Wye, near Brecon.

But when they told officials they were refugees and were seeking asylum in Britain, the border guard they were talking to is said merely to have shrugged.

The Home Office has been criticised in recent days for its slow response to the refugee crisis in Europe, revealing on Monday how it had granted only 300 visas of over 17,000 applications which have been started.

The British official made his comment about Mr Chernets and his family after being asked by MailOnline where the family could go after their hopes of getting to the UK had been dashed.

Mr Chernets told MailOnline: ‘I was shocked to hear that. These officials don’t care about us, they are just obsessed about procedures and sticking to the system. I thought the British would welcome us, but I feel that they have insulted me given what we’ve gone through.

‘We just about escaped Kyiv with our lives and the children saw some terrible things. My eldest son is still there because he has chosen to fight against the Russians.’ 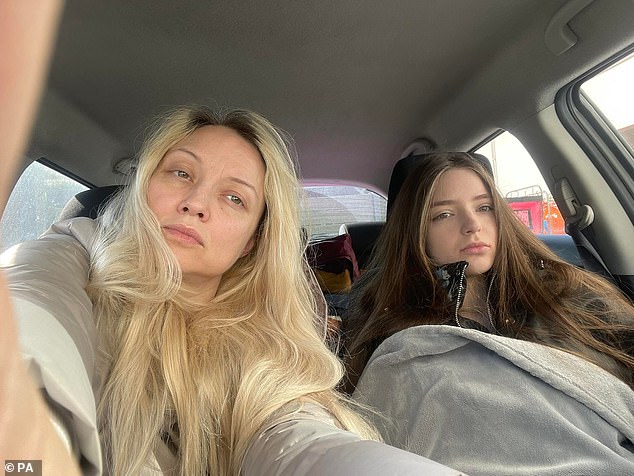 Alena Semenova, 22, and Tetyana Tsybanyuk (pictured together), 40, from Kyiv, escaped the conflict and drove over 1,500 miles to a ferry port in Calais only to be told they could not make the crossing without a visa

Businessman Mr Chernets revealed that he was hoping to go to Britain because he wanted to be in an English-speaking country and ‘respects’ its laws and culture.

Under Government rules, only Ukrainians who have family in Britain or a willing sponsor are allowed to apply for visas.

The Government has refused to ease visa requirements for Ukrainians fleeing the war, despite coming under fierce criticism.

Ukrainians arriving at the immigration advisory point in Calais port are being told that they have to go to Paris or Brussels to apply for visas and that it will take at least a week before they are issued.

Mr Chernets added: ‘Britain is a country that I have always admired. We wanted to learn English and build our lives there until it is safe to return to Ukraine. I know I don’t have any family in Britain or know anybody who might sponsor me, but I don’t understand why the Government can’t change the rules and help us.’

As the family returned to their Mercedes vehicle after being turned away by immigration officials, Mr Chernets revealed that he was now considering his options of which country they will head for. 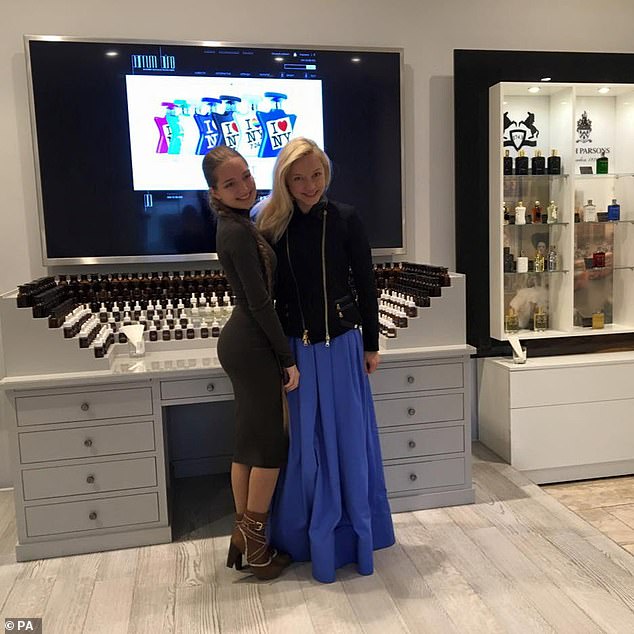 Ms Semenova, who was a medical student before Russia invaded her home country, and her mother are now stranded in France

He added: ‘We might stay in France or go to another European country; I don’t know yet. I’m still trying to process this news that Britain doesn’t want us.

‘Fortunately, I’m doing OK financially so we will book into a hotel and consider what we do next.’

Authorities in Calais have revealed that almost 300 Ukrainian refugees trying to reach the UK have already been turned back at the French border by British Border Force officials.

Hundreds more are trying to complete paperwork for the visa that will allow them to cross the Channel by tunnel or ferry with the British Government setting up a special visa processing facility in Lille.

Under the current scheme only close family members of British citizens may be allowed entry to the country. Countries within the European Union have now granted Ukrainians ability to freely travel between states even if they do not possess the legally required biometric passports.

Ms Semenova, who was a medical student before Russia invaded her home country, and her mother are now stranded in France.

With little money, they are sleeping in their car and surviving on two meals of porridge a day.

Ms Semenova said they constantly check the UK Government website for news that Ukrainians without family in the country can apply for a visa.

Speaking to PA news agency, she said: ‘I am very upset and depressed. The wait drags on, but nothing happens. I have an overwhelming fear about the future.

‘We are running out of funds and we hope that we will have money for gasoline when the situation changes and we are allowed to come to Alla and Gram. 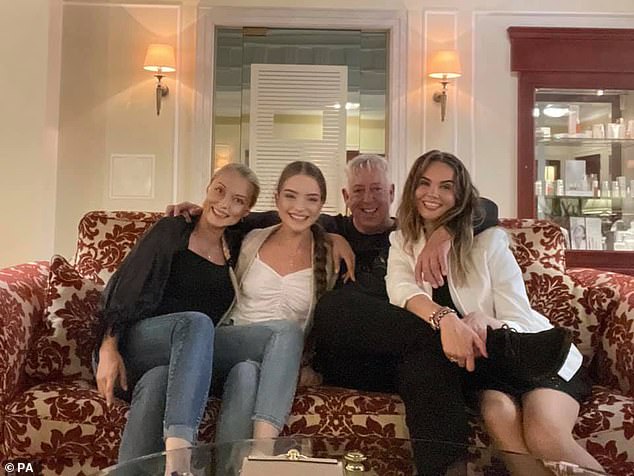 Ms Semenova said they constantly check the UK Government website for news that Ukrainians without family in the country can apply for a visa. Tetyana (left) and Alena (second left) are pictured with Graham and Alla Blackledge, Alena’s godparents who have offered the pair sanctuary in Glasbury-on-Wye, near Brecon

‘Because of the long wait, my mother cries all the time and says that she is afraid to die and what will happen to me then. I calm her the best I can.’

In a diary, Ms Semenova documented the gruelling and dangerous route she and her mother decided to take after being woken up on February 28 to the sound of rockets flying over their house.

Despite long queues of cars to leave the city, they managed to get to Lviv and crossed into Poland. From there they drove through Germany, the Netherlands and Belgium before they reached France, arriving in Calais at around 10pm on March 1.

On the same day, pictures emerged of the TV tower outside their apartment complex being bombed.

‘We couldn’t believe we did it. We were so happy that we would soon hug Graham and Alla and all our troubles and fears would be behind us,’ Ms Semenova said.

‘We arrived at the port, bought a ferry ticket. A girl from Irish Ferries helped us figure out how to buy a ticket and fill out passenger information, in which we indicated that we were going to Wales to visit people close to us.’

Although they were allowed through French passport control, they were pulled aside at the UK border control and asked to leave their car and follow officials into the office.

Ms Semenova said: ‘We did not understand what was happening, why we were detained as criminals.

‘By 1am, when our ferry had already left, an employee of the British border guard approached us and said that we would not be allowed on the ferry because we did not have a British visa.

‘We said that we had travelled almost 2,500km because there was a war in our country and the only people close to us in all of Europe lived in Wales and that they were waiting for us there.

‘But the border guard officer shrugged her shoulders and said that they would not let us through without a visa.’

The women now remain just outside of Paris waiting for a phone call from the Home Office which they have been told will come but has not yet happened. They say they are often being harassed by French police officers suspicious of their presence.

Mr Blackledge, a chiropodist who moved to Brecon from Leeds in 1988, married his wife Alla in Kyiv in 2016. Mrs Blackledge had worked as a lawyer in Ukraine and had to flee to Kyiv from the Dombas region in 2014 when fighting between the government and pro-Russian separatists broke out.

Mrs Blackledge, who had been applying for British citizenship when the current war began, has a number family members who remain stuck in Ukraine because they now believe it too dangerous to leave.

Mr Blackledge said they are desperate to bring their goddaughter to safety: ‘Despite all the bravado from the MPs, whether it’s English or Welsh ones, it’s just talk, and talk’s cheap. Nobody’s turned around, as far as I am aware and said, ‘Here’s two people who’ve already suffered enough. I’m going to do something about it and get them over here’.’

The couple said they have been getting support from people in the local area, with many saying they would offer Ukrainians a place to stay, but said the attitude of the UK Government was different from that of its citizens.

In a plea to Boris Johnson and his Cabinet, Mr Blackledge said: ‘I ask you to take a step back and look at the suffering and the pain that the Ukrainians are going through and ask that as a human being you extend help.

‘Let them come over, house them, feed them, look after them. And then if you want to start processing them, but in the first instance help.

‘And to accuse those seeking sanctuary in Britain of perhaps being Russian spies trying to infiltrate the UK, you should be ashamed of yourself.’

A Home Office spokesperson said: ‘Last week we announced a new sponsorship route which will allow Ukrainians with no family ties to the UK to be sponsored to come to the UK.

‘This is alongside our Ukraine Family Scheme, which has already seen thousands of people apply, as well as changes to visas so that people can stay in the UK safely.

‘The routes we have put in place follow extensive engagement with Ukrainian partners. This is a rapidly moving and complex picture and as the situation develops we will continue to keep our support under constant review.’