The lawyer for three police officers accused of breaking a man’s neck and rendering him quadriplegic during an arrest want to explore the possibility that the injuries had another cause.

In November 2017, police were called to the Warrnambool home of Chris Karadaglis after a noise complaint. Mr Karadaglis, who was 47 at the time, was left paralysed from the neck down after he was allegedly handcuffed, put in a headlock and brought to the ground. 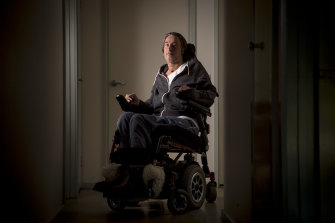 Chris Karadaglis was left paralysed from the neck down.Credit:Eddie Jim

The three officers appeared side by side at Warrnambool Magistrates Court on Friday. During a brief hearing, solicitor Tony Hargreaves said he was seeking crime scene evidence that was left out of the police brief of evidence, including blood samples and photographs of holes in plaster walls and “experiments” later done by crime scene officers to see if a head would fit inside.

“We’re seeking to explore an alternative possibility as to how the trauma was sustained to Mr Karadaglis,” Mr Hargreaves said. “Apart from the house being generally trashed, there are holes in the plaster that are consistent with the size of a head.”

Magistrate John Lesser also heard allegations that a nurse who was working at the hospital where Mr Karadaglis was taken after his arrest believed the injured man was “foxing” and “feigning” his condition.

That nurse, alongside up to 20 other witnesses, is to be called to give evidence at an upcoming committal hearing.

Mr Hargreaves said during that hearing they would also seek to question the nurse on when Mr Karadaglis was or was no longer able to move as “precisely what happened before then is unclear”.

“Based on [the nurse’s] observation of Mr Karadaglis and what was told to him by two attending ambulance officers … he formed the view that Mr Karadaglis was … feigning his symptoms,” he said.

Mr Hargreaves said he wanted to ask about the nurse’s “observation of any movements”.

The matter will return to court for a 10-day committal hearing in late 2022, with a date to be fixed.

The court heard it was likely the committal would be held at Melbourne Magistrates Court, or with a magistrate that was not from south-west Victoria, where the accused officers are employed.