Shocking surveillance footage from New York City caught the moment a woman attempted to fight back after a man came up behind her and groped her buttocks while she was walking down a Brooklyn street.

NYPD Crime Stoppers released video on Monday depicting the unidentified male suspect sought in connection to a forcible touching that happened on the corner of South Fourth Street and Havemeyer Street in the New York Police Department’s 90th Precinct.

Footage captured at 2:15 a.m. Sunday showed the man approach the 26-year-old female victim from behind and forcibly grab her buttocks.

The woman, who was looking down on her cellphone as she walked, appears startled as the man grabs her from behind – but then quickly pushes him back. Video shows she then lunges toward him and swings at him, but the man quickly delivers blows of his own back. 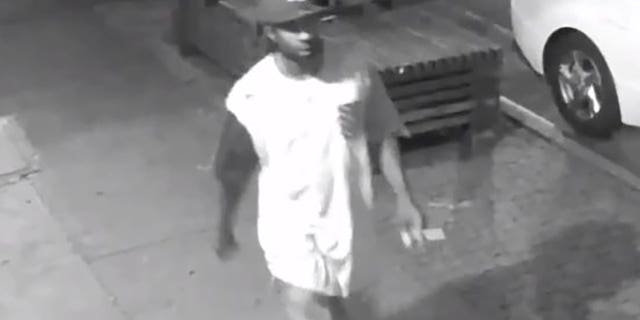 The woman briefly falls to the ground, before getting back up as the man punches her several more times. She gets knocked back and falls into the wall but remains on her feet. And the man finally walks off.

Surveillance footage from a different angle captured the man’s face as he walks alone down the block.

Police are offering a reward of up to $3,500 for information. Those with knowledge of the incident or the suspect are asked to call 1-800-577-TIPS.